Despite a slow start to the year with regard to Mac-related news from Apple, there's been no shortage of Mac hardware and software announcements this month, in the run-up to the NAB show.

The National Association of Broadcasters (NAB) show, held annually in Las Vegas, has become an important event for Apple in recent years, as the company continue their assault on the video-editing market. Indeed, Apple announced that they would again hold a special event on the day before the main exhibitions opened, on Sunday 15th April, and, as usual, there was much speculation as to what would be announced. 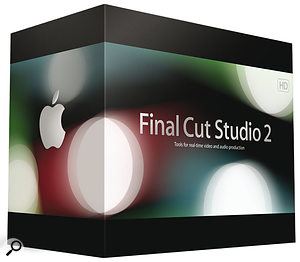 Since last year's NAB show saw the introduction of the 17-inch Macbook Pro, and because a month before NAB there had been no announcements regarding the anticipated Mac Pro featuring Intel's latest quad-core processors, I expected to see an eight-core Mac Pro introduced at this year's show. In fact, I was so confident that I bet a friend $25 that this would indeed be the case. But on April 4th (just 11 days before Apple's NAB event), Apple introduced an eight-core Mac Pro — and I lost $25!

Eight Heads Are Better Than One

The eight-core Mac Pro features two of Intel's 5300-series 'Clovertown' Xeon processors, and although these processors have been shipping in the non-Mac workstation market since the beginning of the year, Apple are the first company to offer a system featuring 3GHz versions. Similar to the 5100-series dual-core Xeons that offered a 4MB Level-2 cache, each 5300 has an 8MB Level-2 cache, which, thanks to Intel's Core micro-architecture, can be shared intelligently amongst all four cores. The front-side bus speed remains the same as the 5100-based systems, with each processor running on a 1.33GHz 64-bit bus. 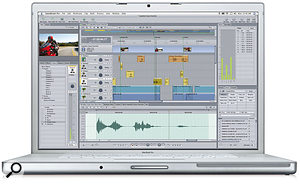 With version 2, Apple's Soundtrack Pro is turning into a powerful tool for audio post-production, while maintaining its intuitive, single-window interface.Aside from the new quad-core configuration, the Mac Pro remains mostly the same, with the previous 2.0, 2.66 and 3GHz dual-core configurations still available with the same pricing. This is just as well, since the eight-core model has a high-end price to match its high-end performance: choosing the quad-core chips adds £960 to the £1699 base price of a Mac Pro — and that's before you start upgrading the memory or storage options.

Speaking of storage, it's now possible to order a Mac Pro with 750GB drives (previously, the highest capacity available from Apple was 500GB), making it possible to have 3TB of internal storage if all four drive bays were occupied. Choosing a 750GB drive for bay one will cost you an extra £189 over the default 250GB drive, and in bays two to four each drive costs £319, instead of £209 for the 500GB drive. A fully-loaded Mac Pro would thus set you back £6764, with 16GB RAM, four 750GB drives, two optical drives and the ATI X1900 512MB graphics card, but you'd get one hell of a machine for your money. The only question is whether you can make use of this extra power with the software you're currently using.

While I haven't tried an eight-core machine yet, I would expect software like Cubase and Pro Tools to scale well and give you full use of the eight cores, assuming that the current versions recognise and utilise all eight. However, if you're a Logic user, the current version of the software (7.2.3 at the time of writing) still doesn't make full use of all the processing available on a quad-core system, so I wouldn't expect much difference in performance between running Logic on a quad-core Mac Pro and running it on an eight-core system at this stage. I'm sure the situation will change with the next version of Logic that Apple are rumoured to be working on.

So with an eight-core Mac Pro already available from the Apple store, Apple's full focus at NAB was the introduction of new asset-management server software called Final Cut Server, and a major new version of Final Cut Studio (FCS), the suite of 'Pro Apps' for those working with video. Final Cut Server seems to be based on Proximity's Artbox system (Proximity was acquired by Apple in December of last year) and will be available in two versions this summer: a 10-user version for $999 and an unlimited client version for $1999. While this software is currently aimed at higher-end users who need quick access to a large number of video assets, I still have a hope that one day Apple might use the technology for music and audio workflows. 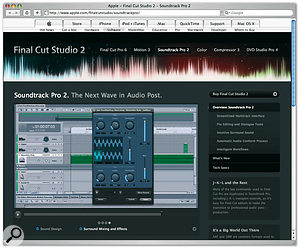 Apple's web site provides detailed information about all the products in Final Cut Studio 2, including Soundtrack Pro 2, which you can see here in a video that explains the new surround mixing and effects features. Of particular interest is a new look for Logic Pro's Sub Bass plug-in.

FCS 2 sees major updates to all of Apple's bundled video applications (with the exception of DVD Studio Pro, which remains at version 4) and the introduction of a new colour-grading application called, simply, Color (one can also live in hope that the European release might use the appropriate British spelling). Color comes from Apple's acquisition of Silion Color's Final Touch last October, and what's particularly interesting is that although Final Touch was originally available at three different price points, ranging from $1000 to $25,000, Apple have bundled it as a new member of the FCS family effectively for free, as the price of FCS remains at £849. Upgrades from the original FCS are available for £329 — half the cost of the cheapest version of Final Touch.

Final Cut Pro 6 (FCP 6) has many new improvements, such as the ability to mix and match different video formats in the timeline, and support for GPU-accelerated FxPlug effects plug-ins previously used by Motion. Motion 3 has been enhanced to allow the creation of 3D animations and (of interest for those who followed the recent tutorials in Apple Notes on creating custom visualisations that respond to MIDI and audio) now features Audio Behaviours that let you create graphics that respond to an audio track.

FCS 2 also contains the latest version of Soundtrack Pro, the application that will be of most interest to musicians and audio engineers. Originally bundled with FCP 4 in 2004, Soundtrack later became available as a stand-alone application aimed at helping people to create loop-based music for video soundtracks. Then, with the introduction of FCS in 2005, Soundtrack became Soundtrack Pro and started to evolve into an audio application that could take care of all your post-production needs, with features such as restoration tools to help with editing dialogue tracks, for example. Now Soundtrack Pro 2 continues this trend, adding powerful tools such as a multi-lane editor for compiling a track from multiple takes, full support for 5.1 tracks and buses, and (something that will be welcomed by users of the original Soundtrack Pro) the ability to record on more than one track simultaneously.

Soundtrack Pro 2 can also automatically conform a project against picture edits made with FCP. To add a soundtrack to your project you simply use the 'Send to Soundtrack Pro' command in FCP, as before; but if you make edits in FCP, use the command a second time, so that you have two projects in Soundtrack Pro. Now you can conform the edit information in the newer project against the content in the first project, to create a third project that contains the original content conformed to the newer edits. It'll be great to see this in action once FCS 2 is shipping.

The Shape Of Things To Come?

With many musicians currently speculating on what the next version of Logic will offer, Soundtrack Pro 2 potentially provides a glimpse into Apple's thinking, especially since it offers many features not available in Logic Pro right now. These features include better surround handling, like the ability to work with surround audio files and surround versions of plug-ins such as Space Designer (the version that ships with Logic Pro right now only works in stereo). And staying on the subject of plug-ins, watching the videos that describe Soundtrack Pro 2 on Apple's web site shows a new look for many of the included Logic Pro plug-ins, along with a new way of managing presets.

If nothing else, Soundtrack Pro 2 perhaps gives an indication of what Logic Pro is not likely to become: namely, an application that competes with Pro Tools in audio post-production. Of course, while that's pure speculation, it makes more sense for Apple to focus Logic Pro on music creation and Soundtrack Pro on audio post-production, which is what they currently seem to be doing, rather than try to make one application to carry out both tasks, as Digidesign are currently trying to do with Pro Tools.

Unfortunately, while Soundtrack Pro was previously available as a stand-alone product (see Paul White's review in November 2005's SOS, www.soundonsound.com/sos/nov05/articles/soundtrackpro.htm), at the time of writing it doesn't seem that this will be the case with the new Soundtrack Pro 2. Although FCS 2 is undoubtedly exceptional value for money if you have any interest in video, its price tag may be a little steep if you're only interested in Soundtrack Pro.

The introduction of an eight-core Mac Pro wasn't the only Mac-related news from Apple before the NAB show, although Apple's second announcement wasn't nearly so warmly welcomed by the Mac community. In order for Apple to meet the June release date of the iPhone, said a statement released at the show, software engineering and quality assurance resources have had to be reassigned from the Leopard group to the iPhone group. What this means is that Leopard will no longer ship in June at Apple's Worldwide Developer's Conference, as was originally intended, and developers will instead receive a feature-complete beta, with the final version to be released in October.

Personally, despite the outcry of many Mac devotees, I have to admit that I don't think a four-month delay is such a big deal, and it actually might be a really good thing. Considering that the Mac community has just got through the transition to Intel-based Macs, with musicians and audio engineers having to wait not only for application updates but also for drivers, copy protection and plug-in compatibility, I'm not anxious to go through the inevitable turbulence of another major OS upgrade just yet. Because, let's remember, Leopard isn't just another OS update, it's the first version of Mac OS X that will bring true 64-bit computing to all Mac users (who have 64-bit processors in their Macs, of course).

As we've mentioned before, although current versions of Max OS X allow 64-bit applications to be created, they have to run from the command line and cannot support the majority of Mac OS X's functionality, such as graphical user interfaces or Core Audio and MIDI. While this is fine for some applications, where developers can create a 32-bit front end (which the user sees) that communicates with a 64-bit back end (which is hidden), it isn't really suitable for general applications or music and audio software.

It will all change in Leopard, allowing true 64-bit versions of the applications we use on a daily basis, such as Pro Tools and Logic, to be made available. So what's good about the Leopard delay is that it effectively gives extra time for third-party developers, who have been receiving builds of Leopard since last year, to ensure that their products are Leopard-compatible when the new OS is actually shipping.

Only time will tell if this is an overly optimistic stance to adopt, as on the Windows platform, which has been fully 64-bit for many years, the only major developers to have a true 64-bit release are Cakewalk, with Sonar. This is partly due to the length of time it has taken for 64-bit audio and MIDI drivers to be released for Windows.