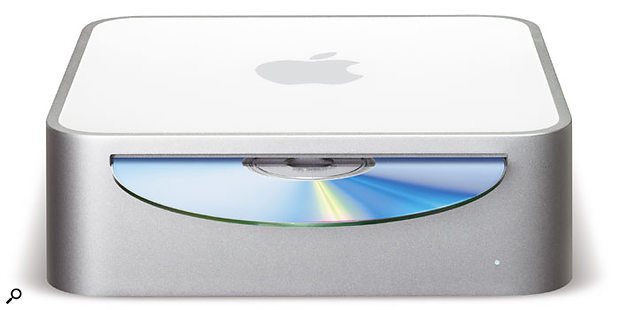 The Mac mini is the smallest Macintosh computer Apple have ever produced — in terms of both physical size and of price.Photo: Apple

Apple kicked off a potentially exciting year for their customers at the 2005 Macworld show in San Francisco with a host of new and updated products, including the most affordable Macintosh computer the company has ever brought to market.

The jungle drums were beating louder than usual this year when Apple CEO Steve Jobs took the stage at the beginning of January to deliver his keynote speech during the Macworld show in San Francisco. As the rumours had predicted, the presentation was completely orientated towards the consumer market, with Jobs introducing a new iPod and a cheap, headless Mac computer on the hardware front. Turning to software, highlights included a major update to iLife; a new word processing application called Pages, which was combined with an update to the Keynote presentation software to form a new suite called iWork; and Final Cut Express HD, which adds support for 1080i and 720p HDV video formats and now includes a copy of Soundtrack, Apple's loop-based music production tool.

Aside from the aforementioned product announcements, one interesting point in the keynote was Jobs' demonstration of the forthcoming Mac OS X Tiger, including a brief overview of Quicktime 7, which the Apple CEO described as "the most major update to Quicktime in the last decade". The Quicktime Player application now supports live window resizing, allowing you to still see the image playing while you resize the Player window, along with the ability to use screen overlay controls when in full-screen mode. Additionally, this application will now include the facility to record simple audio and video clips, with a feature to easily share and email Quicktime content to other people.

In terms of the actual Quicktime technology, Quicktime 7 will bring up to 24-channel support for surround sound, and Jobs stated that the surround audio output will be down-mixed automatically if a user has fewer speakers in their system than the content being played back. The new Quicktime will also be fully MPEG-4 compliant, will offer 1920x1080 24p (24 frames per second progressive scanning) HD video playback, and will include H.264, a high-quality and efficient codec that's easily scalable for playback on anything from 3G mobile phones to HD video systems.

Perhaps the biggest pre-show buzz this year concerned the speculation that Apple would introduce a new and cheaper line of Macs, targeting users who might already have a computer (notably Windows iPod customers), but not necessarily a Mac. Jobs didn't disappoint in his keynote, with the announcement of the Mac Mini, a sub-$500 Macintosh computer that the Apple CEO described as BYODKM: Bring Your Own Display, Keyboard and Mouse — since it includes none of these latter three peripherals.

Perhaps the most astonishing aspect of the Mac Mini is just how mini the Mac ends up being, at only two inches high and six-and-a-half inches square. Apple offer two basic models with either a 1.25 or 1.42GHz G4 processor, attractively priced at just £339 and £398.99 — literally the cheapest Mac the company has ever produced. Both models come with 256MB of PC2700 (333MHz) DDR SDRAM installed. This is perhaps the only downside to the Mac Mini, since OS X really doesn't run to its full potential with this amount of memory, although the 256MB chip can be removed and replaced with either 512MB or 1GB instead (the Mac Mini only has one memory slot). The new baby Mac features ATI Radeon 9200 graphics with 32MB of DDR SDRAM and AGP 4X, which supports resolutions up to 1920 x 1200 (a 23-inch Cinema Display, for example), and offers a Combo drive (a Superdrive is available in build-to-order configurations) plus either a 40GB or 80GB hard drive for the two models respectively. In terms of networking, the Mac Mini has a 10/100 Ethernet port, a 56k modem, and Airport Extreme and Bluetooth available as build-to-order options. For general connectivity, there's a Firewire 400 port, two USB 2.0 ports, a DVI output with an included VGA adapter, and a headphone output.

Although the Mac Mini is indeed the cheapest Mac ever, it doesn't take long to realise that the cost mounts up very quickly once you start building your dream Mac Mini at the Apple Store. By the time you've added more memory, Airport Extreme and Bluetooth, for example, the cost in America was nearly $1200 — double the price of the basic machine you might have started with! Fortunately, though, Apple were quick to respond to the cost criticisms and lowered the prices of the build-to-order options a couple of days after the Mac Mini went on sale. In the US, for example, they reduced the cost of the Bluetooth and Airport Extreme option by $30 and, most significantly, the 1GB upgrade by $150.

As with the iMac, while the Mac Mini is aimed at the consumer market it could still be a good entry-level machine for running, say, Logic Express. But a more interesting potential use for a Mac Mini could be as a Logic node, expanding the processing power available to an existing Mac-based music production set-up. The one problem with this application, though, is that Apple recommend G5-based systems with Gigabit Ethernet (1000Mb/s) as Logic nodes, whereas Mac Mini is obviously powered by a G4 and has Ethernet that operates at a maximum of 100Mb/s. That's not to say it won't work at all, though, and one thing I'm interested to investigate is whether networking the Mac Mini to another Mac via its 400Mb/s Firewire port makes this a viable system. If so, once a Mac Mini is configured to run Logic Node on start-up, it could run as the equivalent of a TC Powercore for hosting extra instances of Logic 's plug-ins. Watch this space.

My own Mac Mini arrived just as I was finishing this column (how could I resist?), a few days after the 22nd January introduction, which is a definite advantage of living in the US. Look out for the full review.

Back To The Garage

Apple's last major update to the iLife bundle came exactly one year ago, during the 2004 Macworld San Francisco keynote, and this became branded iLife '04. It was, therefore, no surprise that this year Apple introduced iLife '05, including major new versions of all members of the iLife family except for iTunes, which remains at 4.7.1 for now. However, the most interesting application for musicians in iLife '05 is, of course, Garageband 2. 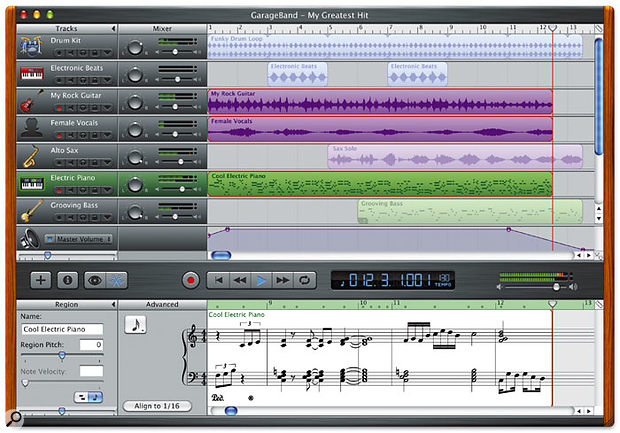 Garageband 2 will be the highlight for musicians in Apple's iLife '05 bundle and now allows multitrack recording, score editing and enhanced tools for correcting the pitch and time of your recorded performances.Photo: Apple

The new version improves on the original application, introduced a year ago, in many areas, and during the keynote Jobs brought singer-songwriter John Mayer on stage to help him with a demonstration. Garageband 2 adds the ability to record on more than one track simultaneously, and you can now carry out a multitrack recording of up to eight tracks at the same time in one pass. The piano-roll-style (or Matrix, in Logic speak) MIDI editor has been complemented by the addition of a music notation editor, which is perhaps no surprise, as this has been one of the Emagic developers' strengths since the days of Notator on the Atari, although it's perhaps a shame Jobs didn't demonstrate the use of the Fix Tempo feature after showing John Mayer's keyboard part being notated in real-time...

There are also new features for enhancing the timing and tuning of the music you record, starting with an inbuilt tuner, although if this doesn't help you get into tune there's also a new Auto-Tune-like facility. Following on from this, it's now possible to change the tempo and key signatures of an audio recording, and you can also save recordings as your own Apple Loops, to be available within Garageband and presumably other supporting applications, such as Logic and Soundtrack.

Apple has also introduced a new Track Lock facility in Garageband 2, which, as the name suggests, locks a track such that you can't make any more changes until it's unlocked again. However, the Track Lock feature also incorporates Logic-like Freeze functionality, so a track is automatically bounced to save on your computer's resources when you activate that track's Lock button. Last, but not least, Garageband can now import MIDI files and ACID-format WAV files. 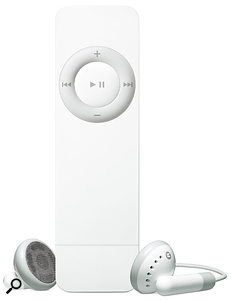 Shuffle your music with the new iPod Shuffle, a flash-based player with a 12-hour battery life, in a box the size of a packet of chewing gum.Photo: Apple

iLife '05 will be included with all new Macs, and the upgrade price for existing Mac users has been raised this year (compared to the previous iLife '04 upgrade) to £49, although I don't think too many people will grumble about this, as it looks like pretty good value for money, all things considered. I decided to buy a Mac Mini and get iLife '05 bundled for free; one of many reasons I'm not an accountant...

Staying with music, Apple also unveiled the iPod Shuffle, a flash-memory-based music player available with 512MB (£69) or 1GB (£99) memory. The Shuffle is so-called because the Shuffle Play mode on the iPod is apparently one of the popular ways people listen to music (so much for the 'album' format), and since the Shuffle doesn't feature a screen, playing random songs from a playlist is the most appropriate way of using the device.

Unlike previous iPod models, the iPod Shuffle offers a USB connection and is extremely small, at around the size of a packet of chewing gum. Other plus points include the fact that you can allocate a portion of the memory to use for data storage via USB, and a stated 12-hour battery life.