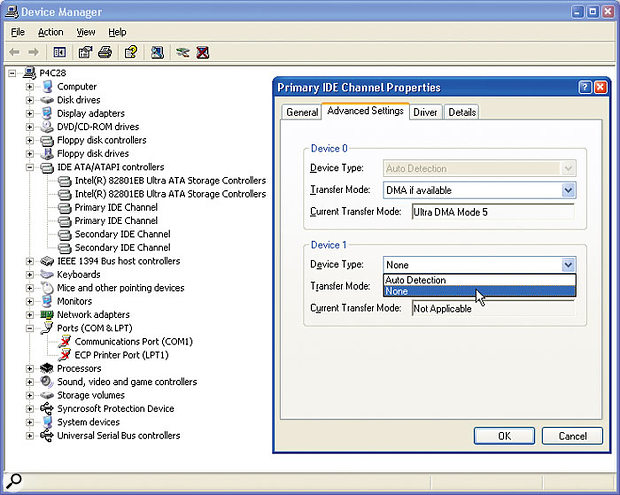 If you let Windows XP continue trying to detect hardware devices attached to every possible connector on your motherboard it can really slow down your PC's boot-up routine. The answer is to disable Auto Detection for devices you know are no longer connected.

Is PC processing power finally matching the aspirations of PC musicians? We debate the issue, as well as bringing you another crop of news, tips and ideas.

As I write this in early 2005, the year is predicted to be one of enormous turbulence for the hi-tech sector, with plenty more mergers, acquisitions, and alliances forecast. I'm sure part of the problem in the domestic PC market is simply that many people already have a computer that's quite fast enough for their purposes, and don't intend to update it in the near future. But are we musicians also getting to the point where processing power is finally keeping pace with our aspirations?

When I first started reviewing software-based PC effects, even a single reverb could only be applied as an off-line process because its CPU overhead was greater than 100 percent. Then, as clock speeds increased and coding algorithms became ever more optimised, real-time audio effect processing became possible (around 1997), and we were finally able to alter software reverb parameters and hear the results while we did so. This was a revelation!

Mind you, a decent reverb plug-in could still consume almost 100 percent of the resources of a Pentium 100MHz PC, and it wasn't until the next generation of processors (in my case, a 300MHz Pentium II in 1998) that we could run several plug-ins simultaneously, as well as a few voices from an early soft synth such as Native Instruments' Generator (the forerunner to Reaktor) or the (at the time) revolutionary Gigasampler, with its sample streaming.

By the time I bought my 1GHz Pentium III PC in 2001, Steinberg's Cubase VST sequencer was up to version 5 and already included a huge plug-in bundle and support for 32-bit/96kHz recording and playback, while real-time physical modelling without dedicated hardware was available from products such as AAS' Tassman, and analogue-style soft synths were even starting to appear from freeware developers. Fast forward another three years to 2004, when many of us were running processors with clock speeds of 3GHz or more, writing songs whose sounds were entirely created within or streamed via software and treated using further software plug-ins. The 'software studio' had finally become a practical reality.

How would you like to reduce your Windows XP booting time by more than half? That's what I managed to do this month, after becoming increasingly frustrated with how long I had to wait for the desktop to appear.

Back in April 2003 I described Microsoft's Bootvis tool for examining various aspects of XP's boot process, and at the time stated that after various optimisations my PC took just 37 seconds to reach the desktop. I timed it again this month and even my slimmed-down XP Music partition was taking a massive 100 seconds to boot up. Something had obviously changed, and fortunately it didn't take me long to track down the culprit, since I'd noticed that the boot process seemed to 'hang' at a few points, suggesting that it was searching for something that wasn't there. After changing any of my hard, CD, or DVD drives, I always go into the BIOS and, for each drive position (Primary Master, Slave, and so on) with nothing connected, I change the Type from its default 'Auto' (Automatic detection) to ''Not Installed', so that the BIOS doesn't waste time looking for hardware that isn't plugged in. However, I've discovered that Windows XP now ignores the BIOS settings and searches again anyway, which meant that it was wasting time looking for four devices that didn't exist.

The answer was to go into Device Manager, expand the IDE ATA/ATAPI Controllers section, and then open in turn each entry named Primary or Secondary IDE Channel, go to their Advanced pages and, for each instance where the Current Transfer Mode box contained the words 'Not Applicable' (ie. nothing detected), change this Device Type from Auto Detection to None (see screenshot). It's such a simple procedure when you know how, and my boot-up time immediately dropped nearly 60 percent, to just 42 seconds!

The End Of The Dragster?

But have you noticed a change in emphasis from manufacturers? I reported in the January 2005 PC Notes that Intel had cancelled (or at least delayed) its proposed 4GHz Prescott processor due to overheating problems, in favour of dual-core designs where two or more processors of slower clock speeds are run side-by-side on the same chip — a tactic already adopted by AMD.

Meanwhile, nearly all the TV advertising I saw for computers in the run-up to Christmas 2004 was for products of the smaller/lighter/cheaper variety, rather than the traditional faster/more expensive sort. This is partly due to consumers switching from bulky desktop computers to far more convenient laptop machines — but in addition, even mainstream PC manufacturers are beginning to realise that consumers are getting bored and frustrated with the 'dragster' approach for home PCs, where speed is of the essence and no-one worries about all the extra noise. Instead they're beginning to concentrate more on making their machines run quieter and cooler. This has to be a good thing for musicians, although we were already way ahead of this trend.

Similarly, now that manufacturers are starting to put several processors on the same chip for home computers, and home networking is becoming more common (because many families have several computers in the house that all require Internet access), many PC musicians are once again ahead of the times, as they've already set up home networks to run more soft synths and plug-ins using distributed processing.

So as PC musicians we have a history of pushing the envelope — but does this incredible processing power at our fingertips, along with the comparative silence of our computers, make us content as musicians? In a huge number of cases, it seems not, but I suspect it depends on exactly when you entered the fray. Those — like myself and many other SOS readers and contributors — who started using home computers when MIDI was king, and when playing back a single stream of 8-bit/11kHz audio seemed amazing, have had time to adapt to each new increment of PC technology, marvel at each one in turn, work with and finally conquer them. On the other hand, those coming to the PC within the last few years generally seem to have much higher initial expectations but also face a much more daunting learning curve, with so many new technologies to master in one huge bite — plug-ins, soft synths, host applications, streaming, and so on.

We at SOS do our collective best to explain how to get the best out of all these new goodies, but it's perhaps hardly surprising that some musicians quickly become disillusioned when they aren't churning out memorable tracks within a few weeks of buying their new PC.

Small Can Be Good

What can you do if you're in the situation I've just described? Well, one approach that's always worked for me is to slim things down. Although you can produce great songs when running 48 tracks of audio with multiple plug-ins on each one, plus dozens of soft synths, some of the most memorable music of the past was created using eight tracks or fewer.

One of the few positive things about hardware synths being so expensive was that it took you so long to save up for one (or pay back the debt on your credit card) that you had the opportunity to learn it inside out before you could afford to buy another. Nowadays it's just too easy to buy something new every few weeks, or download loads of free plug-ins and soft synths in the expectation of being able to achieve more. Often, all this does is bog you down with yet more choices for every creative decision. However, it doesn't have to be this way. I've noticed, on the forums, a small but noticeable trend for musicians to discard all those plug-ins and soft synths that they haven't used for the last few months and really get to know those that they already use and enjoy.

So don't feel that you have to have the newest and fastest PC in order to make music. I know musicians with strings of successful albums who still rely on three-year-old PC laptops — and perhaps that's one reason why they were able to produce such successful work! And, strangely, those who are still running Windows 98 in many cases seem to be writing more music than those who rebuild their PCs every six months and install every update that Microsoft releases. I'm not knocking DIY or keeping up to date — it's just that it all takes time.

So when you next feel musically uninspired, don't necessarily reach for your credit card to buy something new for your PC. Instead, why not slim down your plug-in options, explore an unknown function of your existing sequencer, or adopt a radically different approach to kick-start your creativity?