The upper photo, from the recording session, shows Jérémy (left), Mathieu (centre) and Solal, and their respective mic placements. I’ve also captured a still from a YouTube video which was one of Jérémy’s mix references, showing the Coles ribbon mic on lead guitar, apparently paired with a small‑diaphragm capacitor mic.

We try to improve a gypsy jazz mix, and discover that even the best references need to be taken with a pinch of salt.

Using reference tracks is a good thing. It helps to stop over‑familiarity and ear fatigue leading you down wrong paths, especially if you’re new to recording and mixing. But referencing also has its pitfalls, as this month’s Mix Rescue illustrates.

Jérémy Dutheil is a fine accordion player who jointly leads an excellent gypsy jazz group with guitarist Solal Poux. His recording, made in a large living room, captured the group in trio mode with second guitarist Mathieu Chatelain. When the time came to mix, Jérémy had identified a couple of appropriate commercial tracks to use as references — but no matter what he did, his mixes refused to sound like them! Having posted several iterations of his own mix on the SOS Forum, he then sent the source tracks to me to see what a fresh pair of ears could contribute.

Live recording is normal in this genre, and it was a very refreshing change to work on a project containing only four mono audio tracks, none of them requiring any timing correction, tuning or other performance fixes. The accordion had been tracked using a pair of Prodipe STC‑3D large‑diaphragm capacitor mics, while each guitar had enjoyed the attentions of a Prodipe A1 pencil mic. Everything was in tune, nothing was clipping or noisy, and the playing was a treat.

However, it was also clear why Jérémy had had difficulty making these tracks sound like his references. One reason was that although the references were in the same genre, they featured different instrumentation and material. Low‑frequency content in Jérémy’s track was limited to whatever the accordion and guitars could generate, but both of his references had a double bass. And whereas both of his references were mid‑tempo affairs, the Charleston that was causing Jérémy problems was a fast dance tune played with more energy.

It also seemed likely that the reference tracks had been recorded differently. There was no room mic in Jérémy’s recording and his spot mics had been placed close to the instruments in a bid to achieve separation. This meant that the raw sound was dry, with the edgy quality you often get when affordable capacitor mics are positioned right up on a source; what natural reverb there was consisted of bright early reflections from the tiled floor. 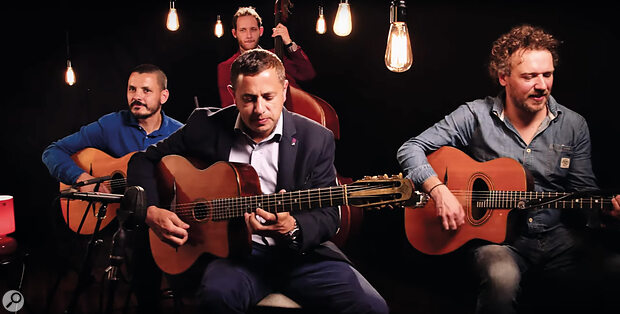 Jérémy’s reference for the guitar sound was a ‘live in the studio’ performance by the group Selmer #607.

By contrast, Jérémy’s reference for the guitar sound was a ‘live in the studio’ performance by the group Selmer #607. The YouTube video doesn’t reveal whether room mics were used, but a Coles 4038 ribbon mic is visible on the lead guitar, there are more soft furnishings in evidence, and possibly more distance between mics and instruments. As well as a more mellow and rounded tone, Jérémy’s...