Studio One 2's Mix view with the processing we describe in this article.

In the first of our regular Studio One workshops, we'll be widening our perspective with M/S processing.

Welcome to the first regular SOS workshop dedicated to PreSonus' Studio One. We'll be focusing on applications for, rather than the basics of, this new DAW, perhaps discussing a technique only possible in Studio One, or showing you how to undertake in Studio One a common technique that you often need in the course of recording. My hope is that you will go from reading the column to doing something new and interesting, or perhaps something fundamental but as yet undiscovered by you. This month, we look at manipulating stereo imaging for fun and (let's hope) profit.

More than a few of you are familiar with Mid/Sides (M/S) recording. I won't go into a full discussion of theory and practice, but a little background is important.

M/S recording is a coincident‑stereo mic technique that uses two microphones: one, usually but not always a cardioid, pointed directly at the source, and a second, bi‑directional (figure‑8) mic set as close as possible to the cardioid mic and rotated horizontally by 90 degrees relative to it, so that its null is pointing at the source. The outputs from the two mics are recorded onto two tracks and played out through a decoding matrix that provides conventional left and right channels. The width of the stereo image can be varied during mixing just by changing the balance between the middle and the sides microphones signals; in mono, the sides signal cancels out completely, leaving only the middle.

The decoding matrix is quite simple: if the two microphones have been recorded to two channels of a recorder, the matrix sums the two signals to get the left (M+S) channel, and subtracts the middle from the sides (M‑S) to obtain the right channel. In other words, both signals are fed to the left and right channels, but the sides signal is polarity‑reversed in the right channel. (A more refined M/S matrix will include a bit of scaling to offset level gains from summing channels, and possibly some channel‑swap options.) 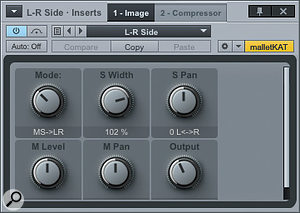 A couple of freeware M/S matrix plug-ins that run well in Studio One are MDA Image and SoundHack +matrix.

The most beautiful part of this scheme is that the same circuit that transforms the M/S recording into left and right channels can be used to convert an L/R signal, perhaps recorded with an X‑Y or spaced‑pair recording technique (or, in my usual case, something not even acoustically recorded, such as stereo synth output), into the M/S format, where it is ripe for mucking about with. Once it's sufficiently mucked, another pass through a matrix converts the M/S signal back to L/R for mixing.

Most DAWs stick an M/S matrix somewhere in their package of bundled plug‑ins, and there are free plug‑in M/S matrices, such as the Image plug‑in from the famous, free, and Open Source MDA plug‑in bundle, and Tom Erbe's SoundHack +matrix plug‑in, one of his numerous and wonderful free plug‑ins.

In Studio One 2, the M/S matrix is a feature of the Mixtool plug‑in, a collection of utility channel functions. We'll use this function at the end of our example signal chain below to get back to L/R, but first we want to encode an L/R signal to M/S format so that we can play with the stereo width. The matrix in Mixtool would do the conversion and deliver M and S signals if we inserted it on a stereo channel playing the L/R signal, but the signals would be paired in a stereo channel, making it difficult to access them separately, as we want to do for today's techniques. 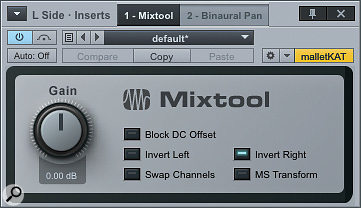 Studio One's Mixtool is a handy little plug-in that offers an M/S matrix, channel polarity inversion, and a few other useful utility functions.

As an example, we'll take a stereo drum overhead track and make it a little wider and fatter. We'll set up two aux channels to do our M/S encoding, then a third aux channel to decode back to L/R. First we'll create the signal path, then add the matrix processing.

Now let's muck around with what we've got! For a start, varying the balance between the Middle and Sides channels quite effectively adjusts the stereo width of the drum overheads. But there's more…

We can process the M and S signals independently — ooh! Here's a trick mastering engineers often use: try putting a compressor on the Sides channel and see how that sounds. With a very light touch (low ratio, maybe 1.2:1, and no more than about 2dB of gain reduction at any time), acoustic instruments or other delicate instrumentation can be made to sound somewhat fatter and more immersive (from the added emphasis on ambient and other uncorrelated sound), without the processing being obvious.

A somewhat heavier hand — say a 4:1 ratio and a maximum of perhaps 5dB of gain reduction — can wrap a pop mix right around the listener, with some audible but (if done right) pleasing artifacts. (Everything varies with the source material and specific settings, of course.) As with any other interesting technique, sometimes more is simply more and completely abusing your audio with massive amounts of really gnarly compression might produce a truly awesome effect. Experiment!

While compressing the Sides signal is my most frequently used M/S processing trick, there's no need to stop there. Compressing the middle signal produces an entirely different sound, and I got a freaky and amazing acoustic guitar sound by using two completely different‑sounding compressors with extreme settings on the M and S signals. It had this wobbly, breathing feeling that was over the top when heard alone, but in the context of a rock mix, it just gave the whole mix a feeling of aliveness.

With EQ, the first thought is to EQ the Sides signal, and this is a good thought, indeed, but I also discovered a great effect by EQ'ing the Middle signal so that it had a bit of a 'hole' in the mid‑range. This was particularly effective in combination with light Sides compression.

To animate a source within the stereo field, I once put the Sides signal through a flanger (once again, as it happens, on an acoustic guitar track). The image felt solid in the centre, yet undulated around the stereo field. Next time? Maybe a very different flange on the Middle signal as well…

M/S processing is not the only way to enhance stereo material in Studio One; check out the Binaural Pan plug‑in, for instance. There are also several excellent stereo image processor plug‑ins available for purchase, two notable examples being Waves' S1 and Izotope Ozone. Some reverbs offer image‑width control as well.

M/S processing is a great gateway into the world of stereo imaging, and worth some exploration. You'll find it a valuable addition to your bag of tricks, no matter what kind of work you are doing.