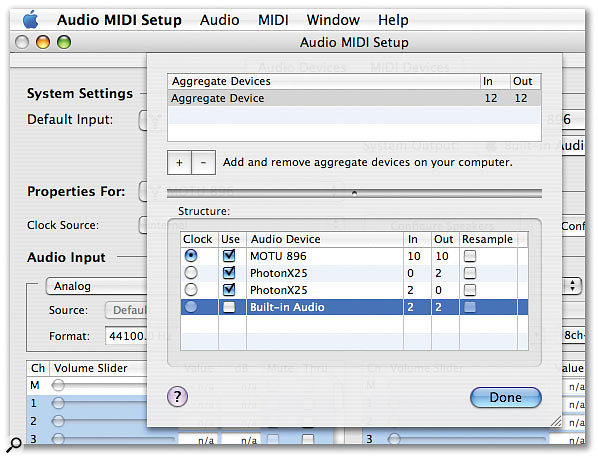 If you need to run multiple Firewire audio interfaces, you'll want to upgrade to the latest Tiger version of Logic.

Universal Audio have just released version 3.9 of the driver for their rather excellent UAD1 DSP card. "So what's that got to do with Logic?", I hear you cry. Well, the UAD1 frees up its onboard CPU when you Freeze tracks containing UAD1 plug-ins. I've not used Logic 's Freeze feature on my G5 at all yet, but now I'll start freezing again in earnest so I can get the most out of my UAD1. The other reason I've mentioned the new UAD1 driver is that it's now fully compatible with Tiger, so I can finally upgrade my studio system's Dual 1.8GHz G5. Incidentally, if you are running a UAD1 under Panther, Universal Audio still recommend that you upgrade the driver anyhow, as there are other performance enhancements. 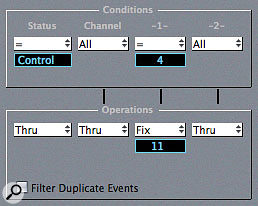 A lot of software these days makes use of MIDI controller data in an attempt to improve the realism of a performance. For example, the new Synful Strings library uses MIDI controllers to adjust vital aspects of volume and timbre. If you are using an expression pedal into a master keyboard, you can set up the keyboard to determine which MIDI controller is transmitted when you move the pedal, but if you're running several different plug-ins it can quickly become very inconvenient to keep switching controller numbers. However, you can use the Environment to make this easier to manage. On a new Layer, create two Monitor objects, an Instrument object, and a Transformer object. Cable the objects together as in the screenshot below and also set up the Transformer as shown — this converts my footpedal's MIDI CC4 output to CC11. Now Alt-click the little arrow on the second Monitor object to cable it to your plug-in. Finally, select the new Instrument object as the Track Instrument in the Arrange window and move the footpedal — the required MIDI controller will now be sent to the plug-in.

When saving Logic Songs as a Project I've noticed that if you set the Audio Files Not Used In The Arrange Page parameter to Leave it can cause a problem. Logic does in fact leave the files behind, but it doesn't always remove them from the Audio window. What this means in practice is that if you physically delete these files from the disk, Logic will ask you for them every time it boots the Song. You can delete these references by opening the Audio window and choosing Select Unused from the Edit menu. You'll see these 'orphan' audio-file references selected (just check that they are blank boxes and don't have waveforms displayed), allowing you to delete them.

I've been running Tiger on my laptop since its release, and I've now used it on a couple of major recording sessions. I'd been eagerly waiting for Mac OS 10.4 as I was keen to try its ability to use more than one Firewire interface in tandem for recording a whole band in one go. Using Logic v7.1, I'd already been recording 16 input tracks at once at 24-bit/44.1kHz with no problems at all using my MOTU 896 and a borrowed 828, so I was keen to upgrade my G5 to Tiger.

Unlike SOS Apple Notes columnist Mark Wherry, I always do a System Update rather than an 'archive and install'. I've never had any problems with this method and it's quick; I had the system up and running with Tiger in just under two hours, and that's including a Carbon Copy clone of the system disk to a spare Firewire drive (which also repairs permissions). After the basic Tiger install, I used System Update to check for any recent OS updates. Next it was the MOTU Firewire and some Tiger-ready plug-in patches, such as Synthogy's Ivory, Garritan's Personal Orchestra, and the UAD1.

After the final reboot, I launched Logic — and it crashed! It seemed to be falling over as soon as Core Audio attempted to load. After a cup of coffee and a bit of head scratching, I realised what the problem was: System Update hadn't picked up that the Apple Pro Application package hadn't been installed. A quick visit to Apple's web site (www.apple.com/support/downloads) solved the problem. How the hell did we manage before the Internet?

Apart from this 'minor' glitch, everything went swimmingly. Logic v7.1 seems to run in pretty much the same fashion as it did under Panther. So is it worth upgrading a music-only system to Tiger? Well, if you need to use more than one audio interface, it definitely is. I'm still to see the results of any other possible benefits though. It's often recommended that you don't upgrade during a 'mission critical' period. However, I'm continuously in such a situation myself, so if I listened to that advice I'd still be on Mac OS 7! These days, cloning your entire system drive onto a bootable backup should be enough to get you back to where you were before any upgrade if you have problems.