With new technology on the horizon, and the growing number of musician‑friendly applications appearing on the iPhone, 2009 promises to be another interesting year for Apple audiophiles.

Apple's focus last year was arguably mobile technology, with major announcements bringing significant changes to both the iPhone and MacBook product lines during the year, and the unveiling of the MacBook Air ultra‑portable notebook. So as we anticipate the next major version of Mac OS X in 2009, the cutely‑named Snow Leopard, we should also be anticipating revised desktop systems to take advantage of the latest technologies, such as DisplayPort (as discussed in last month's Apple Notes) for connecting Apple's next‑generation Cinema Display that incorporates a built‑in iSight camera, microphone and speakers.

The Mac Pro line hasn't changed since last January, and the iMac family certainly seems less impressive these days, with Windows‑based competitors such as HP offering similar products, but with built‑in Blu‑ray drives, television tuners and even 25‑inch multi‑touch displays. However, these features are perhaps not so important to the musician as they are to the consumer right now, and possibly a more important factor for those seeking better audio performance in an iMac is that Apple have yet to adopt Intel's latest Core i7 processor, featuring the new Nehalem micro‑architecture. Having said that, the chances are that by the time you read this, announcements at Macworld may have rendered this comment redundant...

Paddling Down The Nehalem

In last February's Apple Notes we discussed Penryn, Intel's then‑latest implementation of the Core micro‑architecture, which is at the heart of the Core 2 Duo processors found in iMacs, MacBooks and MacBook Pros. So it seems fitting that, one year on, we should be talking about the successor to this micro‑architecture, Nehalem, codenamed after a river in Oregon. (For those who like to know such things, the Nehalem is about 300 miles north of Rogue River, the river in which Stephen Fry went rafting in his recent series covering America.)

Nehalem will bring significant performance improvements to Intel processors, and early reports have indicated that a Nehalem core will perform approximately 15 to 20 percent faster than a Penryn core at the same clock speed. This would already be useful, of course, but Nehalem also sees the return of Intel's hyperthreading technology, previously used in later Pentium processors, making it possible for a Nehalem‑based processor to execute more threads simultaneously.

A thread basically allows an application to perform multiple operations at the same time, and normally there's a one‑to‑one relationship between threads and cores. So, in theory, an application that completes an operation using two threads can perform that task in half the time on a system with two cores, compared to a system with one core, since both threads could be running simultaneously. Therefore, the more threads a processor is capable of executing, the better an application should run if, like most audio software, it's designed to perform its processing across multiple cores at the same time.

Each hyperthreaded core appears to the operating system as two cores, so a four‑core Nehalem‑based processor like the Core i7 (Intel's successor to the Core 2) will actually appear to have eight cores. This means that the operating system needs to understand how to deal with hyperthreaded cores, and applications might also need to be tweaked in order to see the greatest benefit in performance.

When hyperthreading appeared in the Windows world in the days of the Pentium 4, audio applications that weren't optimised for this technology often saw a performance reduction when it was enabled, so it will be really interesting to see how Mac OS X deals with hyperthreading, should Apple decide to adopt Nehalem‑based processors in future Macs. For those running Cubase on Windows, Steinberg have stated that they are investigating the use of hyperthreading on the new i7 processor, but recommend that users disable this feature at the moment. It will be interesting to see how other music software companies deal with hyperthreading on the Mac, should it become an issue.

One Language To Rule Them All

An improvement in the performance of the main processor isn't the only way you might benefit from new Apple technology in the next year, though. A few months ago we were discussing OpenCL, a new technology to debut in Snow Leopard that will make it possible for general‑purpose computing tasks to be handled by the graphics hardware in your Mac. In theory, this technology would make it possible for audio processing tasks to be handled on the GPU, in addition to the CPU, providing more signal‑processing horsepower for complex productions. However, the potential for the technology is perhaps a bit more exciting than this simple example.

Although OpenCL originated from Apple, after working on a draft of the technology with AMD, Intel and Nvidia, Apple handed the work to the Khronos open standards group (who also handle OpenGL) earlier in the year, where a working party was established to gain industry support for a completed specification. OpenCL now has support from almost every major technology vendor, including ARM, Freescale and IBM, and Khronos released the version 1.0 specification last December as a royalty‑free standard.

To understand why OpenCL could be interesting for music and audio software, it's worth thinking about OpenGL for a moment. The GL in OpenGL stands for Graphics Language, and a graphics program written in OpenGL can be executed and exploited on different graphics hardware, so long as that hardware supports OpenGL. It also makes it possible for software‑only OpenGL implementations to run OpenGL programs, although these tend to be less efficient.

So wouldn't it be great if there was an equivalent in the audio world? Imagine being able to have a single plug‑in that could run no matter what hardware was available on your computer. The same plug‑in would run on your laptop, but would also become accelerated on systems with better GPUs (graphics processors) or DSPs. In essence, this is what the Open Computing Language (OpenCL) could make possible, because in addition to allowing general‑purpose code to run on graphics hardware, it turns out that the support will be far broader, allowing OpenCL code to be executed on a number of different processor architectures, including DSPs and the Cell processor, as used in Sony's Playstation 3.

How OpenCL will be adopted in the audio industry remains to be seen, though. Whether its performance will lend itself to real‑time audio applications is one factor to be considered, but a larger issue is the way in which audio companies often seem to operate like islands, only interested in the standards they create themselves. Will we see OpenCL support for the UAD2 card or TC Electronic's PowerCore hardware, even if it is technically feasible? Only time will tell...

An Ardour For Ardour 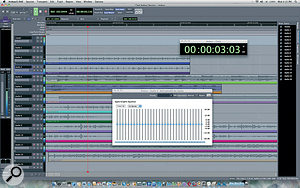 Ardour is a fully functional digital audio workstation that won't cost you a penny. Despite its Linux origins, current versions, like the SAE Edition pictured here, support Audio Units, so there's a wide choice of plug‑ins that will work with them.

It's been a while since we mentioned Ardour, the open source digital audio workstation, in Apple Notes. But it continues to evolve, both in terms of features and of supporters, and although the application started life on Linux, versions that run natively on Mac OS X (now without the need for the X11 window manager to be installed) have been available for some time. Thanks to the sponsorship of SAE, a simplified SAE Edition of Ardour was launched recently for Intel‑based Macs, and its primary goal was to make an audio application that, according to SAE, was "even more accessible to beginners.”

Although Ardour's user interface is a little quirky, it offers a tremendous level of functionality, providing features that are normally only found in more professionally oriented applications. But best of all, both the SAE and regular versions of Ardour are free. The SAE Edition can be downloaded from www.sae.edu/en‑gb/pages/80/Ardour_‑_SAE_Edition, while the standard version can be downloaded from www.ardour.org, where you can also learn more about the application and its community.

There are now over 10,000 Apps available on the App Store for iPhone and iPod Touch owners, and while not all of these are necessarily of interest to musicians, this month I came across two worthy of a mention: a potentially indispensable tool for laptop users, and a synth that combines some surprising functionality with an appealing user interface.

One of the biggest drawbacks when working with music software on a laptop is often the lack of a numeric keypad, and although it's possible to add an external keypad to your system, it can be a real pain to remember to bring or buy such a device. Instead, you could try out Balmuda Design's NumberKey, which turns your iPhone (or iPod Touch) into a wireless numeric keypad. 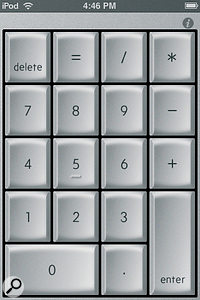 NumberKey turns your iPhone or iPod Touch into a wireless numeric keypad.In order to use NumberKey (pictured opposite), you'll need to download and run the NumberKey Connect utility (available at Balmuda Design's web site, www.balmuda.net) on your laptop. Unlike many iPhone apps that need a companion application to be running on your Mac, this one is amazingly slick. After you've connected NumberKey to NumberKey Connect the first time, you can set your device to be the default device, meaning that a connection will be automatically established every time you run NumberKey on your iPhone.

NumberKey's user interface is equally slick, and there's a choice of styles for the appearance of the virtual numeric keypad, making it possible to match most styles of Apple keyboard ‑‑ you can even mimic the look of a 'classic' Mac keyboard. The Configuration page offers a number of handy settings, such as a Delete key instead of Clear and a setting that tells the iPhone not to fall asleep while the app is running. There are also instructions for configuring a wireless network on your laptop, making it possible to establish a connection with your iPhone even when there's no other wireless network available.

NumberKey is a simple and handy idea that's been superbly executed, and at £1.19$1.99 I can't think of a reason why it shouldn't be on every Mac user's iPhone.

The second iPhone app that raised my eyebrows this month was Amidio's Noise.io Pro, which claims to be the first 'real' sound synth for iPhone and iPod Touch. It's not, perhaps, the best‑sounding synth you'll ever hear, but you can create some fairly complicated patches and perform them either via a two‑octave keyboard or a Control screen that functions similarly to how a Kaoss Pad works. 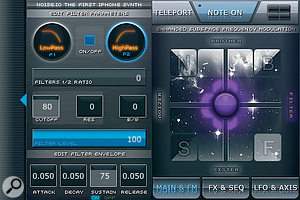 Noise.io Pro offers a number of different views for editing synth presets, including this filter view, where you can adjust parameters for the two filters. Note the ribbon strip to the left of the interface, which is where you can adjust the value for the currently selected parameter.The synth itself (left) offers three oscillators (including one dedicated to noise generation), two filters, and three effects (which are rather cool), and you even get an onboard sequencer for creating pitch, gating and modulation patterns within a preset. It takes a few moments to become familiar with the user interface, but there are some nice ideas in terms of editing parameters, such as using a ribbon strip to make adjustments to the currently selected parameter.

Noise.io Pro is priced in what's become the 'mid range' of music‑related apps, at £5.99$9.99, and it's really quite a bit of fun if you want a synth in your pocket.