New vistas appear for Reason users, with the arrival of Rack Extensions... 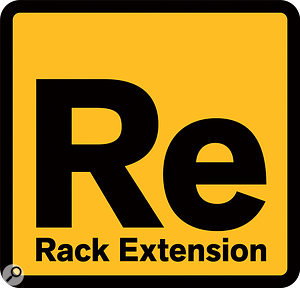 When I reviewed Reason 6, back in the November 2011 issue of SOS, I made no bones about both the strengths and weaknesses of the application's self‑sufficient, hermetic nature: "Having a prix fixe selection of devices keeps your focus very much on your production, and on using the tools available to best effect. It's often a relief to not have to choose from hundreds of third‑party plug‑ins, and have to deal with the specific quirks, compatibility and authorisation issues that can go with them.” But then, on the other hand, I also said "For all the advantages the approach offers, Reason 6 still feels under‑provisioned in some areas. Some varieties of effects are missing... There's a fairly limited choice of compression and EQ character, and no dedicated multi‑band compressor... As for really specific and sophisticated treatments, like drum replacement, noise reduction and restoration tools, forget it.'

Most of that will now go out of the window, though, as of Reason 6.5 (and Reason Essentials 1.5), which should be available in the very near future. That's because of the Rack Extensions, a new technology coming to these new versions, which is essentially a 'plug‑in' architecture for Reason. As inconceivable as it might once have sounded, you'll soon be able to spend your hard‑earned cash on brand new devices from third‑party developers to put in your Reason rack.

If you haven't seen it already, the video at www.propellerheads.se/news/rackextensions is well worth watching. But if you've not got time for that, here are the key facts:

That's not the end of the news from Propellerhead, as an instrument called Radical Piano was announced at the recent Frankfurt Musikmesse. It appears to be either a modelled piano or a sampled/modelled hybrid, with continuous variation between dark and bright timbres and many parameters on offer, including sympathetic vibration. An audio input allows external sources to take advantage of its soundboard colouration and sympathetic resonance, like a specialised kind of reverb. As it was featured in a mock‑up screenshot of the new Propellerhead Rack Extension store, the early indications are that this will also be a paid add‑on, rather than bundled in version 6.5.

After the fact comes speculation. There's every reason to believe that the companies whose plug‑ins were featured in Propellerheads' demo might well end up offering their entire plug‑in ranges as Rack Extensions. For example, U‑he's Uhbik is actually a pre‑existing bundle (for conventional VST/AU/RTAS hosts), of which Uhbik‑A and Uhbik‑F are just two components. The other processors in the bundle include a delay/echo, granular pitch-shifter, phaser, EQ, overdrive filter, frequency shifter and tremolo. Any of those would bring something new and useful to the Reason table — and I doubt I'm alone in relishing the prospect of GForce's superb virtual instruments coming to Reason platform. To have some faithful recreations of real analogue synths available at last... what a concept!

Propellerheads' CEO, Ernst Nathorst‑Böös, also stated, in his Musikmesse press conference, that there were other developers on board who didn't yet want to be named. The mind boggles… I imagine it would only take the involvement of one or two more major players — the likes of Audioease, PSP, iZotope, Native Instruments or Spectrasonics —to completely alter long‑standing perceptions of Reason's value as a production platform. As soon as musicians and producers can 'jump ship' to Reason without having to give up all their favourite tools, it starts to look like a really serious DAW. Add in the simple installation and authorisation procedures, the harmonised patch management features, plus Reason's excellent stability, and the prospect is especially enticing.

It's probably also worth reflecting on the Rack Extension format's value from a developer's point of view. It seems that Propellerheads' SDK (Software Development Kit) for the format relieves developers of most of the headaches associated with copy protection, as well as Mac/Windows cross‑platform compatibility concerns, leaving them to concentrate on the really interesting stuff: the DSP code and nature of the instrument or effect itself. It's conceivable that Rack Extensions could end up a very attractive option for smaller developers, and I've no doubt we'll begin to see things starting to appear that are only available for Reason. Exciting times.

Several developers were willing to share screenshots of their early version Rack Extensions with SOS, and provide a bit more information, so we'll wrap up this month's column with a quick run-down of who's onboard. For interest, I've listed here the current cost of each developer's conventional plug‑in equivalents, as much as anything else to illustrate the fact that there's bound to be quite a range of prices for Rack Extensions. But, in fact, the one clue to emerge so far about pricing, from developer U‑he, suggests that they could end up undercutting their AU/VST/RTAS counterparts quite significantly.

U‑he's Uhbik‑A is shown here in a development version lacking patch controls and a bypass button, and with some visual tweaks still to be done on the knobs and labelling, but already it's looking quite a bit more inviting and immediate than RV7000. Interestingly, company founder Urs Heckmann told me that working with the new platform 'has been an easy gig so far'. He has also stated that existing owners of plug‑in versions of his products will be offered an crossgrade path to the Rack Extensions, and that individual processors from the Uhbik bundle could cost as little as €10‑13 each. Current cost of AU/VST/RTAS Uhbik bundle (nine plug‑ins): $149. www.u‑he.com

The Softube Trident A‑Range equaliser is a model of the EQ section from a specific Trident A‑Range mixing desk in Denmark. It's a four‑band design, with shelving top and bottom bands, low and high mids and low‑ and high‑pass filters. Softube also modelled the saturation/distortion character of the original, and on the Rack Extension the effect gets its own knob and is continuously variable. Softube say they plan to release more products from its range as Rack Extensions at the same time as the Trident A‑Range. Current cost of AU/VST/AAX/RTAS plug‑in version of Trident A‑Range: $219. www.softube.com

SonicCharge's Bitspeek is described by them as a 'real‑time pitch‑excited linear prediction codec effect'. OK, so that's a bit tongue‑in‑cheek, but still — wow! Imagine a cross between a Speak & Spell, a bit‑depth reduction effect and a granular synthesizer, and you're more or less there. As well as many funky vocal effects, Bitspeek can generate pitched tones and textures from almost any audio input. Its presence in Reason is going to increase massively the potential for off-the-wall sounds, and it seems the Rack Extension version will have unique features compared to the existing plug‑in versions of the effect. They include CV out connections that will, in the words of Magnus Lidström, Bitspeek's developer, "make any synth in Reason speak and sing”. If you're thinking that name rings a bell, you'd be right — Magnus was the designer of Reason's excellent Malström synth, introduced way back in Reason 2.0. Current cost of AU/VST plug‑in version of Bitspeek: $29.  www.soniccharge.com