Love it or hate it, 'hard' pitch correction is still a much used technique — and it's simple with Sonar's V-Vocal.

Using pitch correction to provide 'hard' correction to vocals has become a staple of hip-hop, rap and dance music. Whether or not you're a fan of this technique, it's easy to do using Sonar's V-Vocal processor, which incorporates Roland's VariPhrase technology.

You need a vocal to start, so here's the first tip: don't hit the pitch too precisely. It's hard to unlearn singing on pitch, but for pitch correction to add the required effect, it needs slightly 'off' pitches to correct. If the pitch is already spot on, V-Vocal will leave the vocal more or less alone, which won't add that sort of warbling, nasal effect. One option is simply to change pitch somewhat on held notes.

For most applications, you need to know the song key and mode, so enter the appropriate info into V-Vocal, then do the correction. Here's how:

Note that you needn't restrict the pitches to a major or minor scale. Click on the keys to create a custom scale; selected notes turn light blue. You could even just click on one key to quantise the vocal to a single pitch, or with an E-major scale, change the Eb to D for a blues scale vibe with a flat 7th.

While this provides the basic pitch-correction effect, V-Vocal can take this process a lot further. However, there's one caution: if you want to undo any changes you create with V-Vocal, don't use the Undo option from Sonar's Edit menu, as this will undo the creation of the entire V-Vocal clip. Instead, use V-Vocal's undo/redo functions located in the toolbar at the top of the V-Vocal window (to the immediate left of the Roland logo), or use the Ctrl-Z keyboard shortcut. V-Vocal's multi-level undo can take you back through multiple edits.

Changing the formant can create unusual vocal effects. To produce a static formant change, turn the Shift control clockwise for a more 'Munchkin'-type timbre, or counter-clockwise for the "I wish I could sound a bit like James Earl Jones” effect.

The Formant section's Pitch Follow control determines whether the formant tries to track pitch. Turn it fully counter-clockwise, and the Shift control alone determines the formant. When it's turned clockwise, the formant-shifting effect is more subtle, as it correlates to pitch.

You can also automate formant changes. Click on the F (formant) button, and a red line appears across the waveform window. This provides your basic 'rubber-band' automation, with four main edit options:

You can combine these four methods to create complex automation curves. To erase any nodes, choose the Eraser tool and drag over the node(s) you want to nuke. A similar option is available for changing levels within the V-Vocal clip. Click on the D (Dynamics) button and a curve appears that you can modify the same way as the formant curve to affect levels. 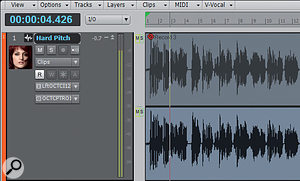 Track layers have been turned on, so you can see the original, muted clip on top, and the former (now bounced) V-Vocal clip underneath.

Specify the same key and scale settings as used previously, but set Note and Sense to 80 instead of 100. Click anywhere within the note grid, type Ctrl-A to select all notes, then click on the Correct button.

Now play back the track so you hear both 'V-Vocalised' clips, which should produce a pretty cool doubling effect. Experiment with different Note and Sense settings, such as 70 for both, which will produce an even more differentiated sound. Once you have a doubled vocal you like, use Bounce to Clip to convert the V-Vocal clip into a standard clip. Remember, you still have the original version if you want to experiment further.

However, as the two clips are layered within a single track, you can't treat them as separate objects. Insert a new audio track, and drag the second V-Vocal clip to the new track. Now you can pan them oppositely, add delay or reverb, or whatever takes your fancy.

Granted, vibrato isn't normally added to hard pitch-corrected vocals. But why be normal? Here's your chance to try something different. And this works particularly well with the doubling technique, as adding vibrato to sustained notes provides more variety between the doubled versions.

To add vibrato to a sustained note, look for a straight line between two green note nodes. Select the vibrato tool (its icon looks like a sine wave), and hover just above or below the straight pitch line until the cursor turns into a pencil with a small waveform at the tip. Click and drag across the note's line to superimpose the vibrato waveform on the pitch line. 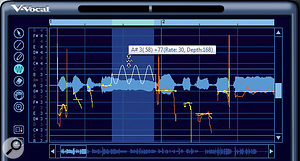 After adding vibrato, you can increase or decrease the vibrato amplitude.

To change the vibrato amplitude, hover over the vibrato waveform until the cursor turns into a double up/down arrow. Click and drag up to increase the amplitude, or down to decrease. 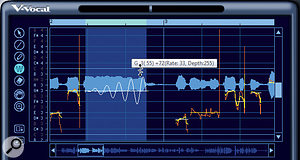 You can fade in vibrato over a note's duration.

There's one final vibrato option: fading in vibrato so it increases over time. Hover the cursor just above or below a note's leftmost node, and the cursor turns into an image of a double up/down cursor with a crescendo. Click, then drag upward at an angle to fade in the vibrato.