For anyone dismayed by the spec of the new Mac Pro, there's now a dedicated range of Pro Tools PCs. 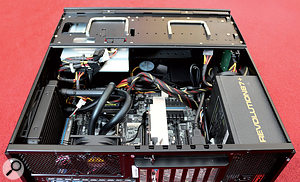 The Pro Tools PC might not look like a space-age dustbin, but it's rackmountable and it has PCI slots...

The Pro Tools world can feel quite Mac-centric at times, even though Windows support has been in place since before the Digi 001 was released. However, the long wait for a new range of Mac Pro computers, and the lack of PCI expansion on the machines that have eventually been announced, mean that quite a few long-term Mac users are thinking of jumping ship.

On the Mac platform, compatibility issues and approved machines are very easy to manage. Apple usually have only a couple of versions of each model out at any one time, and the components are very tightly managed, so there is only a small number of possible configurations that Avid need to test and approve. For Windows PCs, however, the situation is very different, as there are limitless possible combinations and permutations of motherboards, video cards, chip sets and so on. Avid do approve a small number of specific Windows PCs, but these tend to be expensive and powerful machines that have also been qualified for Avid video editing systems; although they would be at home in a machine-room setting, they are usually too noisy to use in a studio environment.

Enter Pro Tools PC, the brainchild of two former Carillon employees. Neil Hester and Robin Vincent, who now runs Rain Computers UK, decided there would be a market for a pre-configured Windows machine that would work with Pro Tools out of the box.

The process of ordering a Pro Tools PC is not so different from that of ordering from the Apple Store, with a range of options to choose from, including which version of Windows you want, how much RAM, and so on. As befits a smaller company, however, there is a strong personalised element to the process. The team will contact customers to check that everything is as they want, discuss migrating from any system they already own, and check what version of Pro Tools they would like pre-installed on their machines.

In its default configuration, the Pro Tools PC comes with a PCI graphics card which occupies one slot and obscures its neighbour. If you need more slots, this could be removed or substituted.

When the box arrived, it was a little bigger than I expected, but when I opened the lid, it became clear why. The PC ships as 'a box within a box'; the outer box is also double thickness, and the inner box sits snugly protected in foam.

Much thought has been applied to keeping the Pro Tools PC quiet. The rackmount case is designed to have 'positive pressure' internally, to reduce dust build-up inside, while large fans are fitted that spin slowly — a much quieter arrangement than having small fans spinning quickly. A water-cooling system helps to keep the running temperature of the CPU right down without adding to noise levels. As for hard drives, there are two 2.5-inch slots above the DVD writer, one containing the SSD boot drive, plus a cradle with shockmounts for up to three 3.5-inch drives. Additionally, you could add up to a further six 3.5-inch drives outside that cradle, but installing long cards like the Avid HD TDM or HDX cards will mean less space for additional drives.

The motherboard chosen for the Pro Tools PC provides seven PCI slots, allowing a very powerful HDX system to be installed without the need to add an external chassis. However, not all the slots are available for Pro Tools cards. Slot 2 is a PCIe x16 card which has the graphics card fitted, and the graphics card's heat sink obscures the 1x PCIe slot 3, so this could only be used by removing the graphics card and installing a smaller one or using the built-in graphics. Slot 5 is a PCIe x8 slot, which can take an HDX card; it is this slot that Pro Tools PC recommend for an HDX1 system. Slot 7, nearest the power supply, is a PCIe x4 slot, which is the minimum that can be used for an Avid HDX card. Slot 4 is a PCIe x1 slot, which could be used for an older HD rig, while slot 6 is a legacy PCI slot which could run an HD PCI core card or fit the host card for a PCI-X expansion chassis to run an old PCI-X HD system from this. This has been tested with a Magma P7R4, which is the HD TDM Avid-qualified chassis.

There are, in other words, plenty of options, and the Pro Tools PC can support old legacy systems as well as the latest HD Native and HDX systems. What's more, all of these configurations have been tested. 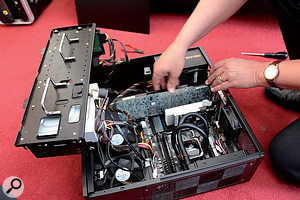 Installing an HDX card into the Pro Tools PC is simple.

For my own tests, I transferred my HDX system from my Mac Pro. Note that HDX cards come with two power adaptor leads, and you need to use the PC one, which has a standard four-pin hard-drive power connection. To fit my HDX card, I just needed to remove some screws and lift out the drive cradle, remove the blanking panel on the relevant PCI slot and put the card in; all the looms in the case are arranged so that you can lift out the cradle without unplugging anything. I installed the Pro Tools PC in my computer cupboard, plugged it up to all my drives and peripherals, and hit the Start button. Up came the Pro Tools PC logo on my screens, and once the boot cycle had finished, I could see that the correct version of Pro Tools had already been installed, and a useful Pro Tools PC Welcome Guide popped up. The only thing I needed to do to get started was install a piece of software such as Mac Drive that would enable the Pro Tools PC to see my Mac-formatted HFS+ drives.

I was able to open up all my Pro Tools sessions once I had installed the necessary third-party plug-ins, and, in short, everything just worked! I found that I could work on a wide range of post-production and music-related projects with no trouble at all. As a long-term Mac user, the only thing I found difficult to get used to was that keyboard shortcuts use different modifier keys on the Windows version — for example, for splitting a region on a Mac, I would use Command-E, but the Windows version uses Ctrl-E. For many of us, the Mac shortcuts are in muscle memory, so this takes some getting used to, but this is hardly the fault of Pro Tools PC, and when I asked Neil about this, he told me that they are considering some kind of mapping solution for Mac folk like me.

As I was unable to break the Pro Tools PC with any of my real-world projects, I put together a very demanding stress test. I created a 64-track session at a 96kHz sample rate using 32-bit audio files, then inserted a D-Verb DSP plug-in on every track, which filled up nearly all the DSP on the HDX card. Next, I added an instance of the native D-Verb plug-in to every track, to take the CPU Activity up to 45 percent. Using the factory-fitted eSATA 6GB/s 3.5-inch audio drive, I ran this session with the hardware buffer size set to 1024 samples and the disk cache disabled. I found that I could still get reliable results at 256 samples, and even at 128 samples — the lowest setting possible for an HDX system — it worked most of the time with the disk cache still disabled.

Make It Easy On Yourself

There's no doubt that the Pro Tools PC team have worked hard to create a machine that runs Pro Tools straight out of the box. The fact that they will pre-install the correct version of Pro Tools, and do the setting up and optimisation so you don't have to worry about it, is a great selling point. They have manufacturing facilities in the UK and the US, so our American friends don't have to import it from the UK.

There's plenty of advice out there about buying and building PCs, and you can certainly get a cheaper computer that will run Pro Tools if you're prepared to do a lot of legwork. However, for users and companies who need a machine that's ready to go out of the box and backed up by knowledgeable support, the Pro Tools PC fits the bill very well.