In theory, old Pro Tools sessions should open in version 12. In practice, you may need to know a few tricks!

Today, I needed to open a Pro Tools session I had recorded and mixed back in 2006. At that time, Pro Tools sessions were PTF files, and I would have been using Pro Tools 7.3. Fast forward 11 years, and what would happen when I opened this old session? In this article I am going to walk you through exactly what did happen, and cover the issues that can crop up when you try to get access to older Pro Tools sessions.

Every so often, when Avid release a major new version of Pro Tools, they drop support for the oldest session and audio file formats that the previous version could open. So, although Pro Tools 12 will open sessions from v5.1 upwards, there are some caveats to bear in mind. The main one is to do with the audio file format.

Pro Tools 12 can only open sessions where the audio files are in WAV or AIFF formats. If the audio files are Sound Designer II (SD2) format, you will need to find a system with Pro Tools 10 or earlier installed. The same applies to session files from versions of Pro Tools earlier than v5.1. Note that the older your Pro Tools sessions, the more likely it is that the audio file format used will be Sound Designer II, as that was the default audio file format for Pro Tools in the early years. Pro Tools 10 was the last version that could open a session with SD2 files and automatically convert them to WAV (BWF) files; once this is done, you should be able to open the converted session happily in Pro Tools 12. 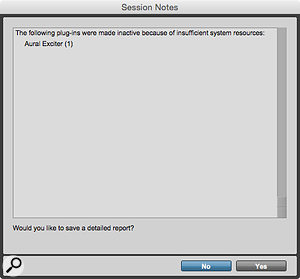 When a plug-in fails to load because you don’t have a valid licence in your iLok, you’ll get this rather misleading message!But back to my session created with Pro Tools 7.3. I used to keep a selection of drives on the shelf, but if these aren’t used for a while they don’t always spin up when you plug them back in, as the bearings can go sticky. So, a while back I invested in a dedicated 8TB drive, and copied everything off all my backup drives and older DVD backups in order to have one consolidated backup disk, a Seagate archive drive in an external chassis connected by eSATA to my Mac Pro. All my backups are now ‘online’, and I can access them without having to hunt through drives and disks looking for the right session.

So, initially, I just double-clicked on the session file on my backup drive to open up my 11-year-old session. All went well — until I got an iLok Activation message advising me that a valid licence wasn’t available for a plug-in used in the session. At this point you have two choices: Activate or Quit. The former offers you the chance to log into your iLok account and buy a licence, while Quit bypasses the authorisation procedure for that licence, loading up the session with that plug-in deactivated. Once the session is loaded, the missing licence triggers the Session Notes window, with the slightly obscure message saying that “the following plug-ins were made inactive because of insufficient system resources”.

Going Back In Time

Once I’d Quit the iLok Activation window, my session was soon open just as I left it 11 years ago. The audio files were all in WAV format, and Pro Tools had been able to find them all without any intervention. However, before I could get to work on it, there were some things that needed attention.

First of all, there was that missing plug-in — in this case an Aphex Aural Exciter on the ‘Keys’ track. By logging into your Avid Master Account it is now possible to rent or buy missing plug-ins from the Marketplace menu inside Pro Tools, pay for them and install them, all without having to either close the session or quit Pro Tools. Some plug-ins are available as perpetual licences, while others are also offered for a month’s or a year’s rental. However, not all plug-in developers choose to make their plug-ins available in the Avid Marketplace, and so it proved with my missing Aural Exciter, so it was clear that I would need to find an alternative. This problem can also arise with older sessions using TDM or RTAS plug-ins that never got updated to the current AAX Native or DSP formats. 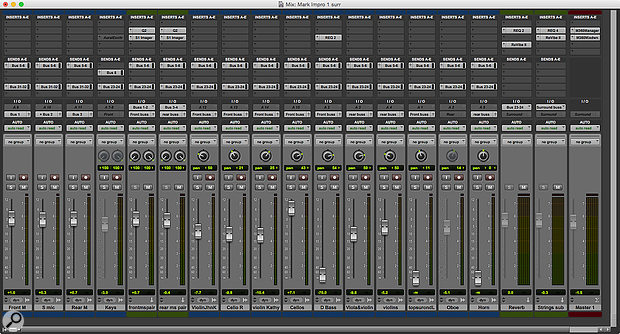 The Mix window from my 11-year-old session. Note that some tracks are greyed out.

A trip to the Mix window, meanwhile, reveals several tracks where the faders, pan controls and output routing are greyed out. This is because my current I/O Setup is different to the I/O Setup I had 11 years ago, and some of the paths don’t line up — including, in this case, the surround tracks on the right-hand side of the Mix window. With Pro Tools 11 and earlier this could be a real pain, because reallocating outputs could leave you losing automation and so on. With the revised I/O Setup window introduced in Pro Tools 12, however, it is relatively easy; because Avid separated the session audio routing from the hardware audio routing, now it’s a simple matter of reallocating the hardware routing.

In the new Pro Tools 12 I/O Setup window, it’s a simple matter to reassign the session’s Surround path to an active 5.1 hardware output.

To do this, go into the I/O option in the Setup menu, and then, rather than selecting the Output tab, select the Bus tab. In the Mapping to Output column, which is new in Pro Tools 12, you can see that there are a number of outputs that are no longer mapped from the session’s I/O settings. The key one is the Surround path, which is not what I have now on my current system. If I click on the italicised legend “Surround - path n/a”, Pro Tools displays the available paths on my current setup. Selecting the 5.1 Monitor option, I now have a valid output path, and if I click OK and close the I/O Setup window, all the tracks that were previously greyed out will now be OK. Assuming I managed to find a substitute for the Aural Exciter plug-in, I can now play the session exactly as I left it. 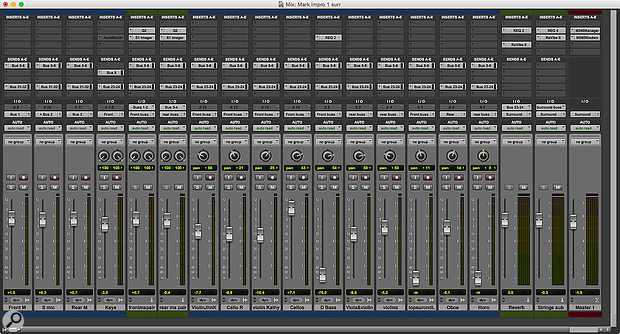 All the tracks feeding the surround output are now active once more.

All in all, it was relatively easy for me to open a decade-old session and to be able to pick up where I had left it 11 years and five Pro Tools versions ago. In these days of computer obsolescence, that’s pretty impressive by any measure.

One thing we all dread on opening old sessions is the Missing Files window. Where this does pop up, I tend to use the Skip All option; then, once the session is open, I go into the Clip List and choose Show Full Path. This will enable me to see where Pro Tools expects to find the missing files, which will be in italics in the Clip List, and may give me a clue where to look — or, if the session has come from someone else’s system, point them in the right direction to find the missing files.