In this month’s Logic technique column we look at the version 10.3.2 update and explore the new Percussionists and workflow improvements that have been added to the DAW’s Drummer tracks. We will then explore the new Apple Loops content that complements the expanded Drummer library. 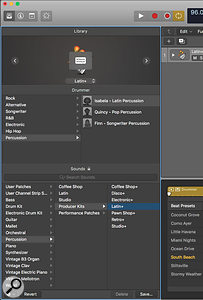 Screen 1: The Logic 10.3.2 update adds Percussionists to the Drummer library and has many workflow improvements. You can now browse for a Drummer in the top section of the Library, while the bottom section displays the sound preset.In a new Logic project add a Drummer track. Open the Library area and expand it horizontally so that you can easily see the preset hierarchy. In the new update Apple have redesigned the Library area so that the top half of the Library is dedicated to choosing the genre and the drummer/percussionist, whilst the bottom half is used to select the drum/percussion kit that your virtual drummer will play (see Screen 1).

Begin by choosing the Percussion genre and then from that category choose the virtual percussionist ‘Isabela’. Logic will automatically choose the appropriate percussion preset to accompany the drummer, in this case the Latin Kit. Hit play to listen to the default pattern that loads with the drummer. Now, go to the bottom section of the Library and experiment by switching through the different percussion patches. You will see ‘Coffee Shop’, ‘Latin’ and ‘Studio’ presets, each bringing a different flavour. These kits are simple EXS24 patches, however there are also more capable Drum Machine Designer versions of the same kits that have many more features and greater tweakability. Go to the Producer Kits directory and choose one of the same kits with a ‘+’ after the name, for example ‘Latin+’ kit. This will give you considerably more control over the sound later on.

Double-click on the Drummer region to open the Drummer Editor window. The Drum Machine Designer editor looks slightly different from the Drum Kit Designer interface that you will be used to from the normal drum kits, but the principle is the same. Here we can change the arrangement and complexity of what is being played. Go to the left of the Drummer Editor to the ‘Beat Presets’ area and change the preset. Different presets act like scene memories for the settings in the Drummer Editor and allow you to jump between different arrangement/pattern settings quickly and easily. With the Drummer pattern playing, use the X-Y pad to adjust the complexity and loudness of the current pattern to taste. Use the instrument icons to mute and unmute the different percussion elements.

Even if the type of arrangement you are likely to create only requires minimal percussion, having the ability to quickly try different elements is really useful. To change the pattern that a percussion group is playing, go to the variation sliders next to the instrument icons. For more advanced tweaking options click on the Details button. The Complexity Range sliders in this menu define the lower and upper limits for how each instrument will react to the X-Y pad. Setting the sliders fully apart will give the greatest amount of variation when adjusting the X-Y pad. Within the Detail section the Humanize and Phrase Variation controls allow you to introduce more variations into the pattern that’s being played. The Humanize knob will introduce small timing offsets to make the pattern less consistent or robotic, whereas the Phrase Variation knob will introduce subtle changes to the pattern itself. Once you have configured the Drummer Editor to your liking, you can capture the settings as a preset by going to the Beat Presets drop-down and choosing Save Preset. 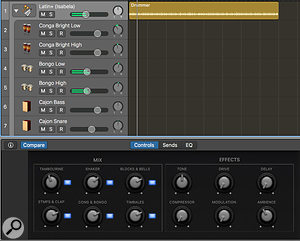 From the Controls tab, use the Mix section to quickly balance the different elements of the percussion section. Use the Effects section to alter the overall sound of the percussion ensemble. I found I could easily get a wide range of useful percussion timbres from just tweaking the Tone, Drive and Ambience controls. The Sends section allows you to quickly apply either Reverb or Delay to an individual percussion element and the EQ tab recreates the Channel EQ plug-in. However, there is considerably more tweaking that can be done. Go to the Latin+ track and click the disclosure arrow in the track header to show all of the sub-tracks. You can think of a Drum Machine Designer kit as a special type of folder track that contains many other instrument tracks all packaged together. In this case each percussion sound is an instance of the EXS24 sampler. With the Smart Controls panel showing, click on the Conga track. Now the Smart Control panel gives you quick access to editing parameters such as pitch, compression and tone for the conga part (see Screen 3, below). Another way to access the same controls is to go to the ‘Latin+’ channel strip and double-click on the Drum Machine Designer instrument UI. Next, click on the Conga Bright Low cell and the Smart Controls area will update to show the controls for the selected element.

Screen 3: The ‘+’ version of a percussion preset has a dedicated channel strip for each percussion element. Each element also has its own set of Smart Controls for tweaking the key parameters of the instrument.

Another way to work with Drummer tracks is to use the new Apple Loops content. Open the Loops Browser, go to the top of the UI and, from the Loop Pack drop-down menu, choose Drummer. You should see a filtered list organised by each drummer’s name. Note that new Drummer loops have their own yellow icon that looks like a small version of a Drummer region. Scroll down to the letter ‘I’ and you should see Apple Loops by the percussionist Isabela. These will contain similar patterns to the ones we were looking at in the Drummer Editor window. Click through the different percussion loops to audition them.

The Loop Browser is arguably a more flexible place to begin putting together percussion loops than the Drummer Editor because you can audition loops created by multiple Drummers all within the same area. Try assembling a quick percussion arrangement by dragging different Drummer loops onto the arrange page. You can add your own Drummer loops to the Apple Loops library so that you can use them later on in any project. Return to Isabela and tweak the Drummer Editor until you have a loop you want to reuse. To save the loop, simply drag the Drummer region into the Loops Browser and, from the ‘Add Region to Apple Loops Library’ pop-up, name your Loop and choose ‘Create’. The Loop will now be in your ‘My Loops’ section and will have a yellow Drummer icon.

There are other advantages to using the ‘Latin+’ preset over the regular Latin kit. As previously mentioned, each element of the kit has its own channel strip which means we can also add MIDI effects to each element. On the Conga Bright Low part add the Randomiser MIDI effect to the channel strip and try loading the Velocity Humanizer preset. This adds extra randomisation to the conga part.

Another way to randomise your percussion parts is to convert the Drummer region into a MIDI region, enabling you to achieve much more experimental results. Ctrl-click on the Drummer region and choose ‘Convert to MIDI Region’. Double-click on the region to bring up the Piano Roll editor and then select all of the notes. Now open the Piano Roll editor and go to the Functions / MIDI Transform / Random Velocity. From the pop-up window, choose the Operate command to apply randomisation to the velocity of the percussion pattern. You can keep pressing Operate Only until you generate a velocity pattern that you like. Converting Drummer regions to MIDI is also a great way to apply more detailed editing to your percussion parts.

Good percussion parts are a real challenge to play and record as they require a decent-sounding room with complementary acoustics in order to sound pleasing. The percussionists included in this update, therefore, fill a really useful niche and make a great addition to Logic Pro X. I can only hope Apple build on this further to include more percussionists and instruments from around the world.