Patterns & Impact XT In Studio One 4 Skip to main content

Patterns & Impact XT In Studio One 4 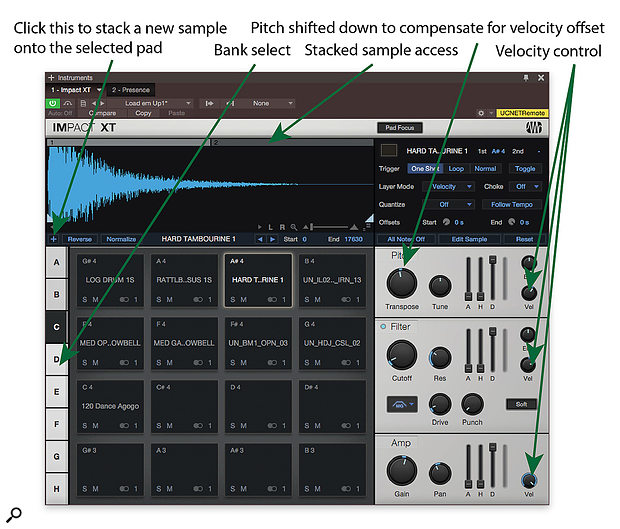 New features in Studio One 4 make it even easier to add interest to sequenced patterns.

Studio One 4 is here, and there is plenty to explore. This month, I take a brief look at the fun to be had combining two new additions. Patterns is a step sequencer, more or less in the style of old hardware drum-machine sequencing, and Impact XT is an improved version of the existing Impact drum instrument. In this workshop we’ll only cover a narrow subset of what these features can do — for instance, I won’t even mention the melodic mode for patterns — but that should be enough to convey how far you can go with them.

Some audio examples making use of probability, as well as the other techniques described here, can be found by viewing the online version of this article.

I get bored of things that repeat in exactly the same way every time, so this column will look at how Patterns and Impact XT can create entire rhythmic worlds quickly and without too much effort. I’ll explain some of the techniques I use with these tools to go from a simple step sequence to a surging, changing world of rhythm.

First, load up on sounds. Impact XT has eight banks of 16 pads, each of which can stack up to four samples. This is a lot of sounds that can be stored and played, especially given that the samples don’t have to be only short drum sounds — they can be loops or long sounds. Load a kit you like, and then drag and drop sounds from the Finder or Windows Explorer onto pads in other banks to build a big, fat sound set. In Impact XT, to stack a sample onto a pad’s existing samples, you no longer Shift-drag the sample to the pad: instead, click the plus-sign button below the lower-left corner of the waveform display. You can still drop up to four samples onto a pad at once to stack them. (See Screen 1.) Once you’ve put the work into creating a kit, save it for posterity.

Second, create some Patterns. Studio One 4’s Patterns takes a basic grid approach to sequencing, but throws in some fun twists. The first is variations. As the name indicates, variations can be modified versions of an original sequence, but a variation also can be an entirely different pattern.

Insert a new pattern by locating to the track and time where you want it and pressing Shift+Ctrl+P. On the left of the familiar drum machine-style grid is a sample list; this might get a tad long if you load lots of samples, but it helpfully shows the sample names. Sequences currently can only be programmed by mouse-click or using step record, but hopefully, programming from a MIDI pad controller control will be added soon. Make a pattern you like, and you are at the starting line. Time to make some variations!

The buttons at the top of the list duplicate or add a new variation. I use them roughly equally. Duplicate a pattern and move some notes into an interesting new version of the sounds and rhythms in the original. Once you’ve created several variations, loop a single iteration of the pattern in the track, hit the space bar to play, and click different variations (in their left columns) to play them. Jam out.

Variations don’t have to have the same number of steps as each other, or the original pattern. I kept things relatively simple in Screen 2, setting one variation to 12 steps, while all the rest had 16, but this was still sufficient to introduce a clear polyrhythm. Even with only variations double and half the original length, you can get some stuff happening. 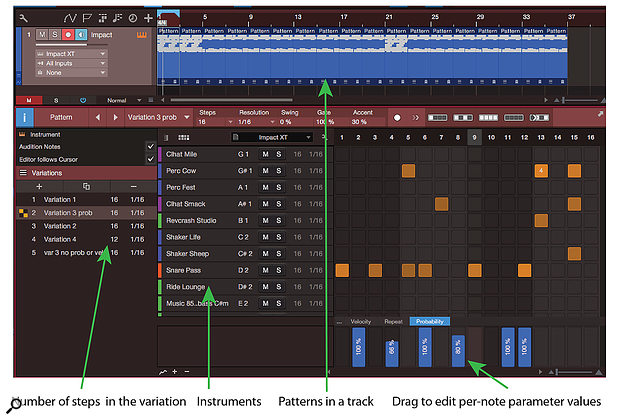 Screen 2: The Pattern editor. The buttons immediately below the ‘Variations’ legend create new or duplicate variations.

Patterns can be inserted on any instrument track, and each copy of the pattern in a track can be set to play a different variation. You can stack patterns on a track and they will play merged, making it a snap to build polyrhythms or create transition overlaps. You could also use multiple tracks of variations playing separate instruments in the same Impact XT kit to gain closer control of the sounds and rhythms.

The default velocity value for inserted notes is of 60 percent, but it’s easy to alter this. Select a row (instrument) in the grid and click Velocity in the row of parameters below the grid. The bar display shows the velocity of each note in the selected line: drag the bars to edit them (Screen 3). Velocity editing can create nice phrasing and note-to-note sound differences, and can bring out a sub-rhythm, while lower-velocity notes can simultaneously suggest yet a third, ‘ghost’ rhythm.

Screen 3: Velocity editing in the pattern editor. Note how the last four notes use velocity to sculpt a quick little crescendo.

On many instruments, note velocity also produces tonal change, yielding greater diversity of sound. Impact XT’s velocity control of pitch can go to yet another level of phrasing. The ‘secret sauce’ is in tuning the velocity amount to cover the right pitch range. Applying positive velocity modulation may mean you need to move the tuning or transposition down if you want the sound centred around the original pitch, or, conversely, pitch it up for negative modulation values.

Screen 4: Small amounts of pitch and filter velocity modulation, but full-on level modulation for this sound. Note that even with positive modulation, the pitch is transposed up a little, not down. This sound will always play back at least a little higher than the original. The filter is a low-pass in this case, which gets just a touch of velocity mod.Finally, velocity can be put to use controlling filtering per pad for still more tonal alteration. The most obvious tactic — and still a great one — is applying velocity to the cutoff frequency of a low-pass filter, such that softer notes are darker and louder notes brighter. That emulates the sonics of many acoustic instruments and works effectively in most circumstances (see Screen 4).

But another filter mod technique I like is applying a band-pass filter with velocity control of the cutoff frequency. Impact XT offers two band-pass filter types (‘ladder’ and ‘state’) for pads. Choose a filter type and the intensity of the effect will be determined by the modulation amount and the filter resonance.

Variations and velocity are quite enough to make engaging step sequences, but my new hands-down favourite feature for creating variety in a pattern is the Probability parameter. Here’s a few tricks to getting the result you want from this powerful feature.

First, select a sound and choose the Probability parameter below the grid. A bar graph appears showing the probability that each sound will play on any given pass through the sequence. At the default 100 percent, a note sounds every time; at 50 percent, it will play only half the times through (Screen 5).

But how many times through are we talking about? A history looking only at four passes through the sequence gets pretty predictable once the first pass is done. If the history looks at the last 20 times through the sequence, it gets more complicated. A note set to 50 percent might sound six times in a row, followed by two silences, two more notes, eight silences... nothing that feels close to ‘every other time’, but still, statistically, 50 percent. 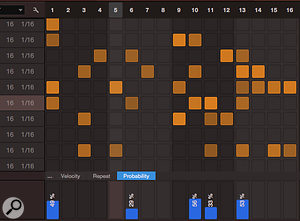 Screen 5: This is a pretty dense pattern, so none of the note probabilities on this instrument are even set as high as 60 percent. The result will still be quite active, but will not feel cluttered.In practice, probabilities of perhaps 75 percent or more feel to me like the note plays every time, even though it is noticeable when it is absent. That feel of continuity makes high percentages good for bass drums or other time-keeping elements, which you want pretty steady, though with a little give and take here and there. At the other end of the spectrum, values below 10 percent are useful when triggering long samples or loops, to reduce the chances of multiple copies of the sample playing on top of each other. At percentages that low, you lose all sense of that note as part of a rhythm.

In between these extremes, I’ve been setting many notes between 15 and 30 percent, to keep down clutter in patterns with busy rhythms and lots of sounds, while for general instrument riffing, 35-65 percent retains the basic feel but sounds more like groove than repetition. As you raise a note’s probability, it tends to become fundamental to the rhythm.

The ’80s were tragically tainted by four-bar drum loops that repeated identically for minutes at a time. Studio One 4’s Patterns and Impact XT make that trap easy to avoid. With the ability to have a very large number of sounds on tap and a number of different tools for shaking up the sequence, entire pieces can be composed using just these tools. We will tackle more new Studio One 4 features, but this one can hold you for a while.