If you're upgrading to Windows 7, you might be considering buying a 64‑bit version to access more RAM. But will you still be able to use all your 32‑bit plug‑ins? 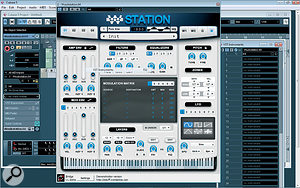 If you're having trouble mixing 64‑bit and 32‑bit audio host applications, plug‑ins and instruments, the third‑party jBridge utility may solve your problems. It's shown in action here running the 32‑bit Wusikstation inside 64‑bit Cubase 5.

As I mentioned in last month's PC Notes, Windows 7 is now available, and while a new operating system is highly unlikely to make audio software run more efficiently, many musicians with ambitious sampling requirements (such as those running giant orchestral libraries) are considering buying a Windows 7 64‑bit version so that they can utilise more than 4GB of RAM.

Musicians also seem to be beseeching developers to release native 64‑bit versions of all their favourite VST instruments and plug‑ins, but I doubt that this will happen widely just yet. Few developers can justify spending all the time needed to perfect a new 64-bit release that would sound identical to the 32‑bit version, unless users are prepared to pay for it. It seems far more likely that 64‑bit versions will appear, along with new features, as chargeable upgrades.

For many musicians, the lack of 64‑bit plug‑in versions may not be a problem, since most 64‑bit sequencers provide 'bit bridge' wrappers, so that you can carry on using your existing 32‑bit plug‑ins inside your new 64‑bit environment. There may be little practical advantage to having a 64‑bit version of your plug‑ins and instruments. After all, the latest BitBridge XR incarnation in Cakewalk's Sonar X64 allows 32‑bit plug‑ins to collectively access up to 128GB of RAM (the maximum supported by Vista Ultimate X64 or Windows 7).

On the other hand, Steinberg's VST Bridge for Cubase/Nuendo plug‑ins can only share a maximum of 4GB RAM (which is still significantly more than the standard 2GB of 32‑bit applications), but sadly it's not proving very compatible with third‑party products. Steinberg insist that VST Bridge is a 'transitional aid', and that it's up to all other developers to release native 64‑bit versions of all their products, but for the reasons given above I don't think this will ever happen across the board, and there are plenty of 32‑bit products (including some marketed by Steinberg) whose development has already ceased.

However, for those who do have compatibility problems with their 32‑bit plug‑ins inside 64‑bit sequencers, there's also a third‑party product that seems to be gaining a lot of fans. The demo version of jBridge (http://jstuff.wordpress.com/jbridge) can be downloaded and run for 20 minutes before it times out, and once you're happy that it runs your 32‑bit stuff, it's only 15 Euros to purchase a license. You can also use jBridge in conjunction with the dxshell wrapper available from Polac (http://xlutop.com/buzz/zip/dxshell_v1.0.2b.zip), to enable older DX plug‑ins, instruments and MIDI‑based MFX plug‑ins to be run in 64‑bit sequencer hosts, and even to run 64‑bit plug‑ins in 32‑bit hosts.

Have you ever found it difficult to play along with a standard click track? Bounce Metronome Pro (www.bouncemetronome.com) is a PC application supporting all time signatures, swing, and lots of clever stuff like paradiddles, polyrhythms and gradual tempo changes. Its secret is incorporating various visual options such as 3D bouncing balls, animated drumsticks and conductor's baton graphics. Rather like those used in karaoke machines, their rise and fall incorporates a 'gravity bounce' that feels like having your own conductor to help you keep in time.

I found it reliable enough to abandon audio clicks altogether and use as a silent metronome, which also makes it useful for deaf musicians. Studio owners could display it on screen in their live rooms to keep players in time without them requiring headphones, while a special screen reader is available to blind musicians too. It's a shame the current version can't sync to a sequencer, but I suspect that may come later. It's impossible to judge how well it works from from a static screenshot, but animations and demos are available on the web site, and the full version costs just $19.90.

Audiophile USB? If you have a D‑A converter connected to your PC via a USB cable, you may be interested in trying a new 'audiophile' USB driver from Aqvox (www.aqvox.de) that claims to provide a more open and transparent sound, by bypassing the Windows Kernel and substituting code of its own. Currently available for Windows 2000, XP 32‑bit, XP 64‑bit and Vista 32‑bit, the driver has a trial version you can download to judge for yourself, while the full version costs 99 Euros.

First USB 3.0 motherboard: Asus (www.asus.com) have unveiled their snappily named Xtreme Design P7DP55DE‑E Premium motherboard, the first to feature support for SuperSpeed USB, aka USB 3.0, which manages transfer rates of up to 10 times that of USB 2.0. It features Intel's P55 chip set, but uses a third‑party controller chip to add the USB 3.0 support.

Spyware Doctor with Antivirus 2010: This highly recommended utility is now compatible with Windows 7 as well as Vista and XP and, as you might expect, incorporates various improvements in its detection of 'nasties'. However, just as important for musicians, it also has a new optional Game Mode, which, when activated, skips scheduled scans or updates, disables alerts and pop‑ups, and sets real‑time protection to a lower level. It detects when your PC is running in Full Screen mode (which most applications do if you press the F11 key), making it ideal for audio sequencers and software, multimedia presentations, or movies where you temporarily need maximum performance with no interruptions. A year's subscription costs just $39.95 for up to three PCs (www.pctools.com/spyware‑doctor‑antivirus/).