Pads are the glue that holds entire genres of music together. We look at how you can improve yours.

We all look to established artists and past masters for inspiration, but in doing so there is one musical device that often escapes attention. The Pad is a term which is often used to describe brass or string‑like synth textures, frequently employed to bolster the texture and harmony within a track. How you approach the use of pads in your track may well fall to the style of the music you prefer to compose or produce, so let’s have a look at some of those concepts.

From dance tracks and pure pop, the presence of the pad stabilises a song’s harmonic stance, providing the perfect springboard for melody to run wild, but it’s not just the preserve of commercial artists; take any well‑respected feature film composer, and you’ll find the same notion littered throughout numerous film and television scores. Blending acoustic instrumentation with synthetic‑sounding production techniques, the pad has become a reliable tactic for engineering builds, swells, excitement or pathos.

Creating pads will require the use of at least two notes, and most likely three or more. The most basic of musical chords is known as a triad, which can be transported up and down the keyboard to other notes, to create a chord progression. Utilising the power of these three notes polyphonically will undoubtedly help your cause; it’s a strong sound, and ripe for pad exploitation.

The presence of the pad stabilises a song’s harmonic stance, providing the perfect springboard for melody to run wild.

Many of the early pioneers of electronic music had a small technical problem in this regard; if we hark back to the mid‑to‑late ’70s, almost all synthesizers were monophonic, meaning that playing chords was out of the question. There were examples of synths such as the Minimoog (equipped with a full three oscillators) being tuned in a fashion that allowed the playing of a triad with a single finger. Incredibly effective as this was, there were immediate limitations to the degree to which a song’s chordal structure could play out. Consequently, some artists moved away from synths, engaging with machines such as electronic organs or string machines, which could offer basic polyphonic operation, albeit with far more basic tonal control. These machines would mimic the sound of acoustic strings or brass instruments, but in most cases fairly unsuccessfully.

A minor detail such as acoustic authenticity wasn’t going to stand in the way of artists such as Jean‑Michel Jarre. If we examine his working ethos from his earlier career, his plan was to use these thin‑sounding textures as a starting point for exploration, adding outboard effects to heighten the pad‑potential. It’s also worth mentioning that his timeless classic Oxygene makes extensive use of triads, often deployed in very slow‑moving progressions.

Armed with any DAW, recreating similar and highly effective textures is not difficult. Beginning with an appropriate tonal source, you could just jump straight to a synth or sample of a string machine, such as the classic Solina. However, in the spirit of experimentation, let’s start with something less obvious. Don’t worry if the initial tone doesn’t grab you — we’ll work on that! 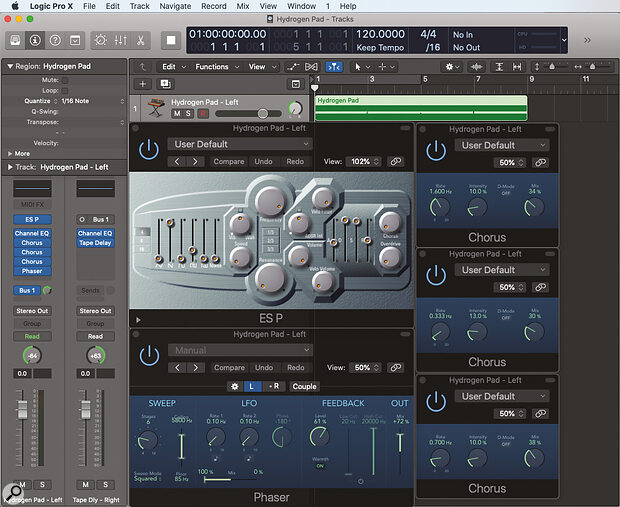 In my example, I have chosen to work with the ES‑P Polysynth which forms part of Logic Pro X. Importantly, any simple synth will serve our purpose. Our initial synth setup (screen 1) is basic, with a saw wave source and a wide‑open filter. As many of the original string machines offered the ability to produce two parts, normally one octave apart, I have also introduced a hint of sub‑oscillator, in the form of a square wave. This is not essential, but will act as musical‑cornflour, to thicken the texture.

The most striking element to this initial sound is that it does not sound terribly palatable! Early string machines were heavily reliant on chorus effects, often more than one, so to aid the process, I have deployed three chorus effects in series, but varied the rate of each to further assist the coloration. This would also be a good time to adjust the amplitude envelope setting for our sound source; most importantly, we need a full sustain, while a slow attack and release phase will add subtlety, as we move from one chord to the next.

Already, our sound is taking shape, but one large part of the original JMJ vintage sound was provided by the use of a Small Stone Phaser. This was a guitar pedal, made by Electro‑Harmonix, providing all sorts of vintage noise and coloration. It’s important to note that while this pedal is still available to purchase today, it has been revised considerably, and the original pedals are regarded by many to be the better‑sounding iterations of the Small Stone, albeit far noisier!

As we are working in the software domain, we can use a Phaser from within our chosen DAW, which we can now add to the end of our signal chain. For a true vintage sound, set the number of stages to a lower setting; four or six will do the job nicely, but we will also need to slow the LFO speed to a relatively meandering rate. I have chosen 0.1Hz in my example, while a healthy amount of Feedback will also be required, as this will apply much of the colour to our sound.

The final part of this jigsaw revolves around the stereo image. An effective trick, to provide the illusion of a larger pad‑based canvas, requires the use of a delay. By panning our newly created instrumental source to one side, we can apply a generous delay to our sound, which we will pan to the opposite side of the image. In my case, I am using a Bus (described as Auxiliary elsewhere) to send the signal to my delay. This will create the ingenious effect of our sound appearing on one side, only to feel like it is disappearing into the distance, on the opposite side.

I personally find it fascinating that armed with only a phaser and a delay, the organic and organistic texture created by JMJ made albums such as Oxygene sound so much bigger in production than they actually were. It’s a classic example of working with less, in order to produce more, which is something we often forget in the current age of DAW production.

As the ’80s dawned, expensive polysynths had infiltrated music production, followed closely by more affordable models. In an effort to produce cheaper machines, companies reduced the oscillator count to just one‑per‑voice, as opposed to the two‑per‑voice populating the more expensive predecessors. To keep the overall texture lush, chorus was provided on board, allowing modulation to be applied to the back‑end of the signal chain, at source. The Korg Poly 6 and Roland Juno 6/60 both employed this concept, with both now regarded as vintage classics as a consequence.

During the ’90s, advances in synth‑tech gave rise to the ability to multiply oscillators into a detuned swarm, ideal for enormous‑sounding pads. This gave rise to the Super‑Saw effect, led by synths such as the Roland JP‑8000 and Access Virus product line. The degree to which these machines infiltrated the ’90s dance scene was swift and ubiquitous. Any self‑respecting house or trance producer would use detuned, thick pad textures in abundance, with a sound that became synonymous with European dance music.

But what’s the next great thing in pads? One of my favourite routes to pad Nirvana shuns original pad convention altogether, by beginning with a piano. It’s also perfect for evocative music with a cinematic leaning.

Given how expressive pianos can be, it might seem surprising that some producers yearn for a more muffled piano sound. Armed with an appropriate upright acoustic piano, the practice pedal will do a fine job of providing this. In many cases, engaging the practice pedal introduces a layer of felt between the hammers and the strings, yielding a softer and quieter texture. This sound is often described as a Felt Piano, for fairly obvious reasons. It is also possible to have ‘felts’ fitted to pianos after manufacture, performing a similar function. We’re not all lucky enough to have a decent piano on hand, but fear not, as a quick trip to Spitfire Audio’s website can furnish you with their free Soft Piano sampled instrument, which forms part of their Labs series. You could also EQ a piano sample, in order to reduce its brightness in the top end.

While Spitfire’s instrument is a great example of a felt piano, you may well be wondering what this has to do with pads? Grab yourself a bright reverb with capacity for long reverb tails, and just play a basic triad or chord. The resultant pad‑like texture will be utterly beguiling! The Spitfire player also offers a relatively dark reverb on board, which is certainly useful in some settings, but for our purposes, we want something capable of a brighter tone with long decaying tails. 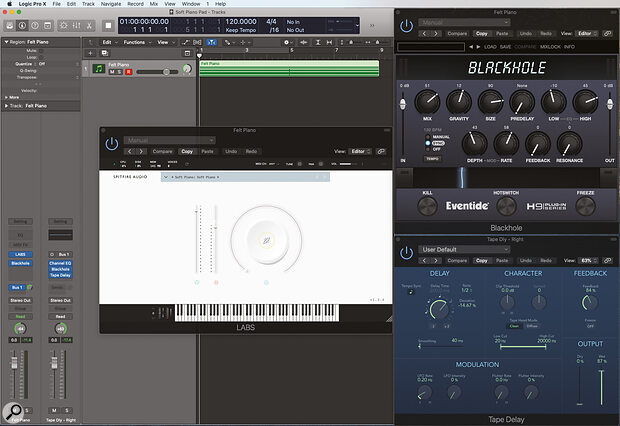 Screen 2: Vintage inspiration for a highly contemporary pad effect. Felt Pianos are a current go‑to for many media‑orientated projects.

All DAWs will offer some capacity for this sort of reverb construct, but I have my own favourite for this sort of work. Eventide’s Blackhole reverb has become highly prized by many producers and media composers. It is very flexible, but also performs beautifully in a scenario of this kind.

With a sense of osmosis and reverence, our signal flow here is not dissimilar to our vintage pad, but without the heavy use of modulation effects. Adding a generous reverb to the piano at source will yield a marvellous colour, however, our example (Screen 2) also utilises a bused or auxiliary signal to further enhance the effect, with extremities of left and right, just as before. By adding a further delay to the effect channel, the reverberation effect can be extended, creating a beautiful pianistic wash which disappears into the distance.

Admittedly, this style of pad work won’t be quite so useful for faster‑moving production styles, but it is beautiful for creating interesting backdrops, or filling a void that requires minimal musical support. Utilising compression and volume automation alongside this padded effect will prove essential for ultimate musical control of phrase lengths.

While past‑masters have given us permission to use pads as we see fit, either as the centre of attention or a star‑studded backdrop, grabbing the baton and taking things in a different direction can yield the most endearingly unexpected surprises. What starts as a padding for the texture of a track can easily transform into the central component of a production masterpiece, and one that may be made from a considerable sum of pad‑inspired parts — and who doesn’t enjoy a little extra padding?