Want to fake a 12-string guitar in Studio One, or create the perfect octave-divider effect? Keep reading…

Presonus Studio One can apply polyphonic transposition to recorded audio, and does its processing in real time, so there's no need to render a clip to hear the results of transposition. Just as with all pitch-transposition algorithms, the quality deteriorates the further you transpose, and harmonically complex sounds such as recordings with heavy saturation are harder to transpose. However, compared to the pitch transposers in typical multi-effects, the transposition in Studio One is downright high-definition. Of course, Celemony Melodyne is included in certain versions of Studio One, but I preferred not to use it for this column. This is not only to make the technique available to all Studio One users, but also because Melodyne is optimised for pitch correction, not simple transposition. Transposition takes place in real time, whereas tracks must be opened 'offline' in Melodyne for analysis and processing. I also find simple transposition gives somewhat better fidelity with guitar.

Although pitch transposition has many applications, in this column we'll apply it to guitar and create some pretty amazing sounds.

To access the transposition parameters, click on the clip you want to process, then open the Inspector (or type F4). The section in the Inspector's bottom third includes fields for Transposition (±24 semitones) and Tune (±100 cents). Enter the amount you want for the selected clip, and it's transposed. If you want to transpose multiple clips at once, select them before invoking transposition.

A dry guitar produces the most natural sounds to my ears when transposed, but you can also use processed sounds and, most of the time, they'll work fine. Just remember that Studio One's transposition doesn't transpose the formant, so transposing down an octave makes the sound a bit duller. Then again, that's often to your advantage. Transposing up imparts a bright, somewhat metallic timbre, especially if the input signal has lots of high frequencies. Fortunately, a little EQ can pull back on the highs and make the transposed sound sit properly in a track. One of the best ways to use transposition is on a copy of the track so that it blends with the original signal. We'll use that to good advantage in most of the following techniques. 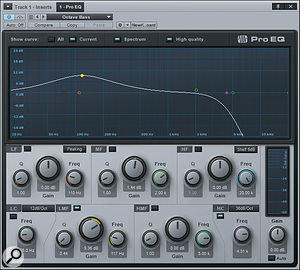 Following the octave-divided track with Studio One's Pro EQ can tailor the divided sound. This shows a curve for creating a traditional octave-divider timbre.

Studio One's transposition works very well for single-note 'octave divider' effects. After recording your guitar part, copy the clip, select the copy, then transpose it down 12 semitones. Unlike conventional octave dividers, which usually process the divided signal to make it bassier, what you put into Studio One is what you get out. If the original guitar part was a jazzy, neck-pickup-based sound with the tone rolled back a tad, dividing the signal gives a Wes Montgomery-style jazz octave effect. Conversely, if you divide an overdriven timbre, you'll hear a guitar-and-bass-playing-in-parallel sound with a nasty, snarling bass. Often this is what you want, but if not, adding a Pro EQ in the divided track can tailor the sound as desired. For example, if you want a traditional Mutron-style octave-divider sound, roll off the highs starting at around 2-5kHz with a steep slope such as 36dB/octave. Adding a broad boost centered around 100Hz produces a beefy, bassy effect.

You're not limited to single-note lines or to octaves, so one excellent trick for a power-chord-driven rhythm guitar part is to record your part, then overdub the same part but transpose the chords you play up two semitones. It may drive you crazy to try to play along with a track that's in a different key, but no problem — just listen to the drums, temporarily transpose the original rhythm guitar track up two semitones, and play along with that while muting everything else. On playback, restore the original track's pitch to normal, and transpose the part you overdubbed down two semitones. The overdub will have a darker, deeper tone that layers well with the original part. 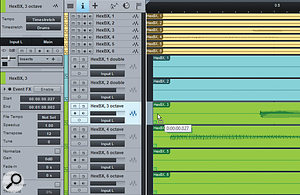 Record a rhythm guitar part, copy it, and then transpose it up an octave for a pseudo-12-string effect. This will be most realistic if you don't play the top two strings, as a true 12-string doesn't transpose them, but doubles them at the same pitch. Then again, if you prefer the sound of a 'true' 12-string guitar that's not constrained by physics and can tune a high 'E' and 'B' string up an octave, why not? To enhance the illusion of '12-stringness', nudge the octave-higher track about 25-30ms later. This emulates the strumming effect of the pick hitting the main string first, then the octave string a few milliseconds later.

The Joy Of Hex

Hex pickups that generate a separate output for each string are starting to crawl out of their guitar-to-MIDI conversion ghetto, and the ability to transpose each string independently can yield exceptional results. Several companies (Fender, Roland, Godin and others) already build hex pickups into some of their guitars, designed mostly to drive MIDI guitar synthesizers. Roland's GK-series hex pickups, while designed for MIDI conversion, are useable for audio with proper EQ. Piezo hex pickups also need EQ to make them truly viable for audio.

Gibson's Dark Fire, Dusk Tiger and Firebird X guitars come with a custom interface that provides computer-friendly hex outputs for recording, and Rolf Spuler's Paradis guitar can connect directly to your computer via Firewire to provide six outputs. Cheaper options include the Keith McMillen Instruments StringPort, a hardware/software package for Mac that can process Roland-compatible outputs as audio. RMC make a 'fanout' box that takes the output from a Roland hex pickup and provides six audio outs; if you're enterprising and know how to solder, you can even build your own breakout box. To pull out the individual strings from a Roland 13-pin DIN connector, pin 1 is the first string output, pin 2 the second string, and so on, up to pin 6; pin 12 is +7V and pin 13 is -7V.

Hex outputs make a variety of interesting tunings possible. Let's take a look at some.

12-string: Copy the original tracks with the six strings. Transpose the bottom four strings down an octave and detune the first and second strings. To retain the proper pitch centre, I usually tune the original first and second string tracks +5 cents sharp, and the copies -5 cents flat. Sometimes adding a little detuning to the other strings adds a more authentic (as in, "wow, these things are hard to tune”) vibe. Also, remember to delay the copied strings by a couple of dozen milliseconds.

I've never owned an acoustic 12-string guitar, but always wanted one. The emulation obtained with transposition and hex outputs is extremely convincing if I use the acoustic (piezo-based) patches from Gibson's guitars. Also experiment with transposing the copied first and second strings up an octave; this adds an unusual brightness that can really fill out a track. 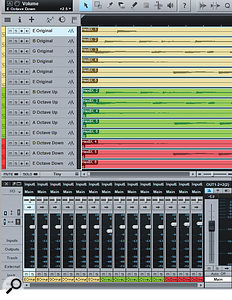 Here's my insane 14-string guitar. In the mixer, note how the three bass strings are boosted a bit, while the octave-higher copy of the second string is reduced somewhat to avoid sounding excessively bright.

Nashville tuning: Nashville tuning is basically like a 12-string guitar with the 'standard' strings removed. In other words, the 'D', 'A', and low 'E' strings are an octave higher than on a standard guitar. This produces a brighter, thinner sound that's often used to overdub against a conventional guitar part. Pan the two hard left and right and the sound is like the world's biggest 12-string. The Stones' 'Jumpin' Jack Flash' uses Nashville tuning on one of the rhythm guitars, as does 'Wild Horses'; you can also hear Nashville tuning on the Kansas track 'Dust In The Wind', 'I Stay Away' by Alice In Chains and, of course, numerous country hits. To fake this sound, you don't need to copy the original tracks, just transpose the bottom three strings up an octave.

Imaginary guitars: There are no limits to how many copies you make, and how you tune them. Make two sets of copied strings, then transpose one set of six up an octave, and one set down an octave. Now you have bass playing along. Another option is the opposite of Nashville tuning, where you transpose the bottom three strings down an octave. It's very interesting with power chords. One of my favorite tunings is copying the second to sixth strings and tuning them up an octave for the 12-string effect (but leaving the top note as is, so the bent high notes in single-note leads don't beat), then making a second copy of the fourth to the sixth strings and tuning them down an octave for bass (depending on the song, I may do this only with the fifth and sixth strings).

You can always add processing to these strings, like tempo-sync'ed delays at different rates on different strings. The mind boggles — have fun!