Optimise your vocal tracks in Sonar X2 before you start mixing.

Vocals are the focal point for most pop music, and tend to be mixed prominently. As the centre of attention, they need to be as clean, clear and artifact-free as you can make them — and that's where a bit of pre-mix optimisation and preparation comes in...

The Sound Of Silence

You may not hear low-level noise because other instruments mask it, but removing it makes a cleaner recording. Sonar X2's Remove Silence function removes most noise automatically, and you can set an attack and decay time to determine how long it takes for the signal to come back in and decay between removed sections. 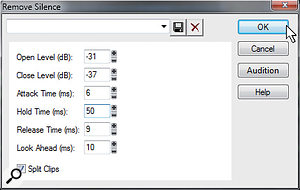 Select the clip to be processed and then, from the Process menu, choose Apply Effect / Remove Silence. This acts somewhat like a noise gate; the Open Level parameter is the level at which the sound is no longer considered silent, while Close Level is where removing the silence kicks in. The correct values depend on the clip's level, but -30dB to -35dB is a good place to start.

Attack and Release times of around 5 to 10 ms prevent overly abrupt transitions. The Hold time prevents 'chatter' if the threshold is fluctuating around the open and close levels; 50ms is a good start, as is 10ms of look-ahead. Ticking 'Split Clips' makes it easier to tweak attack and decay times later if needed.

After setting up the parameters, click on OK to confirm the operation. Afterwards, it's important to listen carefully to make sure nothing was cut off abruptly, because removing silence trims the clip. If you decide you've cut off too much of an attack, rolling out the clip won't solve the problem. You'll have to undo and try again.

While Remove Silence is fast, deleting silence manually gives the most flexibility. Choose the split tool, or hold down Alt with the smart tool selected. Cut at the end of one phrase and the beginning of the next. Delete the section between the splits.

To smooth the transition from signal to silence, or vice-versa, hover the smart tool over the fade handles, and add appropriate fades.

Even with a pop filter, pops will sometimes come through. They have a distinctive waveform shape and are easy to identify. 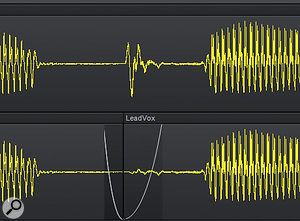 The Remove Silence function can clean up noise between phrases automatically.

Split the clip just before to pop. Then fade in over the pop; changing the fade duration and curve lets you preserve just the right amount of plosive. Usually, the slow fade curve is best. To prevent abrupt transitions, add another short fade-out to the end of the clip that occurs just before the pop.

This technique can also reduce noise caused by the singer pushing out air too forcefully. You can't remove too much without affecting intelligibility, so be careful.

Inhales are part of the human voice, and I prefer not to eliminate them. However, compressing vocals may accentuate inhales too much. Splitting before the inhale and applying a fade-in lets you dial in just the right amount of inhale. A slow fade causes the inhale to develop slowly, while a fast fade preserves a more percussive inhale character.

Before waveform editing, compression was usually the method used for boosting the level of quieter phrases, but that could make louder sections sound unnatural. If some words are low in level compared to the rest of a phrase, drag across the region that needs a level increase, and from the Process menu choose Apply Effect / Gain. (With a mono clip, which is typical for voice, only the Left Channel matters.) 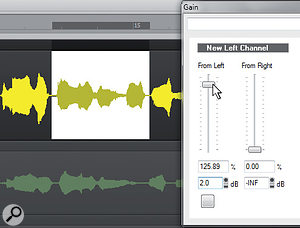 The selected section (in white) is about to have its gain raised by 2.0dB. The button below the dB field, if enabled, flips the signal's polarity.

Add a couple of dB, click OK and decide whether that has evened out the levels. Otherwise, undo and keep trying. When a clip's levels are better matched, compression can be more subtle and you'll still achieve a consistent level. Vocals have dynamics, so don't raise the levels of sections that should be soft.

Pitch correction has earned a bad reputation because of how often people over-use it or apply it incorrectly. But V-Vocal can apply subtle, surgical pitch fixes that don't affect timbre.

Sometimes all that's needed is to raise or lower the entire section with the arrow tool. But listen to the vocal in context, because accurate pitch is not always the best pitch. Good singers will sing slightly sharp or flat instinctively to add interest or tension, so don't eliminate these human nuances. Also, to retain a natural sound after raising or lowering pitch (you probably don't want chipmunk or Darth Vader effects), open the Formant screen and use the pencil tool to re-draw the formant line in the opposite direction to the pitch change.

If you need to tweak vibrato, use the pencil tool to redraw it. Zoom way in for the most accurate redrawing. To minimise artificial qualities, try to follow the curve as closely as possible, but just draw in a less or more drastic curve, depending on which is needed. V-Vocal has an easier time adjusting a waveform along its original direction than trying to counter the original pitch changes.

After fixing the pitch, bounce the clip to make these changes permanent, then close the V-Vocal editor. The original clip will exist either underneath or on top of the V-Vocal clip, but will be muted. Delete it if you don't need the original, although leaving it means that you can re-visit the V-Vocal processing later if needed.

De-essing, a variation on EQ, helps reduce excessive sibilance. VX64 has an excellent de-esser, although VC64 has a good one too. There's also a De-esser effects chain.

Insert the de-esser first in any processing chain, as de-essing will affect the sound and you'll want to add dynamics and EQ that accommodates those changes. When using the ProChannel effects chain, simply drag the de-esser to the top. If the de-esser is in the effects bin, right-click on a blank space in the header or in the ProChannel itself, and choose Post FX bin. 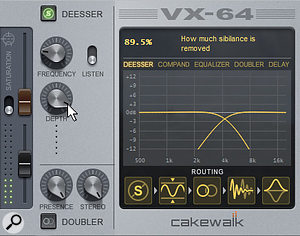 An important aspect of using a de-esser is to locate the area with the most sibilance before trying to cut it.

The easiest way to adjust VX64's de-esser is to loop a section that is suffering from sibilance:

Every voice and miking situation is different, so there are no 'universal' EQ settings. The high-pass filter is good for rolling off low end produced by excessive proximity effect. A steep, 48dB slope from the ProChannel EQ gives the added benefit of rolling off some of the p-pops and wind noises.

Drastic high-pass filtering at a frequency below the vocal range can reduce unwanted sounds from the vocal track.

If you need to increase intelligibility, add a high-frequency shelf starting at around 2kHz. I tend to use the hybrid EQ mode, although the E-type gives a slight mid-range dip that accentuates the highs and lows more. This can work really well with some voices.

Although it's best to tweak tracks in context, vocals are something of an exception, due to their importance: there should be enough bass for a pleasing depth, and clear upper mid-range and high frequencies for good definition. Of course, any EQ is subject to tweaking as the mix progresses.

Sonar offers several dynamics processors; some are 'optional at extra cost' ProChannel modules. To my ears, you can hear the PC76 U-Type compressor 'working' more than the others. The PC4K S-Type compressor set for the same approximate amount of compression is less noticeable.

The PC2A is my preferred vocal compressor, due to its effectiveness and lack of artifacts. The Sonitus:Fx compressor is also useful, because you can vary the attack time over a wide range. Slower attacks give a more natural sound, but let through peaks, thus defeating some of the purpose of compression. However, you can enable the Limiter button to trap excessive transients. The Sonitus compressor is not as transparent as some of the other options, but remains a good all-around processor.

The Concrete Limiter generally needs its threshold set quite low to even out the soft and loud portions. This can produce some heavy artifacts, but also yields an in-your-face compression effect. The Concrete Limiter is often effective for creating this super-present vocal effect without too many artifacts if the vocal levels are already fairly consistent.

VX64's compressor is more of a 'character' compressor, with a somewhat 'thicker' sound. I like this for background vocals, as it helps to differentiate them from the lead vocal. What's more, the Expander section can help to reduce background hiss or other noises. Although I usually use an à la carte selection of ProChannel modules for the main vocal, I'll often resort to VX64 for the background and harmony vocals.