Most Pro Tools operations are undoable — but some give you the option to commit permanently...

For many people, a big advantage of digital audio workstations is that everything they do is non-destructive and undoable. This stands in complete contrast to working with analogue tape, where so much of what we did was destructive, including editing and dropping in. If you didn’t cut tape in exactly the right place, you would end up hunting through the pile of tape on the floor for the correct bit, then trimming a very small piece of tape off and sticking it back on — and so on. If you missed a vocal drop-in point, you clipped off the previous word, and would then have to drop in earlier to fix the error, and so on...

When it first appeared, technology that allowed us to undo an edit or a drop in was revolutionary. Digidesign and then Avid have tried to make almost everything in Pro Tools non-destructive; you can go back and undo edits, because you are not changing the source media, and if you get yourself in a complete mess, you can always pull the source material out of the Clip List and start again, which was not something we could do in the analogue world! With Pro Tools 12.6 you can even get back edits and clips that have been completely covered over by another clip. There are still, however, certain operations in Pro Tools that are destructive, meaning that the original files are permanently overwritten — and in this Pro Tools workshop we are going to take a look at six destructive Pro Tools features to be aware of.

If you right-click on the record button in either the Transport window or in the Tool Bar at the top of the Edit window, a contextual menu pops up showing a range of Record options. One of these modes is Destructive. This allows you to record over existing audio on the timeline, permanently replacing the original. In certain situations, this can be useful. For instance, suppose you have to make one small change in an hour-long radio drama. Rather than re-bouncing the whole programme (which, in the days before offline bounce, was a real-time process), you could import the bounce to a track, and either patch the small area where changes are needed, then consolidate the clips to create a new final master programme file — or drop in in Destructive mode. When you do this, the new audio is written directly into the original file. Destructive Record by its very nature is not undoable, so you need to be careful when using this feature! 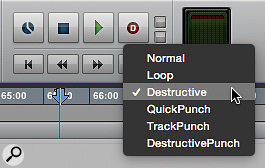 Destructive recording or punching in on a track permanently obliterates existing audio on the timeline.Another option in the Record button contextual menu is an HD-only record mode that operates in a similar way to Destructive Record, but with the added feature of being able to selectively punch in and out of a recording as the session runs. In order for this to work, a track must be ‘Destructive Punch Enabled’. You can only punch into an existing audio file, not into empty space. The file has to start at the beginning of the session, and it has to meet the Destructive Punch file-length duration you’ve set in the Pro Tools Preferences Operation tab. If any of these criteria are not met, you will be prompted to Prepare DPE tracks when you try to initiate recording. 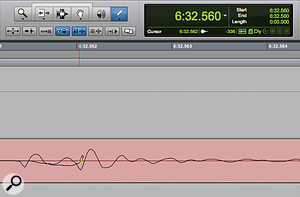 Although waveform drawing with the pencil tool is undoable, it’s possible to go beyond the number of levels of undo your system is set up to permit — making it destructive.Once you zoom far enough horizontally into an audio waveform, the pencil tool becomes available for waveform repair. This can be very useful if you need to remove short ticks or clicks from an audio file. You can simply draw them out with the pencil tool and they’re gone! However, this operation modifies the original audio on your hard disk; and although it’s undoable, once you’ve exceeded the maximum number of undo levels in your session, it’s impossible to revert back to the original file. This destructive editing operation should be used with care; if you really need to preserve the original audio file before editing, consolidate the clip and use the pencil tool on the consolidated version rather than the original. That way you can still revert back if needed. Remember that simply making a duplicate clip won’t do it, as the duplicate clip still refers back to the same original media as the original clip. You need a new audio file, and consolidating is the easiest way to achieve this. 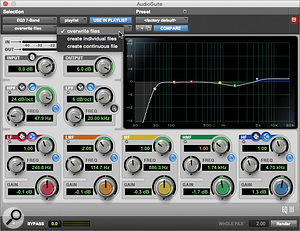 AudioSuite processing can be applied destructively, overwriting the original file rather than creating a new one.Normally, AudioSuite plug-ins render the processed audio to a new file, meaning you can always go back to the unprocessed version, because the original remains available in the Clip List. I try to park unprocessed but muted versions of the clips on an adjacent track, making it easy to go back and rework the processing if I feel it needs changing further down the road. However, if you click on the Processing Output Mode button near the top left of an AudioSuite plug-in, you’ll get the option to overwrite files. This is a destructive processing mode, and replaces the original audio with the processed version.

Once again, the destructive option is not undoable, and you’ll notice that the session undo history is cleared when you process audio in this way. Even if then you close the session without saving it, the audio on the drive will already have been replaced. Perhaps this mode could be useful if you’re really struggling for drive space, but I would suggest you think very carefully before using this one.

On occasions, you’ll want to remove clips from your Clip List if they’re no longer required. Just select the audio and choose Clear from the Clip List menu. You are then presented with four options: Cancel, Delete, Move To Trash or Remove.

Three of the four are more or less non-destructive, but the second option is definitely destructive. Remove simply clears the audio from the Clip List but leaves the original audio on your hard drive. Move To Trash clears the audio and moves the original audio into the trash or recycle bin on your computer. Delete not only removes the clips from the session but also deletes the actual audio files permanently. There is no way back from this option, so be very careful when you choose Delete because once you do, it’s gone forever! 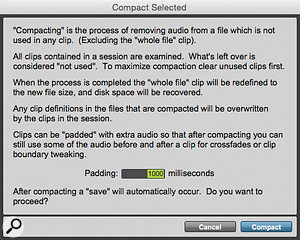 This is probably the biggest warning window in Pro Tools! Once you click Compact, there is no going back. You can also set the length of the ‘handles’ here, in milliseconds.The Compact... option can be very useful if you are short of drive space. You can find yourself in a position where a Pro Tools Session contains a 30-minute file of which you are actually using perhaps just a 20-second clip. Compact trims this to create a new file consisting of the ‘used’ segment plus some ‘padding’ at either end (often called handles) so you can still put a crossfade in right up to the edge of the 20-second segment. However, the destructive bit is that once you have compacted a file it cannot be undone. You can’t reclaim anything from that file outside the part you’ve chosen to keep, so it needs to be used with caution, but it can be very useful for slimming down a Session.

Many of the destructive features that remain in Pro Tools hark back to days of old when hard drive space was at a premium. Some, however, still have their place in current workflows, because under certain circumstances, it’s useful to be able to permanently delete or replace audio files. But by their very nature they need to be used with extreme caution. Once you have done it, there is no coming back!