As of June, the Hybrid Engine, first introduced with the Pro Tools | Carbon interface, will become available to all Pro Tools DSP users.

People have been predicting the death through irrelevance of DSP‑based Pro Tools systems since the release of Pro Tools LE back in 1999. Since then, the old TDM systems have been superseded by HDX. HDX always has been expensive, and the cost has made it largely out of reach for home recordists and even serious project studios. The proliferation of DSP‑based systems aimed at exactly these markets from brands such as Universal Audio, Antelope and Apogee strongly suggest that the advantages of DSP systems are significant, but that HDX perhaps wasn’t the right product to meet the needs of these users.

The launch last year of Pro Tools | Carbon surprised many. Avid’s return to in‑house manufacturing of audio hardware was a pleasant surprise (the recent MTRX and MTRX Studio were the result of partnerships with Digital Audio Denmark). But the release of a DSP‑based system aimed at the serious home recordist or project studio was in my opinion an entirely predictable event, as it neatly filled a hole in the Pro Tools product line. Very specifically targeted at band recording, Carbon has just enough I/O, headphone amps and DSP to track a typical three‑ or four‑piece band with no additional hardware beyond mics, cables and headphones.

The choice of AVB as a connection protocol drew comment, as did the lack of expandability, with no option to daisy‑chain units. The choice of AVB over other options was as carefully considered as the rest of the package; unlike Thunderbolt, the RJ45 is unlikely to be abandoned as a standard connector in the foreseeable future and, unlike Dante or Ravenna, AVB is deterministic in its latency performance and, as an official Ethernet standard, is likely to be around for a long time.

Those used to recording and mixing in Pro Tools using premium third‑party audio interfaces, particularly those who haven’t use HDX systems before, are often surprised at the constraints that come with using an HDX system. These issues are largely historical and based on the fact that HDX systems are designed to be used exclusively as DSP systems. The architecture gives deterministic performance, meaning that track counts, the amount of plug‑in processing power and, crucially, latency, are all fixed. As a result, a top‑of‑the‑range HDX system can often be outperformed by a native system on a particular task, but to be fair to HDX, the two approaches are fundamentally different and to directly compare HDX performance with a native system isn’t comparing like with like.

One is fixed, the other isn’t, and while tracking at 32 samples in a powerful native system might be satisfactory, the latency in an HDX system is lower, and guaranteed. Tracking at 32 samples with a suitably fast computer at the beginning of a project is very possible, but having to explain why you need to disable your look‑ahead bus processing plug‑ins and increase the buffer size when the vocalist wants to drop in a new line late in the mix stage isn’t going to go down well in a pro studio. This is why pro studios pay a premium for guaranteed performance.

A more difficult downside of HDX is that in any HDX system, there is a modern processor in the host computer which in most cases can do the same work as the HDX system, but HDX is constrained in how it can access those resources. It is possible to use AAX Native plug‑ins in an HDX system, but doing so is wasteful of resources, with each trip out of the Pro Tools DSP mixer to a native plug‑in and back into the DSP mixer using Voices and introducing latency.

When it was announced late last year, the Pro Tools | Carbon hardware was quite rightly the centre of attention, but in truth the technology behind Carbon was more significant than the interface Avid built with it. The Pro Tools Hybrid Engine is the really interesting part, and Avid’s recent announcement that the Hybrid Engine is going to be made available to all HDX users will address many of the perceived downsides of using an HDX system.

Avid’s recent announcement that the Hybrid Engine is going to be made available to all HDX users will address many of the perceived downsides of using an HDX system.

Previously, Pro Tools users were faced with a choice between DSP or Native. As previously said you could access AAX Native plug‑ins but doing so was always a last resort as the DSP resources burned in the process made it undesirable. This either/or choice between Native and DSP largely disappears in the Hybrid Engine, as the inclusion of a simple button in the Pro Tools UI means you can toggle tracks between low‑latency DSP mode and the flexible power of native processing at any point in the tracking and mixing process. 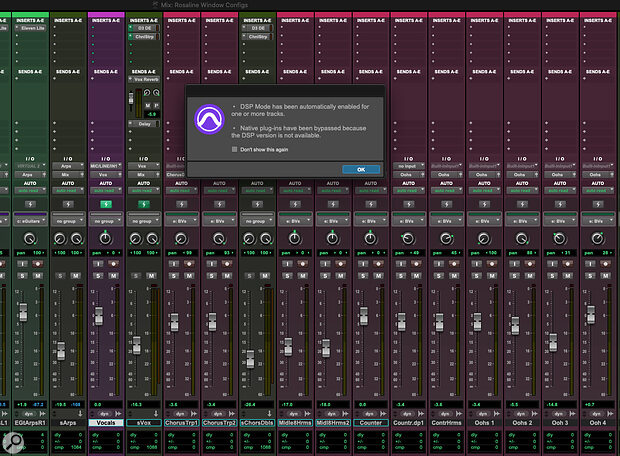 The Hybrid Engine in practice. Enabling DSP Mode on a track in your Session automatically switches all the plug‑ins on that track to DSP versions, essentially turning it into a ‘zero‑latency’ channel for recording.

The Hybrid Engine decouples the DSP hardware from the native mixing engine, and this allows users to run mostly native sessions, only relying on DSP on desired tracks during recording. This ability to choose between DSP and Native on a per‑track basis is just as relevant to HDX systems as it is to Pro Tools | Carbon systems, as it extends the usefulness of the available DSP in both cases.

The most immediate benefit to HDX users is that their track counts will no longer be constrained by their available DSP and the number of HDX cards they have installed.

The switching between DSP and Native modes in Pro Tools has been carefully thought through. When DSP mode is instantiated on a track, all the tracks through which that audio path is routed are switched to DSP mode too, preserving a low‑latency DSP path from input to output. There is the option to exclude tracks from this inherited DSP mode; an example of when you might wish to have that happen is on a reverb return. Reverb plug‑ins are more efficiently hosted as native processes, and a small amount of latency on a 100‑percent wet reverb return is perfectly acceptable. Native AAX plug‑ins are changed to DSP versions, and if no DSP version is available the remaining Native plug‑ins are bypassed.

The only users who are excluded are users of virtual instruments. AAX DSP Virtual instruments don’t really exist. The TDM version of the Access Virus is a fondly remembered exception to this, but if something like Falcon 2 were available as AAX DSP it would be wonderful. There are of course all sorts of engineering reasons why this won’t happen, but it would be awesome. Frankly I’d settle for an AAX DSP Xpand!, with upgraded pianos of course...

Avid have announced that the Hybrid Engine is coming to all HDX users in June 2021. The most immediate benefit to HDX users is that their track counts will no longer be constrained by their available DSP and the number of HDX cards they have installed. The optional Voice packs which extend the Voice count in HDX systems offered a way to extend the available voices to HDX users, but the Hybrid Engine will make 2,048 voices available to all HDX users regardless of their configuration. With this system effectively decoupling the Voice count from the hardware, the usefulness of existing HDX systems will receive a major boost.

As a user of Pro Tools | Carbon, one of the most unexpected things I really enjoyed about it was the ability to plug an electric guitar into the variable‑impedance instrument inputs, instantiate an AAX DSP Eleven II and play my Strat through the (still great‑sounding) Tweed Bass or AC Hi Boost amps at near‑zero latency. The difference between low and no latency is huge. It occurred to me that what I had here was pretty much a new Eleven Rack. The Eleven Rack is still so highly regarded by its users that the inevitable day when this very old product will be ‘doorstopped’ by an OS upgrade has to be at the back of the minds of all those happy users.

Avid’s update to the Eleven Rack software allows it to run on Mac OS Catalina and Big Sur, and also lets you change the clock source and sample rate using the driver control panel.

The good news is that Avid have surprised everyone by issuing an update to the Eleven Rack drivers, bringing compatibility for this classic device to Mac users on both Catalina and Big Sur, as well as support in Pro Tools 2021.3 and above. Usability has also been improved, as while Eleven Rack can be used as a main interface, many users connect their Eleven Racks via a digital audio connection like S/PDIF. The new driver gives access to the clock source and sample rate from the driver’s control panel, meaning that you don’t have to access it from Pro Tools — previously the only way to access these parameters.