Markers are a handy way to identify song sections, allowing you to instantly jump between them using keyboard shortcuts.

We explore some of the less common uses for Markers and Memory Locations.

Markers help you to quickly recall specific locations along the timeline. Uses for Markers vary, but marking out sections of a song is an almost universal practice, as is setting Markers at significant points during a take, to flag up any issues in a performance for potential edits and fixes. Markers use Pro Tools’ Memory Locations feature, though they are not the only option for creating a Memory Location. Hit Enter to open the New Memory Location window and you’ll see the default setting between the three radio buttons in the Time Properties field is Marker. When creating Markers on the fly, these Memory Locations are what gets created.

Dropping Markers on the fly to map out sections of a song during a first listen‑through is standard practice for many, and when doing this one of the biggest issues with Pro Tools’ system of Memory Locations can become apparent. Memory Locations each have a number, automatically assigned and starting from 1. You can manually assign any number you want, but if you choose a number which has already been created, you will overwrite the existing Memory Location — an action which cannot be undone. Unfortunately Pro Tools has only one Markers ruler. More would be extremely useful, for example having one ruler for marking out song sections and a second to highlight things that need fixing. There are some workarounds though, including a devious way to re‑number Memory Locations without having to manually (and very laboriously) renumber them all... 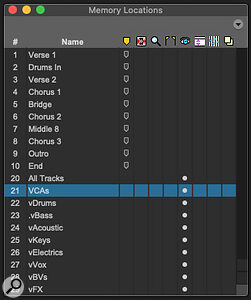 Hitting Enter brings up the Memory Locations list, which will include any Markers you have created.

The significance of the Memory Location numbers is that they can be quickly recalled from the num pad using the well‑known ‘decimal point / number key / decimal point’ keystroke combination. But if your timeline order differs from the order in which they were created then things can get confusing, particularly if you have named the Locations. Marker numbers can be edited but if you want to change Marker 7 to Marker 1 and you already have a Marker 1, you need to move Marker 1 to an unused number first. If you need to do this all the way along the timeline things can get very tedious. The fix for this is to export a MIDI file, delete your Memory Locations (by selecting Delete All from the drop‑down menu in the Memory Locations window), and import your MIDI file, remembering to tick the ‘Import Tempo Map From MIDI File’ box in the import dialogue. Your Markers will be imported but re‑numbered into timeline order!

If you already have Memory Locations that aren’t Markers then, rather than deleting all of your Memory Locations, you’ll need to delete them manually. As you can’t select multiple Markers in the list the simplest way to do this is to select them on the Markers ruler and hit backspace, but it’s worth knowing that you can quickly delete Memory Locations from the list by holding Alt/Option and clicking in the list. The pointer turns to a pencil eraser and, when used in combination with the filtering available in the Memory Locations list, it’s very quick to clear out the list to your requirements. 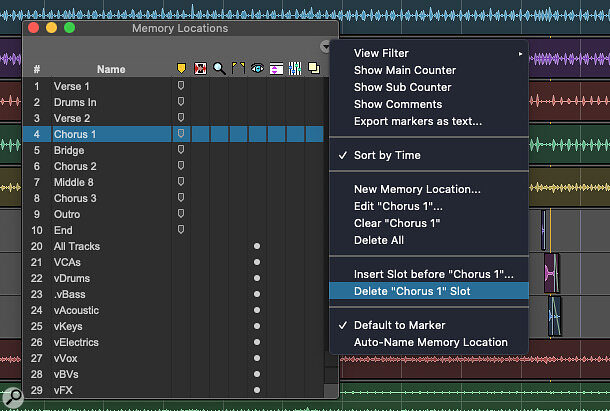 Memory Locations can either be cleared, leaving the Location entry and number intact but removing all other attributes, or deleted, which will re‑number all subsequent Memory Locations so that the numbering remains contiguous.

It is also possible to insert a slot below the currently selected slot. Say you delete a slot rather than clearing its contents. All your Markers will get renumbered, and while such an action is undoable, if you happen to notice too late to undo it, you can just create a Memory Location slot to nudge all your memory locations back to their original numbers.

Why does the specific number matter? Well, it only matters if you are used to having specific Memory Locations always on specific numbers. For example, I’m used to having Marker 1 being the start of the song intro, as opposed to the start of the session, and the subsequent numbers being in chronological order through the song: verse, pre‑chorus, chorus, etc. I’ll usually reserve the first 19 slots for this, even though I wouldn’t expect to use all of them. The slots from 20 I usually reserve for...

Anyone who has used a proper Pro Tools control surface will probably have come across VCA Spill. It is the system whereby pressing the appropriate button ‘spills’ the contents of the Mix Group controlled by a VCA fader out across the surface. This functionality can be largely replicated using Memory Locations.

As I said at the beginning, the Time Properties field in the new Memory Location dialogue offers three choices: Marker, Selection and None. Markers we have discussed. Selection allows you to recall an edit selection. The other properties which can be recalled include Zoom Settings, Pre and Post Roll Times, Track Visibility, Track Heights, Group Enables and Window Configuration. Any of these can be used in combination with any of the three Time Properties options. While it isn’t possible to save a blank Memory Location, it is possible to link a Memory Location to a Window Configuration and select None, which is effectively the same thing — potentially useful if you want to reserve slots to make sure you don’t occupy them. 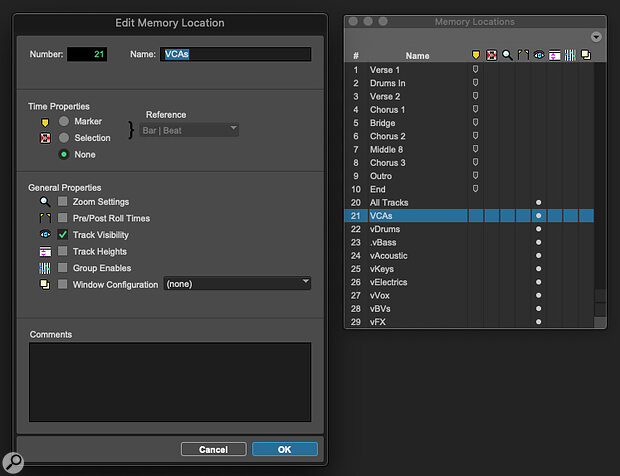 Among the settings for Memory Locations is Track Visibility, which you can use in much the same way as the ‘VCA Spill’ feature found on EuCon controllers.

Returning to Fake VCAs. Of these General Properties, for me the most useful is Track Visibility. It’s a powerful way to manage large sessions, allowing you to avoid scrolling up and down a session which is larger than your monitor is deep by setting up presets of only the tracks you need to see, depending on what it is you are doing — much like spilling the contents of a VCA across a control surface. Setting these Memory Locations up is straightforward. First, select the tracks you wish to hide. Combinations of Shift‑clicking contiguous selections of tracks and Command‑clicking to add and remove tracks from the selection speeds things up here, as does working from the Tracks sidebar rather than the Edit or Mix windows. Then use the Show/Hide Selected Tracks command from the Tracks sidebar menu and save a Memory Location with None selected in the Time Properties and Track Visibility selected in the General Properties.

Anyone who has used a proper Pro Tools control surface will probably have come across VCA Spill... This functionality can be largely replicated using Memory Locations.

The real usefulness of these fake VCA Spills comes from consistency in their application. The first thing I do is set up a Memory Location at number 20, which shows all my tracks apart from inactive tracks. To do this Option/Alt‑click on one of the show/hide dots next to the track names in the Tracks sidebar. Then select Hide Inactive Tracks from the sidebar menu. At 21 I have just my VCA masters. From this Location I can balance the main elements of the track from a handful of faders. From 22 upwards I set up Locations showing elements of the track as I see fit, such as drums, guitars, BVs and so on. I usually set the Locations to show each VCA and its member tracks. Hence the name fake VCA Spill. I keep them as consistent as I can between sessions using a template.

This might sound a little like Folder Tracks, and while this workflow predates the introduction of Folder Tracks it is complementary to them. Using Folder Tracks it is quick and convenient to show and hide groups of tracks. Awesome as they are, there are restrictions. They are, by definition, ‘dendritic’ — they have a tree‑like structure where a track is either in a Folder or it isn’t, and while a Folder can be within another Folder, it can’t be in two unrelated Folders at the same time. Groups and VCAs don’t have this restriction, and as such a track can have membership of any group. Luckily this isn’t an either/or choice and there is a place for both Groups/VCAs and Folder Tracks.

Even more conveniently, the folded/unfolded status of a Folder Track is recalled with the Track Visibility of a Memory Location, meaning that you are free to use Folder Tracks in combination with Memory Locations to recall and display groups of tracks without having to be constantly hitting Shift+F to toggle their status.

Lastly, if you like the feeling of control offered by techniques like these, where tapping in a keystroke brings you straight to the tracks you need access to rather than scrolling around Pro Tools, then you would definitely like Layouts, the powerful related feature on EuCon control surfaces. Apart from the satisfaction of having faders flutter as you recall your Layout, with a Layout it’s a single button press rather than ‘dot / number / dot’. When you do something a lot, it’s the little things which make the difference!