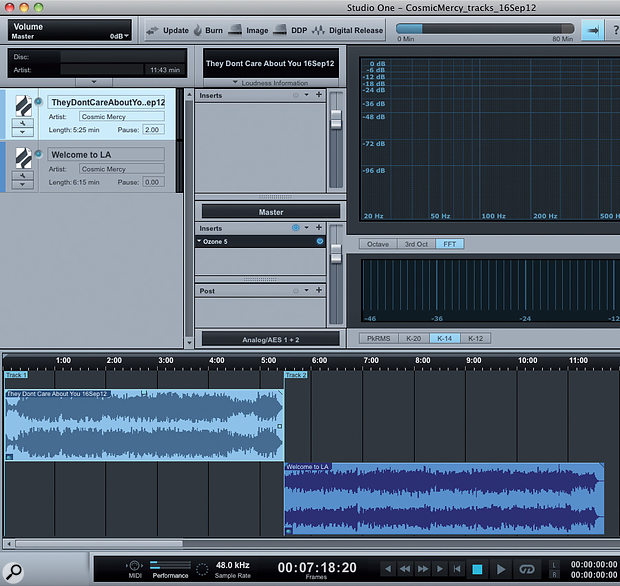 1. A Project holding rough mixes of in-progress songs. Clicking the Edit Song button opens the song in the Song page for further recording, editing, or mixing.

A different perspective on Studio One's Project page could unleash its true potential...

A true DAW ninja does not view a feature by its intended use, but by the actual function it performs. The difference is that a functional perspective is more generic, leading to the entire DAW being viewed as a toolbox. So, with this in mind, I am going to take a look at how the Project page can be made to serve beyond the standard mastering scenario for which it was created. These techniques hinge on seeing the Project page in its generic form, as a place where Songs and files are collected into a whole, yet are still individually accessible.

In its most common application, a Project is created when mixes for an album or other work are completed and it is time to bring them together and master the songs into a coherent whole — the album. But why wait until the mixes are done? The Project page makes an excellent access point for songs in progress. Try this:

This enables you to instantly open and work on any song you please, or even jump around between them, and, at the end of each day, listen to how the album is progressing. You can even burn yourself a reference CD or create and upload in-progress rough mixes for people to hear on Soundcloud. Hearing each song's evolution in the context of the whole album facilitates sonic consistency in the album. By the time you get to the final mastering stage, the album is already in the ballpark because, as mixes usually do in DAW production, the mastering is evolving as the songs develop.

There's only one fly in the ointment. What if you recorded at a 48kHz (or perhaps higher) sample rate, but your final product is going to be a CD, which has a 44.1kHz sample rate? The easy solution is to create a Project with the same sample rate as the songs. When you burn a CD or make a disk image, Studio One can sample-rate convert to 44.1kHz in the process. No problem. 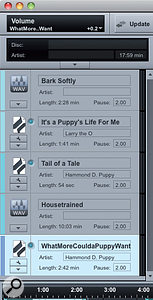 3. This Project has a 44.1kHz sample rate. What Studio One shows you is that the first and fourth tracks are audio files (as indicated by their WAV icons and lack of Edit Song buttons), rather than song files (indicated by Studio One icons). What it does not show is that the first file has a 96kHz sample rate, while the fourth one is at the Project rate of 44.1kHz. It also does not show that the last track is at 48kHz, as the song it came from is at that sample rate.

Ah, but we all know that if things can get more complicated than that, they will. I am working on an album now that has some songs recorded at 44.1kHz and others at 48kHz. What then? Actually, the process turns out to be only a little more complicated:

When all of the songs are finished and you are ready to master, there is one extra step. I have not done a direct comparison in Studio One, but non-real-time sample-rate conversion typically sounds superior to real-time sample-rate conversion, mostly because higher-quality algorithms can be employed when real-time performance is not an issue. For final mastering, we want the highest quality, and we will presume that, since you've been hearing the songs in album context as they were built, editing and mixing are complete and we won't have to go back and edit any of the 48kHz songs any more. Thus we can sacrifice the ability to instantly edit the song in order to gain a mix file at the proper sample rate.

If, like me, you have a master clock in your studio, it may be easier to switch your interfaces to their internal clocks when you have to go back and forth between a 48kHz song and a 44.1kHz Project, rather than to change the clock setting every time you go back and forth.

The ability to instantly update mixes in a Project file can be used for the common tactic of creating mix variations such as vocal up, vocal down, bass up/down, and so forth.

The Project page is also great for delivering 'music minus' mixes (mixes with one target instrument removed) to a musician learning new material from demos. In many cases, it's not even necessary to save versions.

1. Build a Project containing basic mixes of all of the songs to be learned.

3. Once the appropriate channel(s) has been muted, update the mastering mix. When you have done this for all of the tunes, you can burn a CD or bounce out files of all the 'music minus' mixes.

4. Repeat steps two and three for each instrument for which you want 'music minus' mixes.

When viewed from a generic functional standpoint, Studio One's tools become even more powerful, not just because one starts to recognise more opportunities to use them, but also because it starts to become natural to think of employing them in combination to solve specific problems that fall outside the usual workflows. A composer orchestrates by conceiving how the characteristics of individual instruments can be brought into play to achieve some musical goal. DAW features can almost be thought of similarly, and applied in ever more creative ways to accomplish interesting and powerful audio tasks.