Screen 1: Two lanes of parameter automation on a Thor synth track, and a subsequent section where automation has been embedded in a Note Clip.

We take a tour of Reason’s extensive automation facilities.

Automation, motion‑sequencing, parameter‑locking, rubber‑banding, clip envelopes, performance capture. Most of the music tech software and gear we use has some concept of recording and reproducing parameter changes. Most likely you’ve done this in Reason by simply putting the transport into record and twiddling some knobs on the focused instrument in the Rack. But there’s a lot more to dig into, such as editing, mixer automation, multitrack automation, and the difference between MIDI CC recording and Sequencer automation.

As a jumping‑off point let’s look at some automation on an instrument. Screen 1 (above) show’s the track for a Thor synth. Notice that there are two different arm buttons in the synth’s lane. One is for recording MIDI, the other (with the little graph icon) is for recording device automation. By default both are armed upon selecting the device.

Just like when you record notes, you can capture parameter movements in real time while the transport is recording. In the screenshot I’ve twiddled the Filter Cutoff and Envelope Decay, resulting in two clips being placed into separate sequencer sub‑lanes. Automation data in Reason always exists within a clip. Notice that the first clips are separate from the note clips: something you’ll need to take into account later if you need to move or edit this performance as a whole.

There is another option, shown in the clip, that starts a couple of bars later. If you tweak standard MIDI controllers like Pitch‑bend or Mod Wheel while you’re recording notes, the information is captured directly into the Notes clip. You can also choose for this to happen with any automation recording, by choosing Option / Record Automation Into Note Clip. Recording into note clips makes a lot of sense for modulation that’s integral to a section of music — much like Ableton Live’s concept of a Clip Envelope.

So what about automating a device that doesn’t have a track to arm in the sequencer? Or automating the Mixer? In either case the automation needs to go into a track, and there’s a couple of ways to get started. If you are looking at the Rack you can right‑click any device and choose ‘Create Track for Device Name’. After doing this the device will be immediately selected and armed for automation recording, so you can simply start the transport recording and capture movement.

For mixer channels this method works if you find the channel input module in the Rack and right‑click it, but there’s a more immediate route. If you Option‑click (Mac) or Alt‑click (Windows) on any parameter in either the Rack or directly on the Mixer itself, an Automation lane is created for that parameter. This can be useful if you want to create modulations via editing, but it’s also a quick way to create a track for a device that doesn’t already have one. Any automated mixer channel gets its own Sequencer track, and if you Alt‑click anything on the Mixer’s master section you’ll get another track called, you guessed it, Master Section. In Screen 2 you can see separate tracks for the Thor synth, a VST effect device it routes through, the Mixer channel for this chain and the mixer’s master section. 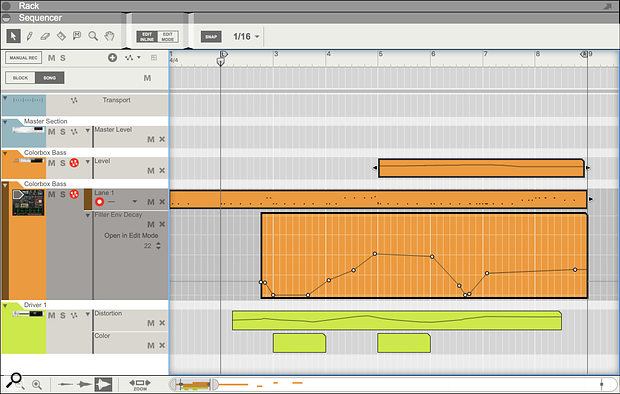 Screen 2: Here, in addition to the synth’s instrument track, separate tracks have been used to capture automation of an effect module it’s routed through, its mixer input channel, and the mixer’s master section.

Automating VST plug‑ins is only slightly different to these other cases. For a VST instrument no preparation is required. You can simply arm its track and drop into record to immediately capture parameter movements you make in the plug‑in window. As always, each parameter’s automation data will be written to its own channel. For a VST effect you can again right‑click the Rack host device and create a track. However, Opt/Alt‑clicking does not work in the same way as for native Reason devices. Instead, if you want explicitly to create an automation lane you need to click Automate in the plug‑in window (Screen 3) then click a parameter. 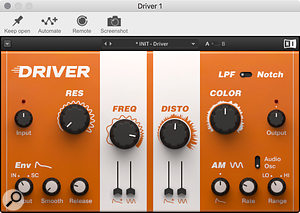 Screen 3: To create automation lanes for VST plug‑in controls you can use the Automate tool. Alternatively you can simply create a track for the device and start recording in real time.The implications of having parameters that have been automated can vary quite a lot between different DAWs and hardware instruments. What happens in places outside the automated area (sometimes called ‘virgin territory’)? What happens if you move the parameter during automation playback?

Parameters that have never been automated in a project are ‘free floating’: you can move them freely and they’ll always stay where they’re left. As soon as any automation exists anywhere within the timeline different rules apply for that parameter. Parameters that have been automated are indicated in both the Rack and the mixer with a green outline. Areas outside of any automation clips will snap to a static value. This is the value that the parameter was at before any automation was recorded, but you can change this. In Edit Mode static values are set with pointed sliders to the left of each lane (as in Screen 4). When not in Edit Mode, the static value for a lane can be seen if any of the clips have been expanded by double‑clicking.

During playback you are free to adjust an automated parameter. As soon as you do so it will stop following its automation data and will remain at the value you leave it. The green outline will disappear, indicating that the parameter is overridden (but not overwritten unless you are in Record). If you stop and start playback, parameters will snap back to their automated positions and will no longer be overridden. This does not happen when playback loops or you jump to a new position during playback. When any automated parameters have been moved during playback, a green Automation Override indicator appears in the Transport bar. You can click this to clear all overrides and the parameters will resume their automated playback.

Keeping automation in clips as Reason does might seem like a weird idea, but, as we’ve seen, it makes it easy to separate out the concept of dynamic and static sections. It also makes moving around logical chunks of automation unusually easy compared to DAWs that use continuous graphs.

Getting in and editing the actual data within the clips varies a bit depending on whether you have separate clips, or automation in note clips. Double‑clicking a Note clip always puts you into Edit mode, with automation remaining as clips within separate lanes below the piano roll and velocity lanes (see Screen 4 again). To edit an automation graph you need to double‑click again on a specific clip. When you are already in Edit mode, automation that has been created on separate lanes will appear the same, unified on the same lanes as embedded automation. However, when you’re not in Edit mode you can double‑click automation that’s on dedicated lanes and get straight into the graph in ‘Inline Edit’ view.

Graph editing is fairly intuitive. You can move individual breakpoints to change the graph shape. Ranges of points can be lasso‑selected and moved as a group. Selected points can also be deleted, duplicated, or copied and pasted. Double‑clicking creates a new breakpoint, and you can temporarily switch to drawing with the Pencil by holding Command or Ctrl. Finally, automation lanes all have their own Mute button so that you can suspend the automation affecting any parameter. And if you want to start afresh the X button will remove the lane entirely.