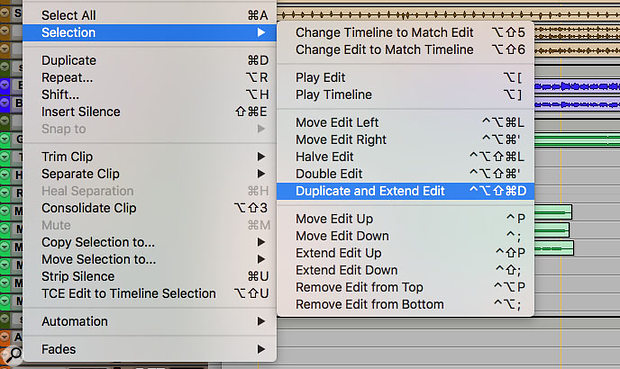 The new Duplicate and Extend Edit command helps create multiple copies of a clip or selection.

Avid’s new ‘little and often’ update strategy is delivering some really useful improvements. We look over the most recent.

As you’ve probably noticed, Pro Tools 12 was the final version of Pro Tools to follow the conventional integer version naming that began with Pro Tools 1 all the way back in 1991. Since January 2018, the numbering scheme for new Pro Tools versions has changed, and now consists of two numbers denoting the year and month of release. The biggest update so far under this scheme has been Pro Tools 2018.1. Released in January 2018, this introduced the much-requested Track Presets feature along with MIDI enhancements, new Playlist features and EQ curves in the Mix window.

Since January there have been updates, a name change for Pro Tools HD to Pro Tools Ultimate and the bundling of the Complete plug-ins bundle for Ultimate users. However, since April things had been quiet until the end of July, whereupon the release of Pro Tools 2018.7 introduced more welcome new features. The focus seems to be fixing those parts of the Pro Tools interface where it is necessary to repeat actions over and over again. Viewed from this perspective, many of the new features sit together as a coherent group, making it possible to do in a single operation what you previously have had to do over and over again.

Continuing the theme of no longer having to repeat actions in menus because the menu closes every time an action is performed, there are now tick-box-based menus in some key areas of the interface which speed up UI setup significantly. I was particularly pleased to see that the menus affected include the show/hide menus for the Edit and Mix windows; it has always been possible to Alt-click on sends or inserts to quickly hide them, but to bring them back necessitated going to the show/hide menu. If you had hidden multiple elements you would have had to reopen the menu for each element to be restored. Now, with tick boxes, all the options can be set in a single operation. 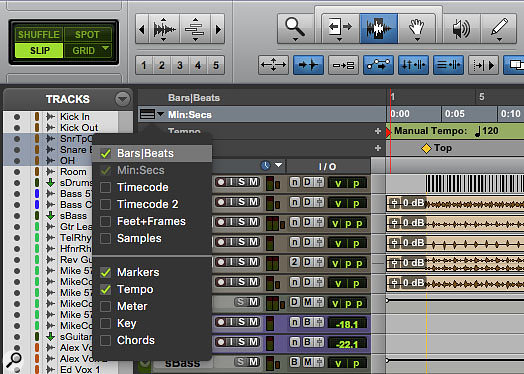 The menus that have gained this feature are the Edit, Mix, Transport and Rulers View menus, the Edit window toolbar (the blank space at the top of the edit window) and the Workspace browser columns view — which, if you’ve never investigated it, is an enormous menu. In previous versions of Pro Tools there was an option to hold Command (Ctrl on a PC) to make multiple selections from this menu, but this has been superseded by the new tick-box system.

One context in which I’ve sometimes found myself repeating an action even though there was already a more practical alternative is repeating a clip along the timeline. The Duplicate command (Command+D on Mac OS or Ctrl+D on Windows) creates a single copy of the selected clip or edit selection and appends it directly after the selection. For creating multiple copies, there has always been a Repeat command (Alt+R), but many users take the approach of duplicating a clip, selecting both the original clip and the duplicate clip and duplicating again, then selecting all four copies and duplicating those, and so on, doubling the number of copies each time.

The new Duplicate and Extend command automates this doubling of the selection, simplifying the process of filling the timeline with copies of clips. The shortcut for this is to hold down all four modifiers and press ‘D’. A related feature is grid offset copy and paste; Pro Tools has always had a Relative Grid mode,`but grid offsets haven’t been preserved when copying and pasting. This has been addressed in 2018.7.

Under some circumstances, it has been possible to use a special low-latency monitoring mode in native versions of Pro Tools, but it came with some restrictions. One of these restrictions was that only tracks routed to outputs 1+2 of your interface could be monitored in this way, and another was that sends were bypassed. Both of these issues have been addressed, meaning that those users affected by these issues no longer have to mute their software monitoring path manually to avoid slapback echoes caused by double-monitoring. Sends can now persist on low-latency-monitored tracks if you set them up to do so in Preferences — meaning, for example that you can keep your reverb on during takes. About time!

The new Target Playlist features introduced in 2018.1 have been supplemented with some new navigation functionality and the ability to target the same playlist across all tracks using Shift-click (nice). Other existing features relating to edit selections have been reintroduced to longtime Pro Tools users who might have missed them, thanks to their inclusion in the Edit menu. For example, did you know that you can halve the length of an edit selection using Command+Option+Ctrl+Shift+L? How about removing the topmost track from an edit selection across multiple tracks using Option+Ctrl+P? You can now find these and more in the Edit menu under ‘Selection’.

At the time of writing, there has been another hiatus in the anticipated monthly updates to Pro Tools, but this release — which brings what I’m calling ‘housekeeping’ features to the program — makes the experience of using Pro Tools smoother, less repetitive and faster. In the absence of the pressure imposed by paid integer upgrades that require big and exciting headline features, we can hope that the idiosyncrasies in Pro Tools will continue to be addressed under the new system. 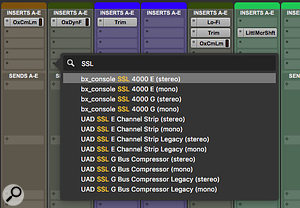 The new feature that seems to have received the most attention when 2018.7 launched is Insert Search. It has long been a grumble amongst Pro Tools users that it isn’t possible to organise the plug-in menus beyond arranging them by category and/or manufacturer and choosing favourite dynamics and EQ plug-ins. (Actually it is also possible to display all plug-ins as a flat list, but why anyone would do that to themselves is beyond me!)

Rather than offer a customisable plug-in menu, Avid have provided an alternative to using the menu at all. Simply click on an insert slot and start typing, and a search field will automatically populate with up to 20 results from plug-ins or Track Presets. This search isn’t restricted to inserts; similar searches can be made for sends, inputs, outputs and side-chains.