Ripple Edit In Studio One 4

We explore the powerful new ripple editing feature in Studio One 4.

Last month I wrote about techniques for handling narration in Studio One, but I did not mention a tool that has obvious applications in this role: the new ripple edit feature in Studio One 4. Ripple editing is also commonly used when creating sound for picture, but Studio One’s lack of support for audio post applications means its ripple editing features will more likely be useful in composing, as well as in editing raw spoken word recordings or any recordings requiring culling.

With standard editing, making a selection and cutting or deleting it leaves open space where that material used to be. Extending the end of an event when there is another event immediately following it results in the stretched event overlapping the following event. Ripple editing avoids both of these results by moving the following material in response to the edit: deleting material causes the material after it to move earlier in time to fill the gap, while extending an event causes the material following to slide later in time by the same amount. This is not always the editing model you need, but when it is, it can save a huge amount of manual work.

Let’s go back to narration, last month’s focus, as an example. Say we are working on a single track of narration, which was recorded continuously. Even a good reader is likely to have a few stumbles, or decide to re-read a few words, and there are any number of events that create unwanted material: throat clearing, coughing, making comments to the engineer or director, rustling paper, movement in a seat, drinking water or tea, and so on. Removing such garbage bits using standard editing leaves gaps between the remaining narration events, which need to be closed up manually.

Ripple editing, by contrast, automatically tightens the track up as you get rid of each noise. This is helpful when editing a 30-second spot, but completely essential when editing, say, an audio book, where one file may represent pages of text. In the end, you probably will have to move some events around individually to get the flow right, but it is much less work without gaps everywhere throughout.

The Ripple Edit button in the toolbar.This simple example of ripple editing turns out to be as easy to execute as one would hope. Click the Ripple Edit button in the toolbar to engage ripple edit mode, then select and delete material as desired. All the material following the edit on the tracks moves along in time to compensate. Move on to the next unwanted bit and repeat.

Note that you must actually paste the new material for this to work: even with ripple editing enabled, dragging and dropping material at the desired location does not result in a ripple edit. Other methods that do not produce rippling include nudging, the Move to Cursor and Move to Origin commands in the Edit menu, and the Quantize on Track command. Attempting to use these commands with ripple editing enabled can produce unpredictable results, and undoing the edit may not return the affected events to their previous locations. I did a few experiments where I performed a command, then undid and redid it multiple times. The results got pretty crazy. (Hopefully, nudging and the Move to Cursor command, at the very least, might get integrated with ripple editing in a future update.)

On the other hand, when ripple editing is active, the Duplicate command does perform a ripple edit, moving succeeding material later to accommodate the duplicated event. Thus, Duplicate acts as an insert with rippling.

The Insert Silence and Delete Time commands inherently produce ripple edits, whether or not ripple editing is enabled. One other ripple-ish function to mention is arranger sections. Click on a section in the arranger track, copy it, place the cursor at an insertion point and paste, and Studio One inserts the section and ripples everything after, whether or not ripple editing is enabled. However, if you select that same section and delete, it merely deletes the section from the arranger track; the data in the audio and instrument tracks are unaffected. 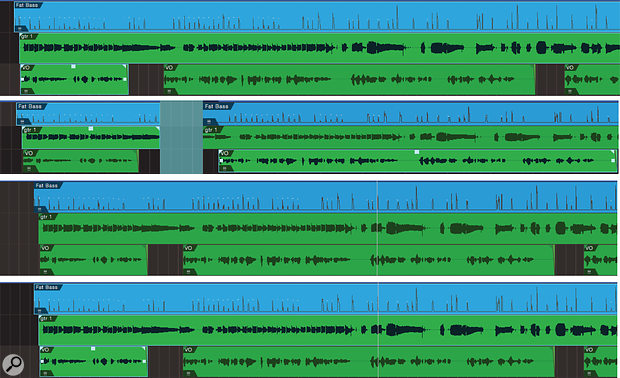 Screen 2: Working across multiple tracks. At the top is the ‘before’: three unmodified tracks. Just below that, a selection was made just in front of the second event in the bottom track and extended across all three tracks, then Insert Silence was invoked, creating a break in the event on the top track. In the third example, a selection was made across all tracks before the first event and Insert Silence invoked. The edit on the bottom was made by turning ripple editing on, selecting the first event on each track, and dragging. As you can see, the results on the bottom two examples are identical.

Ripple editing never affects material earlier than the edit point. For example, if you edit the leading edge of an event, rather than altering the material before the edit point, Studio One slides the material after it later to make room for the new material exposed at the front of the event.

Ripple editing is useful for more than spoken word, of course. When I am writing music, one thing I do is put Studio One in record and noodle around or try out multiple ideas, either against a looping beat or bass line, or just solo. I can then use ripple editing to sort the wheat from the chaff. 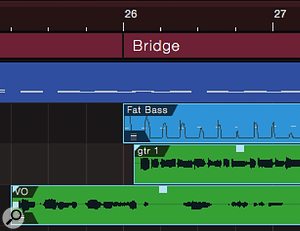 Screen 3a: Ripple editing multiple tracks with snap. At the top we see three beats of vocal (VO) pickup, then bass and guitar enter, bass right on the beat, guitar a little later.When ripple editing musical material, it can be valuable to enable snapping to the grid, to ensure that edited material stays locked to the beat. For this to work properly, at least some of the events getting moved need to start on a grid value.

In Screen 3a, a verse starts with a three-beat vocal pickup before the band enters on the downbeat. We want to add two more bars before the bridge for a few vocal whoops and shouts of ‘Hey!’ The drums are steady throughout and don’t need to be moved, but vocals, bass and guitar do. Of these, the vocals might not fall exactly on the beat, and the guitar might have some bends or other figures that make it a less-than-reliable rhythm reference. Plus, neither the guitar nor vocal events start right on a beat. But the bass is solid on the beat, so we use that as our reference. Type ‘N’ to turn snap on, set the Quantize value to a whole note and engage ripple edit. Shift-click the first events you want to move on the vocal, guitar and bass tracks. 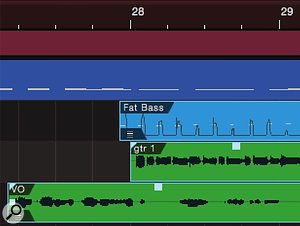 Screen 3b: Here, we have ripple edited by selecting on all three tracks and dragging the guitar event by two bars. Note that the guitar event now starts on the beat, but the bass is a little early.You might think that you could drag any of the selected events and that all of the selected events and following events on those tracks would move exactly one bar. But look at the example in Screen 3b and you will see what happens when we drag an event that did not originally start on a downbeat — in this case, the selected guitar track event. After dragging, the start of that event lines up to the next grid line, which is a downbeat. The bass and vocal tracks have been moved, but not by exactly one bar. This is why the fact these tracks are not reliable rhythm references is important. 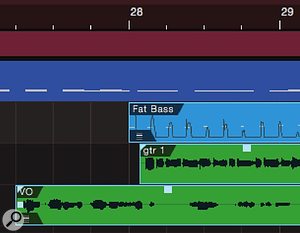 Screen 3c: And in this example, we’ve done the same thing but dragged the bass event instead and all is well.However, if we drag the event on the bass track, which does start on a downbeat, then everything moves one bar and is placed correctly (Screen 3c). The moral of this story is: when ripple editing with snap enabled, choose carefully which event you actually drag.

The ripple edit feature is Studio One’s single biggest tool for this kind of editing, but it turns out quite a few other features provide similar or related functionality. Some kinds of work only very occasionally call for ripple editing, but when it is needed, it can provide significant impact.