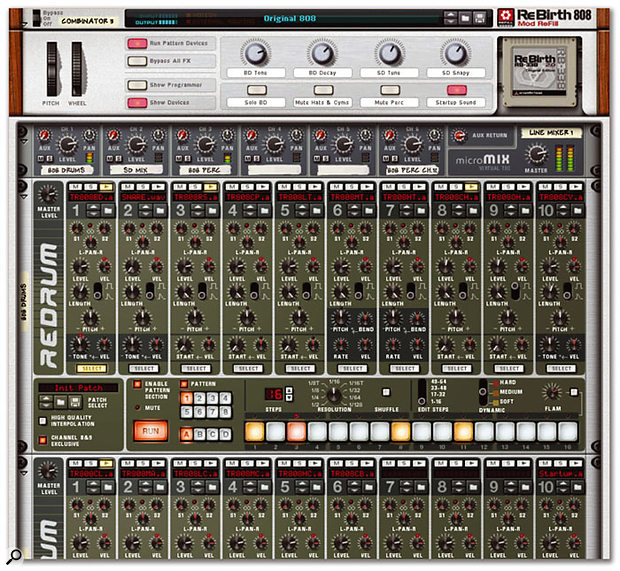 Propellerhead salute their breakthrough software with the Rebirth Mod Refill.

Rebirth is dead. Long live Rebirth! We discuss the decision to discontinue this pioneering software and discover how Reason users can keep its spirit alive.

It has been said that Propellerhead, for their second product ever, really wanted to release something like Reason. But computers weren't up to the job in 1997, so Rebirth RB338 was their follow-up to Recycle instead. This accurate representation of the classic acid studio — virtual Roland TR808 drum machine and dual TB303 Basslines — was an instant hit, growing a virtual TR909 beatbox with v2.0.

Rebirth, a very early entry into the soft instrument stakes, had quite an eventful life, particularly when inquisitive users discovered how to replace the software's graphics, and even its drum samples. Rather than take umbrage — though they must have been surprised — Propellerhead legitimised this 'mod' culture, releasing an application with v2.0 that allowed anybody to do their own mods.

The 2000 release of Rebirth' s successor, Reason, could have been Rebirth 's death knell. But Propellerhead thoughtfully built a conduit for the software — the Rebirth Input Machine — into their new super studio. Development of Rebirth effectively ceased with v2.0.1, and although some users might like to see the classic software rebuilt for modern times (especially for Mac OS X), Propellerhead have decided that their resources are better deployed on current and future projects.

With regret, therefore, Rebirth has been discontinued.

But all is not lost: discontinued does not mean dead and buried, as it might at other software houses. First, take a trip over to www.rebirthmuseum.com. Here, you'll be able to gen up on the whole story, and download v2.0.1 of the software for free! For Windows users, that effectively means an extra four modules for their Reason setup, since RB338 still runs on that platform. Any Mac users still on Mac OS 9 can also gain this free Rewire-compatible mini-studio.

The download takes the form of a rather large disk image, using the Bit Torrent distribution method. Burn that image to a disk yourself, and you're ready to go. (Mac users can run from the disk image on their desktop.)

This is unsupported software, but the museum offers loads of docs, FAQs and a live message board. The museum also has a lot of 'mods' to download, so you can sample some of that late '90s hacking action. There are apparently some people who have never stopped using Rebirth; they're to be applauded, but they're also to be tempted with a very favourable (but time limited) upgrade path to the latest version of Reason. It might be time to bite, people!

More Rebirth history can be found at the SOS web site (www.soundonsound.com): reviews of v1 and v2 appeared in our August 1997 and November 1998 issues respectively, both available on-line.

If you can't be bothered with running Rebirth, or are glad to be shot of OS9 but still have a soft spot for Rebirth sounds, all is not lost. Propellerhead have 'Refilled' all Rebirth 's drum sounds — and they've included a selection of recreations of kits from the 'mod' community. And the 100MB Rebirth RB338 Mod Refill is free! Go to www.propellerheads.se. Now.

The Combinator device has been used to group together Redrum s, NNXT s, Spider s and other devices to recreate the sound and feel of the various TR808 and TR909 kits. Standard layouts have been used, and Combinator programmer knobs and buttons have been used sensibly and consistently to provide instant access to important parameters.

Needless to say, most of the mod kits don't sound anything at all like an 808 or 909, but they've been recreated as accurately as possible, to behave as if they were loaded into Rebirth. And this isn't just a patch collection, as all the samples are, obviously, available for your use too. Be aware, though, that this collection follows Rebirth 's sample-naming conventions. No matter what the sample is that's meant to go in a particular slot, it still has to have the same name as the sample it replaces. So, for example, a sample meant for the TR808 bass-drum slot in Rebirth will still be called TR808BD, even in this Refill. That's the case even if the replacement is a loop, synth sound or wibbly noise.

There's only one annoying thing about this collection: every Combis has been supplied with a 'startup sound' that chimes every time it's loaded. This gets old pretty quickly. It can be disabled but will only stay disabled in future if you re-save the Combi.

However, that's a pretty minor quibble for a fabulous collection that costs precisely zero pounds. There's even a 13-page PDF manual, in the full Propellerhead house style, that goes into lots of detail about how the Combis have been programmed and offers backgrounders on the modders whose work you're enjoying.

Reason On The Up

You might recall that last month's overview of Propellerhead's beta-testing process mentioned that the recent v3.0.3 update was about to be superseded. We can now confirm that version 3.0.4, which fixes various small but significant issues, is ready for download.

It's also worth noting that Reload, Propellerhead's free (to registered users) Akai S1000/S3000 sample conversion utility, has been upgraded. There were, apparently, some 'compatibility issues' with Reason 3, and these have been addressed in Reload v1.0.1.