The ability to sync delay times and other Studio One parameters to tempo is a fertile source of inspiration.

Since the days when analogue modular synths ruled the earth and looping literally meant a large loop of recording tape travelling around a couple of mic stands, I have liked to play rhythmic games with repeating echoes. While early digital loopers such as the Lexicon PCM42 (developed by looping pioneer Gary Hall) made it possible to perform using long, recirculating echoes, the biggest step forward of all has to be tempo‑sync'ed delay plug‑ins. Virtual instruments have sprouted a variety of tempo‑locked functions as well, so life is good for surging, churning, looping rhythmania. Studio One is fully equipped to take you there.

An excellent way to build a rhythmic 'environment' is to create a system that is capable of producing complex rhythms, but also offers a number of parameters that can generate wide variations. Then you play. The result might be a good composition, capturing some new loops, or even a new idea about rhythm. Playing an instrument into a system like this opens a door to a whole other world. This month's example uses delays with feedback, rather than loop playback, the difference being that loop playback does not decay and feedback delays do, thus keeping the texture evolving.

Studio One's Groove Delay plug‑in is a marvellous place to start a delay outing. Groove Delay has four delay taps, each of which can be set to its own tempo‑sync'ed duration, level, panning, swing and feedback level. Each tap has a duration in beats, where a 'beat' is a user‑selected grid value between a 64th note and a half note. Pretty cool, huh? Oh, but I saved the best for last: each tap has its own resonant multi‑mode filter, so every tap can have a different timbre.

Armed with rhythmic, tonal and spatial parameters, Groove Delay is fully capable of generating a rich texture from a simple part. The first of the audio examples accompanying this article is that simple part: a two‑bar synth riff. I have programmed both spatial motion (with the Phaser) and spectral activity (with filter modulation) in the synth sound itself, which results in variations to the sound as it goes through the delay network. In audio example 2, I added the Groove Delay. 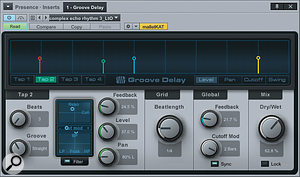 Screen 1: The glorious Groove Delay plug‑in. The graphic section shows tap levels and delays.Screen 1 shows the relative durations and levels of the four taps. There is also panning and filtering on each tap. As you can hear, the result is pretty interesting, and we have barely even gotten started.

Groove Delay alone is big fun, but we want a really potent brew to make the column's point, so I'll add the Presence virtual instrument bundled with Studio One. Presence has at least four tempo‑sync'able features that can impose rhythm on a sound (with the aid of a Sync button, when one is nearby). The LFO in the Mod section can be a tempo‑sync'ed modulator for filter cutoff, oscillator pitch and amplitude. I often add movement to the filter cutoff with the LFO, so that a phrase never sounds exactly the same twice in a row.

The other three sync'able features all reside in Presence's effects section, which is accessed by clicking the Edit FX button to the right of the main display (see screen 2). 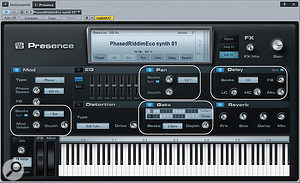 Screen 2: The FX section of the Presence instrument, with tempo‑sync'able sections marked. The Delay section is designed for tempo sync'ing, with available grid divisions ranging from a 64th-note triplet up to four bars! The Gate section provides a 16‑step pattern gate; this really gets interesting when switched to Stereo, where there is a different pattern for each channel. The Pan section is capable of tempo‑sync'ed panning.

Seems like an embarrassment of rhythmic riches, and indeed it is, which brings me to my most important tip: hold back on complexity. True, complexity is what we are seeking, but when you end up with sophisticated rhythms playing simultaneously in different places, the result is usually so complex it's hard to hear musicality in it. Pick one place in which to play with complexity (Groove Delay is a good choice), and make simpler settings on the other tools. The Presence gate pattern shown in the example is pretty simple. Refrain from adding significant feedback on each tap, especially the delay in Presence.

Next tip: set most of your rhythmic tools to longer loops. A quarter‑note delay might sound fine on its own, but with multiple taps, pattern gating, auto‑panning, modulated filtering and other rhythmic mucking about, a short delay will very quickly make an indistinguishable mess out of everything. On the other hand, a two‑ or four‑bar delay might seem too long by itself, but in this context, gives a more musical result. It's like playing in a band: with a number of contributors, each one has to leave some room for the others.

Audio example 3 has four bars of Presence playing the riff through its onboard effects (delay, panning, pattern gate); then the Groove Delay is added and the fun really begins. I didn't change anything while the riff played, aside from taking the Groove Delay out of bypass. It gets better when you play with it.

How do we get music out of a rhythmic system like this? As with almost any kind of composition, the heart of the process is editing. There are numerous parameters that can produce interesting results, and the art is in gaining understanding about manipulating the parameters and shaping that knowledge into something interesting.

Physical controllers are particularly useful in interacting with systems like this (see screen 3). 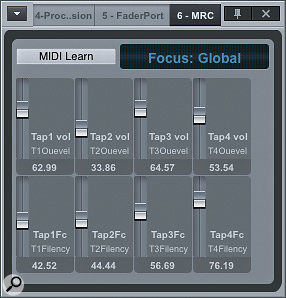 Screen 3: This controller maps eight faders from a Lexicon MRC to control tap levels and filter cutoffs Studio One Exchange has extensions for Native Instruments Maschine and Novation's Remote SL controllers, and Studio One's Control Link lets you link other controllers to parameters and scale their control ranges quickly.

An important characteristic of delay networks like this is, well, delay. That is, when you make a change in the system, you may hear an immediate alteration, or its effect might seem delayed, depending on how the delays are set up. With delay feedback, the change continues to propagate through the system for a while before everything stabilises again. So changing a setting is not an isolated action: it is a gesture of some duration. Here are some key parameters of the Groove Delay to play with in the system we have set up:

Here are the key settings on Presence:

Screen 4: The X/Y controllers in the Groove Delay allow control of a delay tap's filtering.

Tempo sync'ing delays and processing is fun, interesting, and useful. Things can get pretty sophisticated when you get a few different processes going, but there is great stuff to be had using only one tempo‑sync'ed process.

Surf to /sos/sep14/articles/s1media.htm to hear the audio examples accompanying this month's workshop.