From de-essing to complex drum processing, side-chain access in Studio One opens up many new possibilities.

Many software dynamics plug-ins, not to mention a great many hardware processors, allow manipulation of the side-chain signal. This is the portion of the control signal path that feeds the level detector, which controls the gain element, triggering compression, gating or what have you. Probably the most familiar example of side-chain processing is de-essing, in which an EQ is inserted in the side-chain of a compressor to emphasise energy in the sibilance frequency range, making the compressor more reactive to sibilant words. However, there are many other applications for side-chaining, including cross-gating (where a kick drum can gate the notes on a bass guitar, for instance) and ducking. This month, I'm going to show you a few side-chain applications using Studio One's bundled Compressor, Gate and Expander plug-ins.

Where the signal fed to a compressor contains a lot of low-frequency content, this can produce exaggerated gain changes in the wide-band audio, a sound described as 'pumping'. This can be particularly annoying on synthesized sounds with a lot of low-frequency content. One simple remedy is to flip de-essing on its head: instead of making the compressor more sensitive to high-frequency content, we insert an EQ with a low-frequency roll-off or dip to make the compressor less sensitive to low frequencies, thus reducing pumping. Figure 1b shows how this works. The easiest way to set this up is to use the side-chain filtering built into plug-ins such as Studio One's Compressor; however, it is also possible to route a signal bound for a side-chain through a bus channel with an EQ plug-in inserted on it. 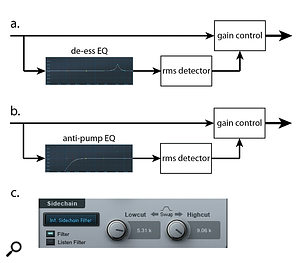 Figure 1: a) Basic de-essing setup, b) pumping caused by low-frequency energy can be reduced with a high-pass EQ in the side-chain, c) the Compressor plug-in's onboard side-chain EQ section.

'Ducking' is the name given to a technique where a compressor across one signal is triggered from another, thus diminishing its level only when the second signal is playing. Radio and TV ads often use pretty brutal ducking to get music out of the way of the announcer's voice, for instance. Ducking also has a role in music mixing, albeit usually with much smaller amounts of gain reduction. For example, having the lead vocal duck a reverb or delay tail just 1 or 2 dB can impart much more clarity to the vocal without sacrificing the effect of the reverb or delay. Figure 2 shows the Compressor plug-in set up to duck a heavy guitar track a tad when the lead vocalist is singing. 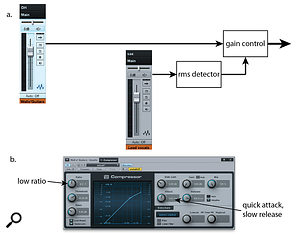 Figure 2: a) Basic ducking for music: a lead vocal channel feeds the side-chain of a compressor on a guitar submix, b) a typical Compressor setting for music ducking. Note that the Expander plug-in can also be used for ducking when the Duck button is selected.

For somewhat more sophisticated ducking application, let's consider a band where each musician takes a solo in turn, and at the mix, we want each soloist to duck some or all of the other instruments. Accomplishing this requires two things: sending each soloist's signal to the side-chain at the appropriate time, and keeping the soloist from being one of the ducked tracks. Both goals can be attained if we use a bus channel to feed the side-chain, and have submixes of the instruments we want to duck. Let's say we want to bring out a guitar solo that is being supported by keyboards, a rhythm guitar, background vocalists, bass and drums, and which is followed by a keyboard solo.

At the mix, you'll sometimes want to use effects on solo sections that aren't used on the same instrument in the rest of the song, and there are several ways effects can be handled here. One is that they can be inserted on the solo instrument's channel and bypassed, then automated to kick out of bypass just for the solo. That way, the sound being sent to the Solos channel is always the complete sound for the instrument. Alternatively, effects can be inserted on the Solos channel and automated in and out. Yet another method is to use sends from the solo instrument channels to bus channels on which the effects are inserted, with the bus channel outputs routed to the Solos channel or directly to Main Out.

I've already mentioned the basic 'kick triggers gate on bass' application for cross-gating, so now I'm going to give you something a little more interesting to chew on: an intriguing mashup of cross-gating and drum replacement intended to enhance an existing track. It's kind of like velocity layering in samplers, adapted for recorded tracks. First, pick a recorded track to enhance. For the purposes of learning this trick, try something transient and dynamic, like a snare drum.

Figure 4: Signal flow for volume-triggered enhancement.The submix at the end is not required, but makes things easy. 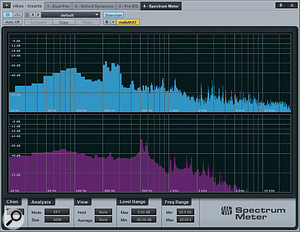 Figure 5: The Pro EQ and Spectrum Meter plug-ins can provide side-by-side spectral analyses for comparing two signals. One signal is the channel on which the EQ is instantiated, the other enters through the side-chain input.

I will leave you this month with one last interesting side-chain application Studio One offers. If you send a signal from a channel to the side-chain of a Pro EQ or Spectrum Meter plug-in instantiated on another channel, the plug-in will display spectral analyses of both signals, one above the other, making comparisons a snap. (Pro EQ must have its Spectrum mode set to FFT Curve to see both analyses.)

These audio examples illustrate the side-chained drum triggering effect describe in January 2014's Studio One workshop. Audio example 1a is the snare track soloed. In audio example 1b, triggered effects are added. I set the gate threshold low enough to trigger from some of the hat and tom leakage, too, yielding a more complex rhythm.