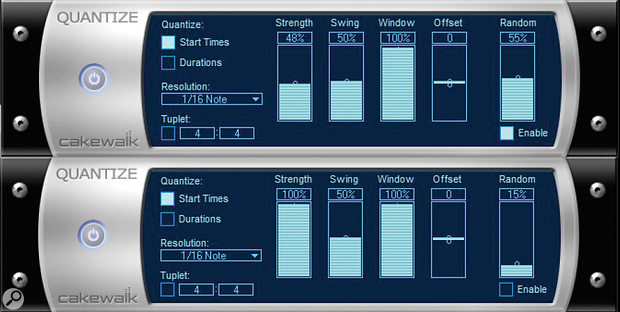 Use two Quantize MIDI plug-ins in series to create variations in a drum part that go beyond changes in quantisation strength or velocity.

Add a human element to your drum parts with Sonar’s various quantising options.

The big news is that, in a 23rd February news release, the Cakewalk home page (www.cakewalk.com) said that: “BandLab Technologies today announced the acquisition of certain assets and the complete set of intellectual property of Cakewalk Inc from Gibson Brands.” By the time this issue hits the streets we’ll probably know the details, but presently we do know that while Sonar will no longer be called Sonar (apparently due to legal reasons), it will retain its incarnation as a desktop application, and both Noel Borthwick and Ben Staton have been retained from the engineering team. Stay tuned — as Yoda once said: “Always in motion is the future.” [Stop Press: Cakewalk by BandLab news.]

Meanwhile, let’s cover ways to get off the grid and ‘humanise’ performances in Sonar, for both MIDI and audio.

The Quantize MIDI plug-in is one way to get off the grid, because unlike the Quantize edit menu, you can adjust Strength, Swing, and Random in real time to hear how edits affect the track. This makes it easy to set the minimum quantisation strength needed to make notes sound ‘correct’. I highly recommend adding a bit of swing — even 52 or 53 percent can make a subtle difference that gives a sequence more life.

The plug-in has a random option, which is not available in the Quantize Edit menu. Although I’m generally not a fan of ‘humanisation by randomness’ because it tends to sound artificial (humans don’t really make random mistakes, they intend to play something but don’t get it quite right), some low values here can help out. Use the Enable button to decide whether the added randomness is an improvement.

The Quantize MIDI effect can add interest by introducing variations in the part itself, not just an attribute of the part like start time or velocity. Insert two Quantize MIDI plug-ins in series (see screenshot above), which we’ll call Quantize 1, followed by Quantize 2. Use Quantize 2 to quantise the unquantised drum track — for example, 16th notes with 90-percent strength and 51-percent swing. Quantize 1’s role is to randomise start times; normally this wouldn’t be helpful, but because Quantize 2 is quantising the results, it will tame the randomness and pull the outliers back into the grid — sometimes to a different place than when they started, which is what alters the part.

Because this is a random process, if something great happens there’s no way to re-capture it. If you want to add variations to a loop, I recommend testing the settings above on one or two iterations of the loop. If it sounds close to what you want, roll the loop out to a really long series of loops, then use Process / Apply Effect / MIDI Effects. Save the parts you like, and discard the rest. If you don’t like any of the variations, just hit redo, make a few changes, and try again. And of course, you can still use Quantize 2 to modify the riff even further with randomness or swing.

Get Into The Groove

There are many aspects to Sonar’s Groove Quantize function, but I think the advent of Melodyne has made some of the pre-Melodyne options obsolete. So while I may not be using Groove Quantize as expected, the following works well.

As mentioned in previous columns, my go-to acoustic drum loop libraries are the Discrete Drum series, distributed by Sonoma Wireworks. These are multitrack drum libraries, so you can extract grooves for individual drums. As an example of how the Groove Quantize process works, when doing dance music I’ll often lay down kick, snare and clap loops for an EDM track and quantise them right on the beat. But then when I bring over a 16th-note electronic hi-hat loop, it sounds overly mechanical, so I’d rather have the hi-hat pattern from a Discrete Drums audio track — but with the electronic sound of the loop.

The first step is to extract the MIDI data from the acoustic hi-hat part. It’s easy — create a MIDI track, then drag the audio loop into it. After Melodyne has analysed the track, you’ll see what appears to be a single MIDI note. This is because each note end extends to the beginning of the next note, even if there are silent parts in the audio track. To see the individual notes more easily, select the MIDI notes, choose Process / Length, and change Durations to 50 percent or so. Click on the clip to select it, then copy it.

Next, click on the audio track you want to quantise to the extracted MIDI data. Choose Process / Groove Quantize. The Groove File will default to the Clipboard, which contains the copied MIDI data. You now need to specify how to apply this MIDI data. Most of the time the defaults are what you want, so you can just click on OK and be done with it. However, if you want to modify the settings, here’s how.

The first consideration is how to handle notes that fall outside the Window parameter, which sets how far away from the grid Sonar will look for notes to quantise. For the kind of work I do with drums, usually I want to groove quantise all the notes so I leave this at 100 percent. However, for other instruments or situations you may want to have the groove affect only those notes that are within a certain distance from the grid. The choices from the drop-down menu If Outside Window determine what happens with these notes: leave them alone, quantise them to the grid, quantise to the nearest groove event, or choose the enigmatically named Scale Time, which spaces all notes outside the window evenly (and for which I have yet to find a use). 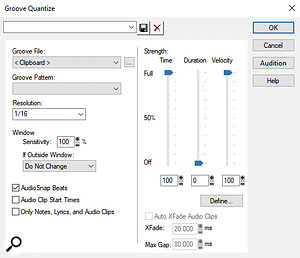 You can determine the extent to which Groove Quantize affects audio or MIDI parts.Finally, set the strength (ie. the extent to which the Groove Quantize data affects the target file). You’ll usually leave Time and Velocity up full because you want the timing and levels to reflect the Groove Clip data. Setting Duration to 0 is a good idea because the duration is artificial anyway after shortening the notes to be visible. After setting these parameter values, click OK and you’re done.

Note that it’s not necessary to set the Edit Filter to Transients, or open the AudioSnap palette in the target track — if you have the desired MIDI data in the clipboard, the Groove Quantize function is all you need. Furthermore, you can apply this technique to MIDI tracks, not just audio. Simply select the target MIDI track and then choose Process / Groove Quantize.

It takes a little effort to take full advantage of the step sequencer’s attributes, but the results are worth it: you can use the step sequencer to put beats together quickly, then tweak the pattern later to improve it.

The Step Sequencer has several features that can add interest to your patterns.Click the arrow at the header’s left to unfold a row’s control section. Choose Velocity from the drop-down menu to adjust the velocity of individual steps (for example if you’re working with a drum pattern, you might want to accent hits that fall on the beat, and de-emphasise those that don’t). The Velocity knob provides a ‘master’ velocity control. This is also where you’ll find swing; small values can animate a part with a bit of a groove, but won’t be enough to conflict with other parts that are quantised.

The Time control moves the sound associated with the row. Negative numbers move all notes ahead of the beat, while positive numbers lag the beat. To offset individual notes by drawing the desired amount of offset, choose Time Offset from the drop-down menu.

Step Play Probability, the remaining drop-down menu choice, can humanise patterns by dropping out notes occasionally. Although you might not want a kick or snare doing that, with percussion (tambourine, shaker, etc.) the variety this creates can lead to a far more interesting part.

Right-clicking on a row’s header offers several options including the Velocity Multiplier, which compresses velocity with values under 1 (meaning it reduces differences among velocities), and expands velocity with values over 1 to create greater differences. It’s the data equivalent of compression and expansion. The Velocity knob can raise overall velocity if compressing the data reduces peaks too much, and lower velocity if expansion went too far.

So, no, sequenced music doesn’t have to be mechanical — try some of these techniques, and you may find that snapping to the grid isn’t always the best option!