Learning how to use Studio One’s templates can make a massive difference to your efficiency.

The usefulness of templates is quite rightly emphasised in discussions of recording and production in a DAW. A template can define a strategy for how a session will flow. Understand this, and the boring drudgery of configuring a template becomes nothing less than the laying of a foundation on which all that you create will be built.

As there are many working styles, there are many approaches to creating templates. This month I will take a look at one of my band recording templates and focus on the thinking behind its configuration. I’ll also share a few tricks particular to Studio One’s abilities. 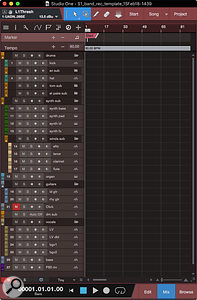 Screen 1: Band mixing template. This shows all of the tracks in the template and how they are organised into folders and colour-coded.The template in Screen 1 is for recording your garden-variety pop and rock band (although we can hope for better). The first, and possibly most important, thing to notice is that tracks are organised. In my view, grouping, submixing, track organisation and other such dreary impositions of conformity are perhaps the most important aspects of organisation in session design and layout.

In this template, related tracks are packed into folders, which correspond closely (though not always exactly) to the primary bus channel submixes: drums, synths, guitars and vocals. There is only one bass track here; in a real session, often there will be more than one (DI and amp, for instance), in which case the tracks are packed in a folder and the tracks routed to a bass submix bus channel. There are lower-level submixes nested inside some submixes: drum tracks feed snare, tom and stereo pairs submixes, all of which feed the drum submix.

Why so many submixes? There are several good reasons. First, it provides a useful level of granularity in between adjusting each and every track individually and only having control over the balance of a small number of submixes, each containing large numbers of tracks. Second, submixing presents the ability to do bus processing. Third, there are a few simple methods for bouncing each submix out to its own file, ie. making them into stems. (A ‘stem’, as traditionally defined, is simply a submix that has been ‘printed’ to a file.)

Screen 2: There are four cue mixes in this template. They serve as group returns when monitor mixing is done in the audio interface, and as musician mixes when low-latency native monitor mixing is used.There are more types of submixes in a template like this, of course, such as monitor mixes and effects sends. I have three MOTU AVB interfaces with onboard mixing, meaning there are a fair number of gazintas and gazoutas routing around. This often makes it most convenient for me to do monitor mixing in the interface. When I do that, the four cue mixes shown in Screen 2 are used as group returns I can route to the interface mixer and create separate mixes there for the musicians. On occasions when I use native low-latency monitoring in Studio One instead of mixing in the interface, the same cue mixes get used instead as individual mixes for the musicians.

All of this submixing stuff also affects how effects are routed and used. Many people place a few generic effects such as delay, chorus and reverb down at one end of their mixer in a template, then route whatever signals to them need those effects, and the effects to the main mix.

This is one of the aspects in which Studio One’s configuration changed the way I work. The ease with which I can drag a preset from the browser, drop it in the sends area of a channel, and have everything automagically instantiate and route appropriately pretty much eliminates the labour that used to justify having generic effects set up in a template. As a result, I have only two or three effects set up in my template: usually a reverb for snare, delay or multi-effects for lead guitar, and my one ‘generic’ effect, a reverb I just call ‘houseverb’ and use mostly for whatever needs to get blended together in the same space.

Once I find a good balance between snare and reverb or lead guitar and delay, I prefer to leave that balance alone. This suggests routing dedicated effects not directly to the main mix, but through the submix of the sources that are feeding them, so the snare reverb is routed to the snare submix, and the guitar delay to the guitar submix.

Since this template is optimised for mixing, I have deselected the options for keeping effects channels or bus channels to the right, allowing me to lay the console out any way I like. For instance, I have the drum sub to the right, but lower-level subs such as the snare and toms placed near their source channels to the left. 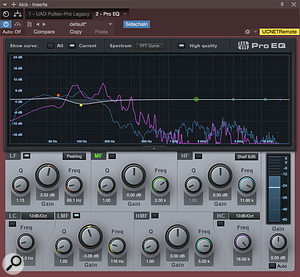 Screen 3: Studio One’s Pro EQ plug-in can overlay an FFT of a signal sent to its side-chain input on the FFT of the channel signal. Here, it is clear that the kick drum and bass both have a good bit of 100Hz energy, so a little EQ is applied to ease the masking a bit.There are two other routing issues in the template to discuss. The first is a nice trick that Studio One’s Pro EQ plug-in keeps up its sleeve. The plug-in has a built-in FFT analyser, but if you feed a different signal into the EQ’s side-chain, it will impose the FFT of the second signal on top of the channel signal FFT. In Screen 3, the bass channel has been routed to the kick EQ’s side-chain in the channel sends section, so the bass response is superimposed over the kick. This shows that the two are colliding in the 100Hz area, so a bit of EQ has been applied to the kick to reduce this overlap.

One other technique I use a lot is ducking, which can be subtle or blatant depending on context. For lead guitar effects, for example, I like to apply a compressor with a pretty high ratio and low threshold to get those gloriously long decay tails out of the way while the guitar itself is sounding. But I am subtle when I route all of the instruments through one master group I call ‘music sub’; the point is to let me add a compressor on the music sub channel and route the vocal sub to its side-chain so that a small amount of ducking, typically 1dB or so, is applied to the entire instrumental mix when the vocal is happening.

Many users’ templates have EQ and compression on every channel. I don’t bother with the former, as I usually choose an EQ plug-in based on which one I think will work the best for what I’m doing at that moment, so putting the same EQ on every channel in a template is likely to result in my changing most of them out in the actual mix. I do, however, have lots of compressors in the template. I use compressors all over the place, almost all of them doing just a few dB at most, including the duckers. Drum overheads frequently need a de-esser to soften the cymbals; in this template I use the Sonnox SuprEssor because it is particularly versatile and sounds quite good, but the multiband compressor bundled with Studio One Professional works fine for frequency-selective compression, too.

There’s one more organisational feature I want to point out in this template, and that is the console scenes. Templates can be large, since the idea is to accommodate a lot of possibilities, but work is often focused on a much smaller subset of channels at any given time. Console scenes make it easier to focus on a subset, so it is valuable to set those up in your template. The likelihood is strong you will need to store new scenes and delete old ones in the course of a project, but having them in the template speeds up the mix process right from the beginning.

Screen 4: Console scenes can make it lightning fast to jump around and make changes, while retaining visual clarity. However, Studio One only makes provision for key shortcuts for the first five scenes.In Screen 4, you can see that there are six scenes in this template. Hear that buzzing? That’s the fly that’s about to land in your ointment. You see, the good news is that you can recall console scenes (and, for that matter, track scenes in the Arrange window) with key shortcuts. The bad news is you can only recall the first five scenes you change, so my sixth scene is recallable only from the menu, which, truthfully, isn’t horribly difficult… but it is slower than a key shortcut.

Template construction must balance the visual and the functional, as the two sometimes do not align. They also must balance anticipation of the possible against optimisation for the likely. It is important to use structures like folders, groups, and color-coding to keep your template organised. Understand how clever features, such as Studio One’s EQ side-chain trick, can contribute to your template. And, most of all, once you’ve had to add the same feature to three song documents, it’s time to add it to a template! 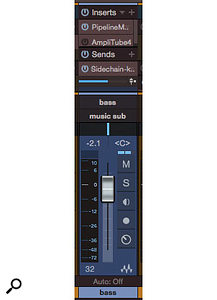 Screen 5: There are several things to notice on the bass channel. First, the Pipeline plug-in, which inserts an outboard Dbx 160 compressor. Second is the AmpliTube plug-in, which is needed often enough to justify having it on tap. Finally, the side-chain send, which is to the kick-drum channel’s Pro EQ to overlay the bass’s FFT on the kick drum’s.I have a fair amount of outboard gear that I use both in recording and mixing. In recording, most of the processing I’m using is in the analogue signal chain before it ever reaches Studio One. Mixing, however, entails sending and receiving from analogue and digital processing. My template, therefore, needs to accommodate outboard for mixing, but not really recording.

Analogue compressors often get inserted in-line using the Pipeline plug-in; you can see in Screen 5 that the template has a Pipeline insert on the bass for my Dbx 160; there is one on the snare channel for my Empirical Labs Distressor, as well. Analog patching and interface routing must be done to support these arrangements. Effects processors, such as the Lexicon PCM80 included in this template, require an output for the send and a stereo audio channel to capture the return.