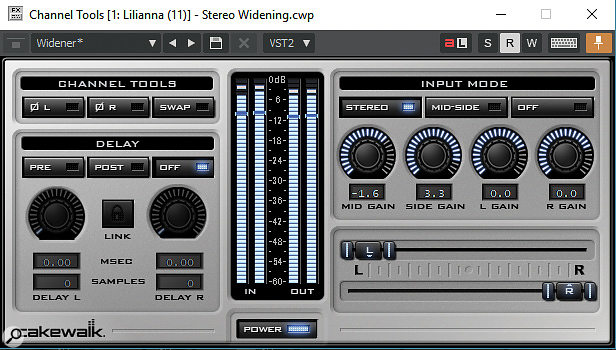 With Channel Tools set to Stereo mode, increasing the Side Gain control and turning down the Mid Gain accentuates the width of the stereo image.

Increase the stereo width of your tracks with Mid-Sides processing in Sonar.

As a write this, there’s been some exciting news: Sonar has been reborn as the free program Cakewalk by BandLab. It’s essentially Sonar Platinum, but without third-party add-ons that involved licensing (no Melodyne, Nomad Factory, and so on). It’s also 64-bit only, so 32-bit DX plug-ins will have no platform they can run on in the future. However, you can continue to run either the 32- or 64-bit version of Sonar, it simply won’t be updated any more. Also, the extras that were part of Platinum will continue to work in Cakewalk — if you had Melodyne Essential before, you still have it now.

Several details are yet to be worked out, and some questions remain, but the important takeaway is that Cakewalk is back, this time as a free program.

Anyway, to the subject at hand. Stereo audio can take two forms: either multiple mono tracks panned somewhere between the left and right channels, or ‘true stereo’ tracks, which are stereo recordings of a single performance captured using two or more mics. In either case, stereo audio has hidden complexities you can reveal with Mid-Sides processing, whichever form of ‘stereo’ you’re dealing with, so let’s look at some of the ways Sonar can get creative with stereo imaging.

Your Width Is My Command

There are many reasons for wanting a wider stereo image. One is simply because it’s more impressive on headphones, which is becoming (if it hasn’t already) the most prevalent music delivery system. But there are other uses. For example, when mastering, you can widen instruments like distorted guitar to make more apparent room in the centre for vocals. A drum kit can also benefit from stretching out over a wider image, so that its wide frequency range doesn’t collide as much with other instruments.

The Blue Tubes Nomad Stereo Imager ST-25 plug-in that came with Sonar Professional and Platinum, and which still works in Cakewalk, is the most obvious widener. You can narrow the image to mono, or widen it ‘beyond’ the original stereo image. Like most Mid-Sides-based imaging tools, the more you widen the stereo, the more the centre drops out. Although this can enhance stereo, you shouldn’t go too far in the wider direction (not much past 30 to the right of the graphic’s centre) or you may end up losing too much of the Mid signal.

Channel Tools offers more options because it goes beyond the ST-25’s single control. Insert Channel Tools in the stereo track you want to widen, set the input mode to Stereo, and start off with the Mid Gain, Side Gain, L Gain, and R Gain controls at 0.0. Turning up Side Gain raises the levels on what the right and left channels don’t have in common (the Sides or ‘difference’ signal), thus increasing the width and sense of space. The trade-off is that as you increase the level of the Sides, the mono compatibility will suffer, so there’s a definite ‘sweet spot’ that strikes the right balance between width and centre-channel strength. Before signing off on the sound, it’s good practice to listen to the master bus in mono as a reality check; but barring extreme settings, you should be OK.

Also, note that you can automate the Mid Gain and Side Gain levels. This makes it easy to bring up Sides to increase the image, then pull back on it, for different sections of your song, for example.

A Bit On The Sides

Extracting the widening component and processing it separately from the existing track allows for various creative possibilities. The following technique requires a bit more effort, but separates the Sides from the original stereo track and allows you to process them in parallel.

To do this, copy the track you want to process, and add Channel Tools (with Input Mode set to Stereo) to the copy. On that channel, turn the Mid Gain control all the way down. You can now apply processing to the Sides component by inserting effects on the copied channel, after the Stereo Tools plug-in. This should result in a fairly natural sound, as the original stereo information is still present in the unprocessed track. By altering the relative levels of the two tracks, you can determine the overall width along with the level of processing.

Processing the Sides signal can be a lot of fun with acoustic drum recordings. Try adding some reverb or delay after Channel Tools; this is also a situation where you can insert the Blue Tubes ST-25 after Channel Tools, and go nuts with the stereo imaging — you don’t have to be concerned with it thinning out the Mid component, because that is on a separate track. Then, after adding all these goodies, insert the Concrete Limiter in the ProChannel and set it for Post FX Rack (right-click in a blank space in the ProChannel and then select Post FX Rack). This can take dry, boring drum loops and make them sound like they were recorded in the acoustic space of the gods.

Parallel processing the ambience from a drum track is cool, but you can also remove the Sides from the original drum track completely for more radical effects. Mixing only the Mid signal from the original track with the ‘augmented’ Sides mentioned previously gives a great degree of control over these two sonic components. After using this technique with bussed acoustic drums, I think it’s going to become a go-to mixing setup.

Insert Channel Tools in the original drum track from which you extracted the ambience. Set Mid Gain, L Gain, and R Gain to 0.0, and turn Side Gain all the way down. That’s all there is to it. Now all the mono drum elements will be anchored to the centre, with only the copied track containing the Sides. Having these two elements in completely separate tracks can provide some pretty cool effects, along with a lot of versatility.

For example, odds are that the hi-hats on a drum track, being panned quite hard, will be more prominent in the track with the extracted ambience. If you click on the Swap button for that channel’s Channel Tools, you can change the hi-hat from performer perspective to audience perspective, and vice versa.

The L-Phase EQ plug-in also offers Mid-Sides EQ processing, which can help widen a signal in a different way. If we boost the high frequencies in the Sides but leave the centre alone, it gives an illusion of a wider image that can add some sparkle. This will also bring up Sides components like reverb, which can give an even greater sense of a wider image. 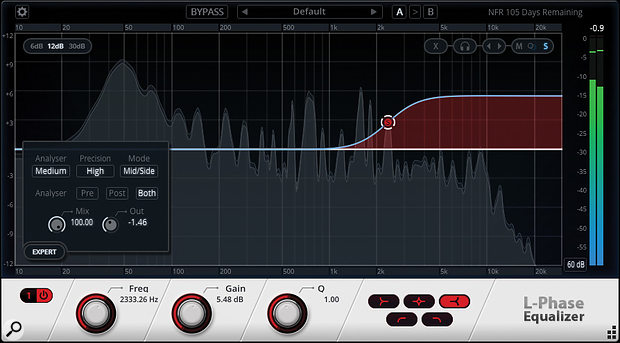 Go into L-Phase EQ’s Expert mode and choose Mid-Sides mode, preferably with High Precision (depending on how well your computer can cope with the extra CPU drain). Add a node for a high-frequency shelf, and then assign it to the Sides from the selector in the frequency response graph’s upper right. You’ll need to give it a fair amount of boost (say, 6dB starting around 2kHz) to make an obvious difference, as the effect is more subtle than the Channel Tools-based options given previously. However, the EQ-based option can be effective in giving just that extra little bit of width in an almost subliminal way, and it can provide other benefits to a stereo mix as well.