Studio One: Future-proof Your Song Archives Skip to main content

Studio One: Future-proof Your Song Archives 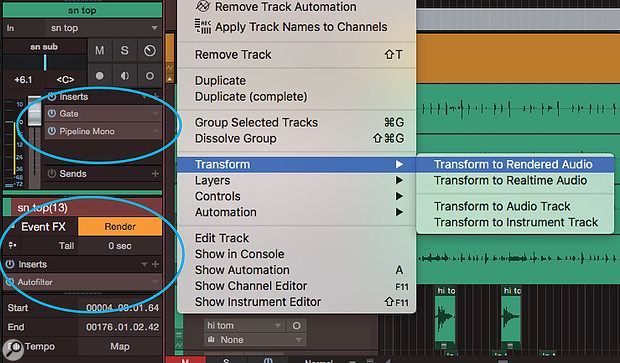 Screen 1: The Track Transform commands are ideal for capturing audio. Here, transforming the track captures both an outboard compressor inserted with the Pipeline plug-in, and Event FX that had not yet been rendered.

Archiving your Studio One Songs in a future-proof format could save your life in years to come.

Fifty years ago, the Doors’ Jim Morrison sang “When the music’s over, turn out the lights,” but Jimbo never had to deal with packing up and backing up his data before he could call it a night. Today, when an album or project is completed, there still remains one more major task, which is making sure the project can be revisited, should that ever be wished. Studio One offers a number of tools to support this effort, so our subject this month is tying everything up with a nice bow.

Before we start our bow-tying, however, I must tell you that your mother called to say that if you haven’t given clear, logical, unique names and colour-coding to all of your tracks and takes and channels, or saved all of the presets from your plug-ins, then you’ll have no one to blame but yourself when you come back in eight months and don’t remember what any of that stuff was. Do what you like; I, for one, am not arguing with Mum.

Having (of course) made Mum happy, we might think we can back up our sessions and source material and be done. But tools, techniques and formats change, and there’s no guarantee that the next person to use your data will even be using the same DAW you did, let alone that they will have all of the same plug-ins and outboard equipment. It is not valid to assume that years in the future you will be able to open a session and do more work in it — and if you can’t open the session document, all of your editing, mixing and automation moves are gone.

So, simply backing up or archiving sessions and source data is not enough to guarantee you’ll be able to remix or remaster material in the future. By contrast, though, in the future you will almost certainly still be able to access audio files in standard uncompressed formats such as WAV. So, while you absolutely should back up and archive all of your sessions and source data, it is a good idea to plan on also generating a set of audio files that represent the core elements of your mix.

I’ll start all the way down at the bottom of our audio information hierarchy, which is capture. The moment the mix is finished, when all of your outboard gear, plug-ins and virtual instruments are in place, with everything properly set up, is the time to capture the audio from these items. If you don’t, you might easily find yourself unable to replicate later the way your mix sounds now. Capture audio for every source in the song document and you will always have at least that to work with. Usually, you can maintain the original MIDI or other session data as well, and who knows, everything might still run fine the next time you open this song document. But better safe than sorry.

Capturing audio is where Studio One’s Track Transform commands really come into their own. Tracks using the Pipeline plug-in should be transformed to rendered audio, instrument tracks should be transformed to audio (or rendered audio, if you have plug-ins on the instrument’s audio channel). Event FX should be rendered, too, and returns from outboard instruments or send effects should be recorded onto audio tracks (see Screen 1, above). Do not underestimate how long it can take to do all of this capturing if you have much in the way of outboard gear or virtual instruments. Your 500-series rack may be your friend, but sometimes friends need some of your time.

Your project audio data can be usefully viewed as existing at three levels, any and all of which may be worth backing up. The top level is the final stereo mix files, the next level down is stems, and the lowest level is tracks. You may not need to preserve everything at all levels, and indeed, it can be an onerous task to do so. An appropriate decision about the level of detail that needs to be preserved is crucial.

Stereo mix files are the easiest to make and preserve, but offer the least flexibility for later use. The only way to change anything about stereo mix files after the fact is to bring them into a Project in Studio One and master them. You can beef up the low end of the entire mix next year, but bringing the floor tom out a bit more will be pretty tough.

A popular tactic for reserving some flexibility is to export a number of mix variations (vocal up/down, snare up/down and so on), especially if only stereo mix files will be kept. The Song / Export Mixdown command is likely to be your exclusive method of generating final stereo mixes.

Stems are simply submixes that have been written to a file. Their use originates in film post-production, but the late Phil Ramone was a great pioneer of stem mixing for music. Stem mixing keeps the quantity of mix elements to a manageable number and track count, while still allowing for some degree of finesse in mix tweaks. 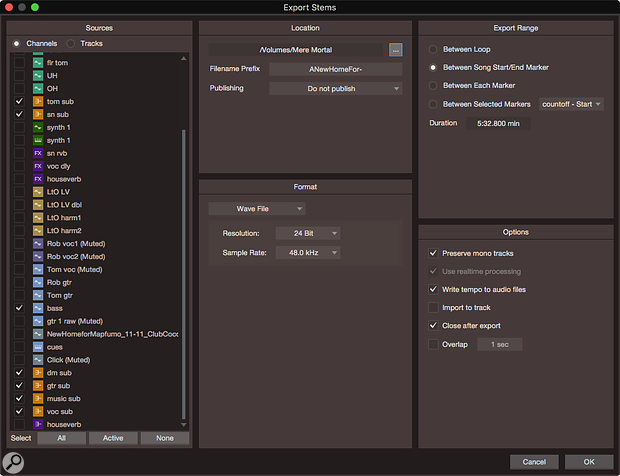 Screen 2: The Export Stems dialogue. I have deselected everything and then reselected my submixes (colour-coded orange), which will become my stem exports. Note the ‘music sub’ stem, a redundancy I do because that submix is ducked by the vocals.

Stem mixing does incur the expense of dealing with more files and complexity, and people vary in their views of the optimal number of stems. At one end of the spectrum, you might have two stems: vocals and everything else. At the other end you might have lots of group submix stems (horns, keys, guitars and so on), along with some key elements broken out into their own stems, like lead vocal, snare and kick. When you try stem mixing, pay attention to what ends up being useful or not, and you will quickly find your own level of detail. If you submix a lot during mixing, as I do, you’re already halfway to stem mixing.

There are several methods for generating stems in Studio One, but I will discuss the most obvious: the Export Stems command. The command actually exports any selection of tracks and channels in the song to individual files, and all are selected for export by default, so to export only actual submix stems, it is fastest to deselect everything and then reselect only the channels you want. Click the None button at the bottom of both the channels and tracks tabs in the Export Stems dialogue to deselect everything. Then go to the channels tab, select the submixes (bus channels) you want to export as stems, and go, cat, go (Screen 2). 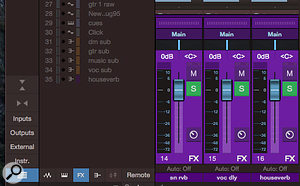 Screen 3: Disengage all of the view toggle buttons below the track list, and click the FX button to activate it, and your FX channels will immediately be right in front of you for muting or soloing during your export process.Export Stems is an automated solo-bounce process, so it captures the track exactly as it plays, including any real-time Event FX (that is, those that have not already been rendered). To break out one or more elements, just select the tracks and/or channels you want to break out in the Export Stems dialogue, along with the desired submix bus channels. Then be sure to remove the breakout elements from any of the submixes as well (or you won’t be fully breaking them out).

Reverbs and effects are often worth breaking out to their own stems, as well. If you use FX channels for effects, you can isolate and access them quickly by switching off all of the other view toggles at the bottom left of the mix window (Screen 3).

Another approach to stem mixing is to set up a template session from the beginning that has an output for each stem submix. While recording and overdubbing, these outputs can be used as cue mix elements; then, when mixing, the Export Mixdown dialogue can be invoked and each output written out in turn as a stem (Screen 4). 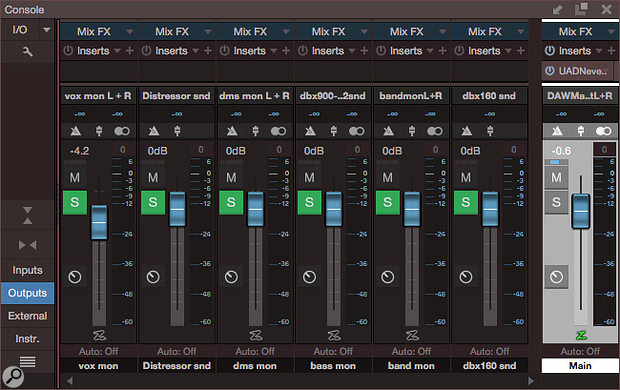 Screen 4: This template has ‘mon’ outputs that were used for cue mixes during recording, but now are ready to export stems. In this example, there will be only four stereo stems.

It is easy using the Export Stems command to export each and every track and channel to its own file, but doing so creates an awkwardly large file set that requires organisational work to handle. Nevertheless, there are scenarios that justify (or require) reassembling the mix track by track. Perhaps the tracks need to be taken to a mix engineer at another facility for use in a different DAW, or maybe you anticipate a bottom-to-top remix at some point. Applications like these benefit from having every track broken out individually, even though it entails much more housekeeping work to manage all of the files and mix structuring.

In the track export scenario, as well, one should consider how far to break out effects. Some effects, like rhythmic delay patches, might be fundamental enough to a musical idea to justify being baked into the audio, whereas a general-use reverb could be broken out, allowing for a different interpretation of the space when the material is revisited. Effects tracks can add up quickly, but effects not broken out are thereby committed to.

Eventually, every project ends, but some projects get revisited later. Preserving access to completed projects requires a bit of forethought and a chunk of disk space, but, really, not a whole lot more — so whether you preserve stems or a complete track archive, it’s got to be worth doing.

The function of Studio One Projects is primarily mastering related: they provide the means to assemble and export finished projects, so there aren’t features dedicated solely to exporting for backup or archive purposes. However, it is a good idea to export a Project in more than one form.

For example, you might make a DDP file set to send to a CD pressing service, but you can also use the Digital Release function to export individual mastered files, both in one or more compressed formats for online distribution, and also as full-resolution WAV files for future use. The Image function can make a single audio file containing the entire mastered work. You will also want to preserve the source mix files used by the Project page, in case you ever want to remaster from the original mix files.