Studio One supports many varieties of time‑stretching.

One of Studio One's strengths is that, being the most recently created of the major DAWs, it was designed from the start to take advantage of multiple processors and efficiently employ the power of current CPUs. As a result, Studio One is capable of executing complex effects like pitch‑shifting and time‑stretching on multiple streams in real time, rather than having to render them to a file. Studio One can use time‑stretching to change the speed of recorded audio so it stays in sync with tempo changes or gets quantised to the rhythmic grid. It can also perform time‑stretching freely without reference to tempo. Studio One users running Celemony Melodyne will be aware that it, too, has time‑stretching functions, but I write this month only of Studio One's native tools.

Wanting audio to play in sync with an existing tempo implies that you are measuring the piece in bars and beats (or you wouldn't have such a tempo!). Most people look for the ability to synchronise loops or recorded audio with the project tempo, so let's look at those capabilities first. For Studio One to perform tempo‑sync'ed time‑stretching, it requires that each audio file to be tempo‑sync'ed have a tempo assigned in the File Tempo field in the Event inspector, which you see in screen 1. So how, I hear you ask, does one assign a tempo to an audio file? Let me count the ways...

Read the tempo from the file: depending on the file format, the tempo might be encoded into the file header, as it is with Studio One's Audioloop format. If Studio One can read a tempo from an audio file, it automatically assigns that tempo in the File Tempo field.

Screen 1: The File Tempo field in the event inspector is key to tempo‑sync'ed time‑stretching.Stretch to fit: an event can be stretched to a desired duration in bars and beats. Studio One derives an audio file tempo based on the duration and then assigns that tempo to the file. Note that the tempo calculated for the event is applied to the entire audio file on which the event is based.

Turning Snap on and setting the Quantize Value to a convenient duration, such as a bar, can speed up this method greatly by making it easy to stretch to an exact number of bars or beats (see screen 2). Select the arrow cursor and move the event to the desired start time. Now hold down the Option and Command keys (Windows: Ctrl and Alt) and move the cursor over the trailing edge of the event you want to stretch. The cursor will turn to an arrowhead and a metronome. Drag the end of the event until the event fills the desired duration. When you release the mouse, Studio One will calculate the file tempo and enter it in the File Tempo field.

Stretch to beat match: this is an interesting method, in that it allows you to fit the overall length of an audio event to a certain number of beats or bars without strictly quantising it. The idea is to locate prominent beats at the beginning and ending of an event by eye, then line them up with the appropriate beats on the timeline. First, make sure the start time of the event is trimmed tightly to the downbeat. Then select the arrow cursor and move the event to the desired start time — usually a downbeat. Scan the waveform in the event visually to identify a prominent transient near its end. This is your reference beat. It's even better if you can spot another reference beat shortly thereafter, such as the upbeat following a reference downbeat. Identify where the reference beat should fall on the timeline, then hold down Option and Command (Windows: Ctrl and Alt) and drag the trailing edge of the event until the reference beat lines up with the correct location in the timeline.

When you release the mouse, Studio One will calculate the file tempo based on the start time and reference beat. As tempo gets changed, the rest of the beats besides the first and reference will maintain their relationship to the grid lines. If a musician has hit section changes spot on, but grooves just behind the beat during the sections, this method enables you to lock the section changes but keep the groove. 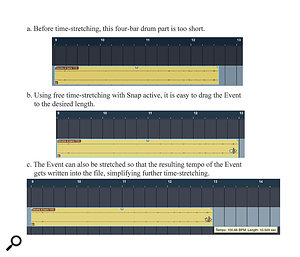 Screen 2: An event can be dragged to the desired duration, with or without adding a file tempo.Tap tempo: position the cursor over the word Tempo beneath the tempo value in the transport area. Click the mouse button in time with the music. It is usually best to click a number of times. Studio One will calculate the tempo and enter it in the File Tempo field.

Manual entry: Click in the File Tempo field and enter a value directly. This is the easiest method if you are using a loop that has the tempo in the file name but not encoded in the file itself.

Beat analysis: Studio One can scan an event for transients, which it assumes to be rhythmic and therefore indicative of the tempo. It enters the tempo in the File Tempo field and places Audio Bend markers at transients that indicated beats. Select the event you want to analyse, open the Audio Bend panel and set the Timestretch field for the kind of material that the event contains. Set the Action field to Quantize to put Audio Bend markers in and quantise them to the grid, or set the field to Slice and tick the Merge and Quantize boxes to cut the audio up, merge it into an audio part, and quantise the slices.

The Fabric Of Time

Once a file tempo has been assigned, tempo‑sync'ed time‑stretching is easy. Note that Studio One's time-stretching is real‑time, non‑destructive processing. 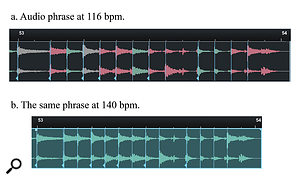 Screen 3: With Audio Bend markers inserted at transients (the blue lines), time‑stretching is done automatically to accommodate tempo changes.The simplest method is to enable auto time-stretching on the track. Select the track you want to stretch and press the F4 button to open the inspectors. In the track inspector, be sure the Tempo field is set to Timestretch. If it is set to Follow, Events will get their start times quantised, but they won't be time‑stretched to fit the tempo. The other setting is the Timestretch field (yeah, a little confusing to have 'Timestretch' be both a field and a closely related parameter value), which should be set to Drums for percussion, Solo for monophonic melodic instruments such as flutes or vocals, or Sound for everything else. If you used a method that placed Audio Bend markers, choose Audio Bend for the Timestretch field. Now, audio on the track will be time‑stretched appropriately when the tempo is changed, as you can see in screen 3.

For audio parts (merged collections of slices), things are a little different. First, select the audio part(s) you want sync'ed to the tempo. In the Audio Part inspector, check the Stretch Events box. The individual slices in the audio part — which are actually just linked but separate events — will be time‑stretched as necessary to match tempo changes.

If the playing wasn't precise, you can quantise the audio to the grid, with time‑stretching applied as needed to make everything fit. This requires that Audio Bend markers be in place, but with them there, it's simple. Set the Quantize Value to the grid value you want, select the event(s) you want to quantise, and press the 'Q' key.

There are times when you don't need your time‑stretching to be tempo‑sync'ed, for instance when stretching sound effects or legato sections. Studio One offers two methods of time‑stretching independent of tempo. First, there is the Speedup field in the event inspector (screen 4). The value in the field is a multiplier for the event's duration. As the name implies, higher values speed up playback more. You can drag up and down over the field or type in the value. Either way, the length of the event in the arrange view will change to indicate its length. Note that the Speedup field affects only the selected event, not the audio file on which it is based.

The other method is similar to the 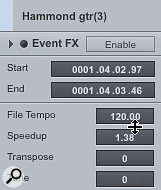 Screen 4: The Speedup field offers a way to time‑stretch the selected event without affecting the source audio file. stretch‑to‑fit method. Select the arrow cursor and move the event to the desired start time. Hold down the Option key (Windows: Alt) and move the cursor over the trailing edge of the event you want to stretch. The cursor will turn into an arrowhead and a clock. Drag the end of the event until it fills the desired duration. Note that a file tempo is not assigned.

As previously mentioned, time‑stretching is a DSP‑intensive task, and even more so when done in real time, so there are limits as to what you can do. If you are trying to stretch a lot of tracks, you may hit the limits of your computer, and if you try to stretch too far, the effects can be clearly audible. On the other hand, there are some interesting effects created by stretching or compressing something radically.

Studio One's time‑stretching capabilities are simple to use, which definitely leads people to turn more easily to them to solve problems or just have fun. I have a session dedicated to loops I like to practise drums with. I often play for a while at one tempo, then change to another. Now, the next time you feel the need to stretch a point, you know how to do it!