Stuck In The MIDI 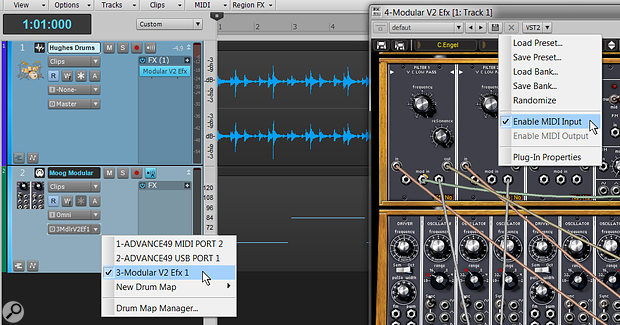 Get to grips with Sonar’s latest MIDI editing tools.

It’s almost inconceivable that a computer-based specification developed over 30 years ago is not only still relevant, but more popular and common than ever. That’s a testimony to the work of Dave Smith, Ikutaro Kakehashi, and the other industry heavyweights who developed and supported the MIDI spec — they got it right. But it also shows being able to translate performance gestures into computer-friendly data remains important for today’s music.

When inexpensive digital audio recording became a reality, it looked like MIDI might fade away. But then virtual instruments surged to the forefront and MIDI over USB eliminated the speed bottleneck of the five-pin DIN connector interface. MIDI is back with a vengeance. Let’s look at three of Sonar’s new MIDI features, as well as rethink the best way to edit MIDI controllers.

Some effects, such as pitch transposition processors and virtual synthesizers with external audio inputs, can respond to MIDI note and trigger signals. Sonar now makes it easy to accommodate these.

Suppose you want to trigger filter envelopes from a keyboard to process a drum part. Insert the synth in the track’s FX Rack, and make sure it’s set to receive an external input. From the VST 2 or VST 3 drop-down menu in the plug-in header, choose Enable MIDI Input. If the effect can respond to MIDI, this will expose an available input to a MIDI channel, so set the channel’s output field to the instrument input.

That’s it. Now you can control your plug-in with a MIDI keyboard or other MIDI controller, and do things like trigger VCA envelopes to create stuttering and chopping effects, force pitch-correction software to specific pitches, or ‘play’ melodic filtered parts with the keyboard (by setting up a filter to track the keyboard pitch, and turn up the resonance to give a sense of pitch).

The Pattern tool provides a different and fast way to copy and paste MIDI data in the Track View and Piano Roll View. In either case, you need to select what you want to copy first, and then use the Pattern tool (found in the toolbar’s Tools section as one of the Draw tools; you can cycle through the Draw tools with F9). However, the behaviour is different in the two views.

If you select the Pattern Tool in the PRV, you can right-click and drag to create a rectangle around the notes to be selected. Then, click where you want to start pasting (the paste point is the middle of the Pattern Tool; having Snap on makes note placement easier), then drag right. As long as you keep dragging, the section will repeat as if it was a MIDI Groove Clip. Note that you can also paste on top of existing notes.

With the Track View Edit Filter set to Clips, drag with the Pattern tool in a Clip’s top half to select the data you want to copy. Next, click in the Clip’s lower half and drag to copy. You can drag on top of existing clips, but note that this does not create new Take Lanes — the patterns will be overlaid on top of each other. If you want them to become a single clip, bounce them.

The pattern on the left has been selected and ‘painted’ in as a repetitive pattern.

With the Track View Edit Filter set to Notes, the behaviour is the same as with the main PRV (including right-click dragging to select notes). Note that if you select multiple Clips, when you create the pattern it won’t copy these as separate Clips, but as one continuous Clip. This can be very handy if you have, for example, a drum part for the first verse that consists of multiple clips. If you want to copy the same part for the second verse, it will be copied as a single Clip. 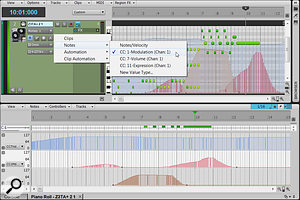 The advantage to editing MIDI in individual strips in the PRV is that you can see the CC numbers individually and unambiguously. If there’s only a few CC (continuous controller) numbers being used, each can have a decent enough height to allow for accurate editing and drawing. However, as you add more CC numbers, each strip becomes shorter. This makes precision drawing more difficult. Although you can hide strips, to see them again you have to add a strip and use a drop-down menu to re-select the desired CC number. I prefer this view when I’m primarily interested in editing notes, but also want to reference what’s happening with the controllers.

The advantage to editing them directly in the Piano Roll View is that all controllers can have as much height as your screen will allow. The controllers are overlaid on each other and, optionally, on notes as well (you can hide/show controllers and/or notes). This makes it very easy to see the relationship among all these elements — however, with lots of controllers, the visuals can get a little cluttered. Fortunately, when you want to edit a controller, you can use the Edit Filter Notes option to choose a particular controller. This de-saturates the colours for the other controllers so the selected controller stands out.

Editing controllers with the in-line PRV works in the same way as the main PRV. I prefer this controller editing method if there’s a reasonable number of them, and the controller values are relatively pronounced (ie. not subtle, small values). Overall, this option seems most universally suitable for MIDI CC editing.

MIDI envelopes generate different data compared to the MIDI controllers you edit in the main or in-line PRV, so while they can control the same parameters, you don’t want to do that. As a result, to edit existing PRV MIDI controllers as envelopes, you need to convert the controllers to envelopes first. (Of course, you can also create MIDI envelopes in lieu of drawing them in the PRV.)

To convert, select the track and time range containing the envelope you want to convert. Then, choose Clips / Convert MIDI Controllers to Envelopes. A dialogue box appears where you specify the controller to convert as well as its channel. You can’t convert all controllers to envelopes at once, but this allows you to have a mix of MIDI automation envelopes and standard MIDI controllers in the in-line PRV. There are several advantages to using controller envelopes:

The biggest disadvantage, though, is that conversion is a one-way street — you can’t convert an envelope back into conventional MIDI controllers that appear in the PRV.

The 2015 version of Sonar added velocity scaling for the Piano Roll View, which makes velocity dynamic range ‘compression’ and ‘expansion’ simple. With the Smart tool, right-click and drag around the velocities you want to edit, hover the cursor over any velocity value’s peak so the cursor turns into an up/down arrow, and then, while holding shift, click and drag up or down. All the values will change ratiometrically — much better than changing linearly.

Dragging down compresses the velocities by lowering the loudest notes the most. You can then by add ‘make-up gain’ to the new values by selecting the velocities, then choosing Process / Scale Velocity. Tick Percentage and enter a number bigger than 100 for Beginning and End. Expansion works in a complementary way, but afterwards you’ll want to enter a number lower than 100 to bring down the peaks.