Studio One: Mid-Sides In The Channel Editor

Screen 1: Three years ago, this is what it took to separate the mid and sides elements of a stereo signal. It worked, but yikes!

Studio One 3’s new Channel Editor opens up a host of possibilities, including creative M-S processing.

When I first began writing this column three years ago, the very first workshop that appeared in these pages was about M-S (mid-sides) processing. Although Studio One’s Mixtool plug-in can matrix an L-R input signal into an M-S output, it does not allow separate access to the Middle and Sides channels. This meant that if you wanted to process these signals independently, you had to construct a somewhat unwieldy setup involving several mixer channels, shown in Screen 1 (shrunk to save space) above.

No longer. Studio One 3’s new Channel Editor makes it easy to convert a stereo signal from left-right to mid-sides, carry out separate processing on the mid and sides channels, convert the signal back to left-right, assign controllers to adjust the mid-sides balance and tweak other processing parameters, and save the whole setup as an FX Chain preset you can call up any time. Très cool.

Let’s take a look at how this is done. Along the way it should become very clear how many purposes the Channel Editor can serve, encapsulating setups ranging from the simple to the sophisticated.

Start with a stereo audio channel in the mixer (though a Bus or FX Channel works just as well). Click the knob icon below the Record button, and the Channel Editor will open into the Macro Controls view. We’ll come back here, but right now, click on the block diagram icon to open the Routing view, which is where we are going to assemble our processing.

As in mixer channel insert areas, plug-ins can be added using the drop-down menu that appears when you click the Inserts legend, but I generally find it easier to drag them from the Effects tab of the browser. Since the Routing view encompasses an entire signal path, you drag a plug-in to the location in the path where you want it inserted.

The first thing we want to do is convert our left-right stereo signal to mid-sides, so drag the Mixtool plug-in into the Routing view and click the MS Transform button. Following this processing, the ‘left’ side of our stereo channel now conveys the mid (sum) component of the signal and the ‘right’ the sides (difference) component. To process them independently we need to split these apart, and this is one field where the Channel Editor makes easy something that was a major pain before. Drag from the Splitter legend at the top of the view to just below the Mixtool plug-in and a Splitter is inserted.

The Splitter has three different methods of splitting a signal. These are Normal, which simply duplicates or ‘mults’ a signal to two different paths; Channel Split, which makes one path the left channel and the other the right; and Frequency Split, which is a crossover function that divides the spectrum of the signal and routes the high- and low-frequency components to separate signal paths. To process mid and sides independently, we need the second of these modes, so click the Channel Split button in the Split Mode section on the left side of the view. Note, by the way, the Splits field, which lets you split the signal to up to five different paths.

Now have fun! With separate access to mid and sides signals you can do whatever you want with them. For this example, I used a couple of common mid-sides tricks: compressing the mid signal and contouring the sides signal’s spectrum.

Drag the Compressor plug-in (or your favourite third-party compressor) and drop it on the left signal path just after the splitter. Compressing the mid signal has much the same effect as compressing the entire signal, in terms of adding punch and smoothing level variation, but, to me, it’s a bit more lively and dynamic when the sides signal is not compressed the same way as the mid (or, as in this example, at all).

Click the block diagram icon again to return to the Routing view and work on the sides signal. Drag the Pro EQ plug-in to the signal path on the right after the Splitter. When I first watched mastering engineers do mid-sides processing, I noticed they sometimes rolled off some of the low end on the sides signal. This focuses the sound a bit more on the middle. But be careful, because rolling off too much not only makes the sound thin, but peculiarly so! I tend to set the corner frequency so that it only rolls off the lowest bass — in this example, from 75Hz on down. The actual frequency you choose, as well as the steepness of the filter, should be determined by the nature of the signal being filtered.

Another trick I have seen mastering engineers do is add a bit of high-frequency shelf EQ to the sides signal only. Since our ears are more sensitive to mid and high frequencies than to low frequencies, this serves to emphasise the sides a little, effectively widening the stereo image. Changing the balance of mid to sides signal widens the signal, too, but distort the proportion too much and mix balances and panning are affected. EQ’ing the sides signal provides a gentler alternative widening method, though a little goes a long way: I can’t really think of a time where I’ve used more than 3dB of boost, and most of the time I use less. Of course, let your ears be your guide — sometimes more is more.

Bring up the Routing view again and there’s only one step left in the processing: converting the mid-sides signal back to left-right. An M-S matrix converts in either direction, so all we need do is drag another instance of Mixtool to a spot below where the compressor and EQ paths join, and set that Mixtool to MS Transform as well. In Screen 2 you see our now-complete and functional mid-sides processing setup. 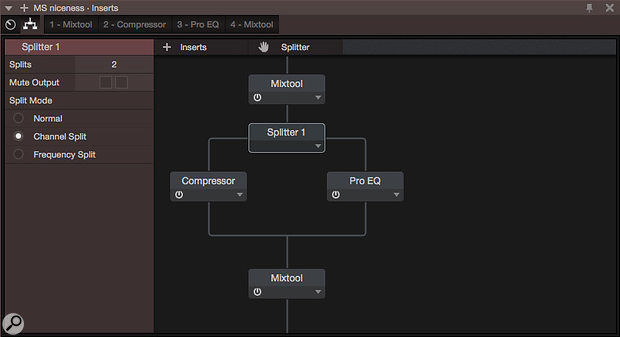 Screen 2: Now that’s more like it! This is the entire same setup as Screen 1 encapsulated within the Channel Editor of a single mixer channel. 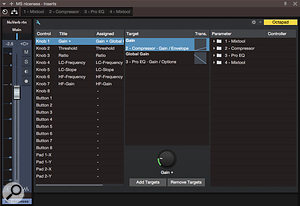 Screen 3: It just gets better in the Mapping view where parameters are mapped to controls. One or more parameters can be mapped to a single control, each scaled differently.Another of the Channel Editor is the ability to add real-time control. Click the knob icon, either in the Channel Editor or on the channel fader in the mixer, and the Macro Controls view opens. The first control we want is mid-sides balance, which requires controlling two parameters at once.

Now you’ll see why I’m so excited about the Channel Editor. Click the wrench icon in the upper left corner and the Mapping view opens (Screen 3). On the left are available controls, on the right are the plug-ins and their parameters, and in the middle is where we make our assignments. Open the Compressor folder in the right column and then the Gain/Envelope subfolder. Drag the Gain parameter over to Knob 1 in the left column and drop it there. Click on the scaling graphic for the Gain parameter on the right of the Target column and the Scaling view opens (Screen 4). 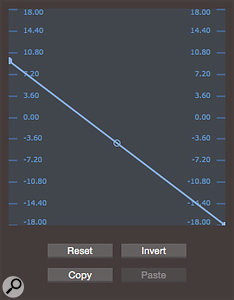 Screen 4: In the Scaling view you can set the starting and finishing values for a control, invert control, and set a curve that sounds good across the selected range. Successfully mapping more than one parameter to a single control without this view would be extremely difficult.We are going to set our knob to adjust the balance from 100 percent mid signal at one extreme to 100 percent sides at the other. That means fading down the gain on the compressor as the knob is turned up, so click the Invert button at the bottom. We probably don’t want to span the entire, wide gain range of the Gain control, so drag the dot on the left (now at +48dB) down to something more reasonable, like +10dB. Drag the dot in the middle if you want a scaling curve that is not strictly linear. Click outside the Mapping view to close it.

Now we need control for the EQ gain that works the other way. Drag the Global Gain parameter from the Gain/Options subfolder of the EQ in the right column, and drop it on Knob 1. Both gains now are controlled by the same knob, as indicated by a plus sign next to the knob name in the Macro Controls view. Click on the EQ Global Gain graphic in the middle column and set the range and curve as desired. Close the Mapping view, click the wrench icon, play some audio, and move Knob 1. Crossfade city.

Screen 5: The Macro Controls view is where the controls setup in the Mapping view get used. You can also link physical controllers to these controls for good old, real-time, tactile parameter manipulation. The wrench icon in the upper left opens the Mapping view. The X-Y controls are hidden in this shot.

The entire setup can be saved as an FX Chain, and Bob’s your auntie (times have changed). You can see from this one example how awesome the Channel Editor is. We will look at more examples in the future, but, for now, that should give you a bit to play with.