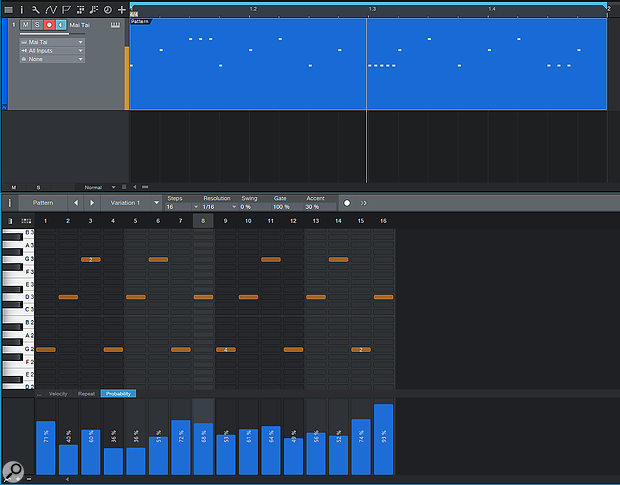 You can make a basic arpeggiated melody more interesting by messing with the probability and repeats parameters. The latter are also reflected in the timeline (top).

The new pattern editor in Studio One 4 isn't just for drums!

Studio One 4 introduced pattern-based step sequencing as an alternative mode to the familiar piano-roll MIDI editor. It's one of those features that makes you wonder why every DAW doesn't already have it. It's simple and intuitive in a way that's reminiscent of the creative tools we've come to enjoy in hardware. Pattern-based sequencing is most often used for drums, but as we'll see in this month's workshop, the Pattern Sequencer in Studio One can be just as easily directed to synthesizer and instrument sounds, and can very quickly generate something unexpected.

There are a few notions you need to get your head around in order to not find yourself befuddled by Studio One's pattern system. The first hurdle to overcome is how to put a pattern onto your timeline. The process feels quite convoluted at first, because there's little connection or flow between patterns and instrument parts such as MIDI clips. Ignore your desire to right-click or search around in menus: the Insert Pattern keyboard shortcut is the way to go. Click in the timeline where you want to put a pattern, select the track that it's for and hit Ctrl+Shift+P for instant pattern insertion.

The inserted pattern will default to being one bar long, with 16th-note resolution, so containing 16 steps. Changing the number of steps and the resolution will alter how your pattern is displayed in the timeline and also the speed at which the steps are played. This is best understood using a drum pattern, so, with a pattern inserted on an Impact XT track and a kit loaded, paint in 16 hi-hat steps plus a single kick drum on the first step so that you can identify the beginning of the pattern in the timeline. (You can make use of the little Quick Fill buttons that appear on the top right of the editor as rows of four boxes — these are super-handy, try them out!)

With 16 steps at 16th-note resolution, you get all 16 steps playing within the one bar, obviously. Increase the resolution to 32nd notes and your 16 steps are playing at double the speed, so the pattern plays twice in the same bar. If you set the number of steps to 32, the pattern will expand to show 32 steps; if you used the Quick Fill buttons, the new steps will already be populated, whereas if you drew them in by hand, they will be empty. If you go the other way and change the resolution to eighth notes then the bar is divided into just eight steps, and they'll play at half the speed of the default pattern.

If that relationship feels like too much maths, wait until we start setting different resolution values for each note!

On with the purpose behind this month's tutorial, which is to look at how we take a simple melodic pattern to interesting places. And we're talking about the rhythm of the notes rather than pitch. First, remove all other distractions and create a track with Mai Tai (the default sound is perfect for what we're about to do). Hit Ctrl+Shift+P to add a pattern. Let's keep it simple with 16 over 16, but you might want to bring the tempo down a bit, into the 80s. A pattern on an instrument track defaults to the piano-roll mode: this is what you need when writing melody, but comes at the expense of a few features such as the Quick Fill buttons and individual, per-note step and resolution counts. We'll come back to these in a minute, but in the mean time, pattern-based melody can feel a lot like a custom arpeggiator and that's a great place to start. If you have a MIDI keyboard attached, find yourself a three- or four-note chord, click the Step Record button and play each note in the chord in turn, over and over until you have filled the 16 steps. Alternatively, enter notes with a click. Loop the pattern in the timeline, click Play and you've got a great but ordinary arpeggiated pattern.

With about three clicks and a drag you can now completely transform this into something very different.

At the bottom of the pattern editor you'll find automation lanes. These are not the free-flowing lanes of the piano roll but per-step functions. (If they are not visible, click the tiny mountain-like button at the bottom of the piano keyboard to reveal them.) By default there will be three tabs labelled Velocity, Repeat and Probability. Let's start with Probability, which dictates how likely a note on a step is to play on any given cycle of the pattern. At 100 percent, a step will always play. At 50 percent it will play half the time, and so on. Drag your mouse through there, and your nice and clean arpeggiation quickly falls apart in very interesting ways.

Next, click on Repeat and add a couple of repeats to a couple of notes. These notes will then play the number of times you specify within the space of that single step. The rhythm and structure of your pattern has now taken on a life of its own. And while we're thinking about automation, you could also add a lane for the filter cutoff and have a different filter setting for every single step. You can of course do this for every parameter, and I hope you can see how endless the possibilities become! 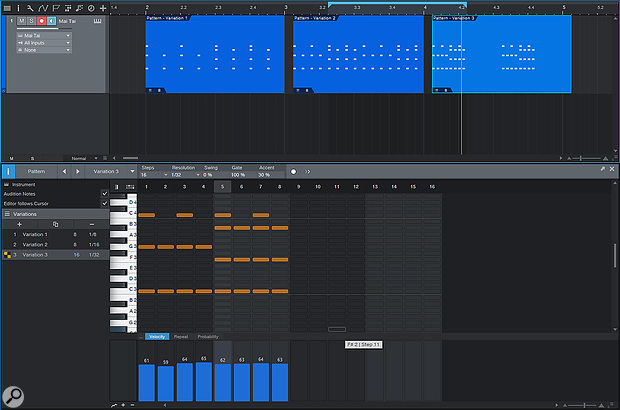 By default, copies of a pattern in the timeline are just 'ghosts' of the original. To vary the content of a pattern you need to either insert a new pattern or generate 'variations' of an existing one. A pattern can have multiple variations, and the advantage of this is that you can select and swap between variations in the timeline within that originally inserted pattern's part. What Studio One doesn't do very well at the moment is manage these patterns. Each newly created pattern is called 'Pattern' and each variation is just 'Variation' with a number. It would seem sensible to assign a numerical value to the patterns automatically, but you have to rename them by hand. You can drag and drop variations from the pattern editor to the timeline, but only from the selected pattern.

If you open the pattern editor's inspector, you will see the variations listed; the original pattern is always called Variation 1. You can add a completely new and blank pattern variation, or make a copy of the original in order to tweak it. These variations become available from a pop-up menu when you click on the bottom‑left corner of the pattern in the timeline. Variations don't have to bear any resemblance to the original in time, steps, notes or duration.

Meanwhile, back in the timeline you can use the same step/resolution relationship to vary the meter of the pattern, from long drawn-out notes to bursts of sound. Select a polysynth sound in Mai Tai and press Ctrl+Shift+P to generate a new pattern. Let's set this to eight steps at eighth-note resolution. Click Step Record and enter a chord on each step. Copy and paste to duplicate the pattern in the timeline, and then duplicate Variation 1 in the pattern editor. In the second variation, change the resolution to 16th notes and select Variation 2 as the content of the pasted pattern. You'll now have a bar with your eight chord stabs, followed by another bar with two lots of eight chord stabs played twice as fast. You could go much further. This is a good place to start playing with the Gate percentage, or maybe start tweaking the probability in the fast patterns, and it gets rhythmically interesting really quickly.

The Pattern Sequencer is a great place to experiment with polyrhythms — two or more phrases playing together that do not share the same rhythmic structure. Duplets over triplets would be the most common example, where one rhythm is playing two notes in the same space that another is playing three. As I say the theory is not that important and Studio One doesn't really offer any help in that regard. Instead let me show you where to fiddle and you can experiment for yourself. 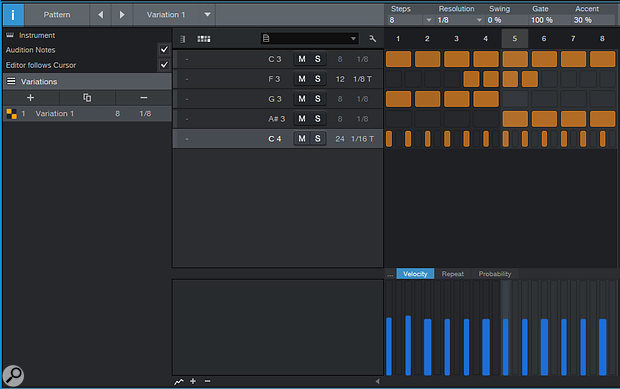 Editing your pattern in Drum mode allows you to adjust resolution and step size on a per-note basis, which is ideal for creating polyrhythms.

To make this work, you need to mess about with the rhythm of individual notes. Create a simple pattern of three- or four-note chords — say four stabs of one and four stabs of another, in an eight-step, one-eighth-resolution pattern. In melodic mode, we can't access the note lanes individually, but switch to Drum mode and we can see just the lanes of the notes that were played. Now we can change the step count and resolution of each note independently on their lanes. Choose a note and set it to 1/8T and 12 steps. Choose another note and set it to 1/16T and 24 steps. Both lanes still match the bar length of the pattern, but they now use different rhythms. You can also use the Quick Fill buttons to get a better idea of how the rhythms are working together. You can set these parameters to whatever you want and have steps spilling out into other bars, taking a couple of chords to some very strange places.

The beauty of the Pattern Sequencer in Studio One is that it can generate ideas. It can revitalise melody lines, introduce probability and right royally mess about with your chordal structures. It challenges you to do things differently and to consider things that perhaps you never would have thought of. 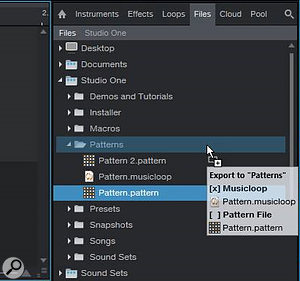 Studio One defaults to saving patterns as Musicloop files: press Shift to choose the Pattern option.In other pattern-friendly DAWs, such as FL Studio, all your patterns are always available in the browser. In Studio One, you have to manually export your patterns into the browser by dragging and dropping them from the timeline into a folder under Files — make sure you press Shift to change the export option to Pattern rather than Musicloop.