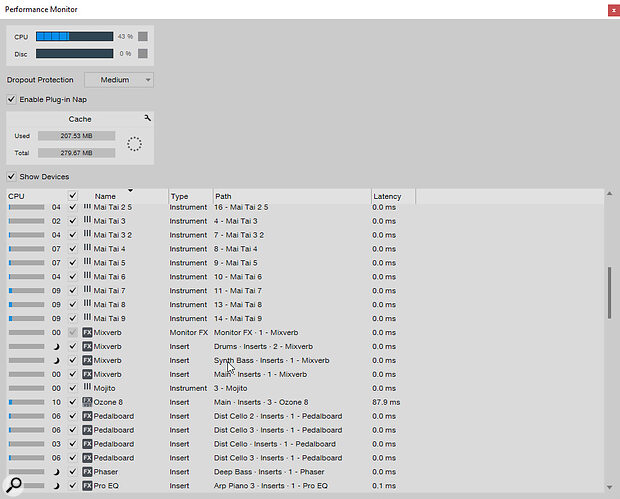 The new Plug‑in Nap feature puts your plug‑ins to sleep when they’re not passing audio, to free up your CPU. The crescent moon icon next to a listing in the Performance Monitor indicates when a plug‑in is putting its feet up.

The Studio One 5.4 update contains some good news for Apple M1 users, adds intelligent chord detection and display so you can really see what’s going on, saves you minutes by exporting to every format all at once, and catches a load of plug‑ins napping on the job — for good reason.

Most of us will be familiar with the idea of managing our plug‑in load. When those super‑big projects get a bit intense, we find the CPU performance meter starts to flirt with the overflow, and we’re rewarded with the odd pop and click, or things start to slow down to crawl. To free up a bit of processing headroom, we might render out or bounce a track or two with their effects to a new track, and disable the original track in order to unload the plug‑ins. A better way to do this is what everyone else calls ‘freezing’ but Studio One calls Track Transform. It’s an automated way of bouncing that track and releasing those plug‑ins, but one where you can quickly return to the original state if you need to edit the plug‑ins or instruments in it. It’s become a handy and common feature in every DAW.

PreSonus have had some further thoughts on this, and they’ve come up with an idea that should help reduce the amount of freezing/Track Transforming you need to do. They are calling it Plug‑in Nap, which is an adorable way of describing how Studio One will dynamically turn off plug‑ins that are not doing anything in order to free up CPU cycles for those that are.

Plug‑in Nap can be found in the Performance Monitor window (shown above). The Performance Monitor in version 5.4 shows you a list of all the loaded plug‑ins and their impact on the CPU. It’s actually an excellent place to spot where a particular plug‑in might be hogging the CPU or misbehaving as you play back your song. When you enable Plug‑in Nap, Studio One will detect when an effect plug‑in is not in use and quietly and humanely send it to sleep. The CPU usage value will be replaced with a crescent moon (shhh, it’s taking a nap). You can imagine how you often have a structure where different sections of a song are using other tracks, instruments and plug‑ins; Plug‑in Nap neatly keeps awake only those that are passing audio at that moment of playback.

I should note that, at the moment, this only works on audio effect plug‑ins and not instruments. It also doesn’t appear to work on plug‑ins that are inserted on the Main output channel, but then that’s not a channel you’d want to freeze or nothing else would work. It does work on third‑party plug‑ins and not just the PreSonus ones, in case you were wondering.

It’s not the same as unloading an instrument track or bouncing effects during a Track Transition, because the plug‑ins are still there when their time comes, so you’re not going to get the same CPU saving. However, Plug‑in Nap gives you a useful CPU drop without having to go through the inconvenience of freezing your tracks.

Talking of plug‑ins, the Plug‑in Manager has been updated to display the current version of the plug‑in installed on your system. It also now includes the Blocklist in the same window, so you can see exactly what the troublesome plug‑ins are and remove them or have a go at rescanning them.

When recording additional instruments, you often have to step away from the computer to express yourself. The Chord Display is fabulous in this situation...

Studio One has been interested in chords for some time and has become good at detecting the chords you’re creating, and helps you use that information to your advantage. A new feature added to the Note Editor will detect and display either the current chord that’s playing or, if you’ve selected some notes, the chord that’s been selected. It only needs two notes to hazard a guess at the chord you’re using. You can actually choose notes from anywhere, and it will pull out the chord that these notes would make if they were playing together. If you select a single note, it will base the chord on any notes that overlap. It tends to spell everything with sharps rather than flats, unless you’ve specified a key in your song. The more information you give it, the better it will be.

The Chord Display shows you what chords you’re playing as you play them, and will also indicate whatever chord is made up by your note selection.

There’s a big display you can bring up that merrily shows you the chords as you play your song, and it is musically fascinating to watch especially if you have no real idea what you meant to play. It’s also interesting that as you move notes in the Editor, the tooltip box gives you the changes in chord as you go. So you find yourself guided to finding the right or more interesting chords as you edit. When notes are spread around, it’s not going to be able to come up with exactly what you meant and will flash between various options based purely on the notes at the time. But that’s where your Chord Track comes in.

The Chord Display will also show you chords from the Chord Track. It will show you the current chord and the one that’s coming up, making it a useful tool for playing along to your track. When recording additional instruments, you often have to step away from the computer to express yourself. The Chord Display is fabulous in this situation because it allows you to easily see the chords coming up and enable you to play along without straining your eyesight. There’s a blue line that empties as the chord plays, reducing to nothing when that chord is over, which gives you a brilliant indication of when that next chord is about to happen. This also works in the Show Page, which is the perfect place for it. 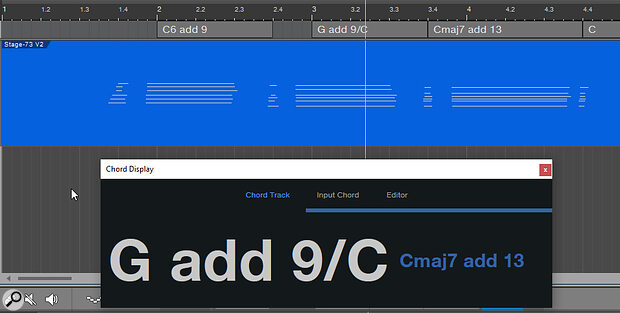 During playback, the blue line underneath the chord name shrinks down to indicate when a chord is about to end.

The third option in the Chord Display is Input Chords, where it will try to detect and display whatever rubbish you’re playing on your keyboard as a definable chord. This is all terribly useful.

Multi‑format Export In One Pass

Studio One can export mixdown files in several different formats. There’s the WAV file, AIFF, FLAC, Ogg Vorbis (who doesn’t enjoy receiving a good Ogg Vorbis file?), CAF, M4A and MP3. Usually you’d select which format you’d like to use, hit OK, and Studio One generates the mix in the file of your choosing.

With version 5.4, you can now export in multiple formats, all in the one pass. The default format is always initially selected, but you simply tick the boxes on all the formats you’d like to use. If you’re a PreSonus Sphere user, you can export all these formats simultaneously to a single Workspace. All the settings are now remembered when you close the window and reopen it, which is a long‑awaited tweak.

PreSonus have finished their work on building in full native support for the Apple M1‑based computers and architecture. Studio One now offers additional CPU optimisations for better overall CPU performance, but of course all your VST plug‑ins, instruments and hardware drivers will also need native support to take full advantage of the improvements. Nearly all PreSonus products, hardware and software are fully natively compatible with M1‑based Macs.

As with previous updates, there’s a whole load of stuff going on under the hood to improve performance and usability. One enhancement is that the PreSonus FX plug‑ins now use less CPU processing when the channels are silent, even if you’re not using the Plug‑in Nap function. Another is that your project now won’t autosave during playback, which can be one of those things that tips your computer over the edge. Instead, it will wait until playback is no longer in progress, and saving also takes less time.

One more little addition is that you can now remove all Sends on a track via a little drop‑down option, to save you precious moments of clicking more than once.