The True Cost Of Going Digital Skip to main content

The True Cost Of Going Digital 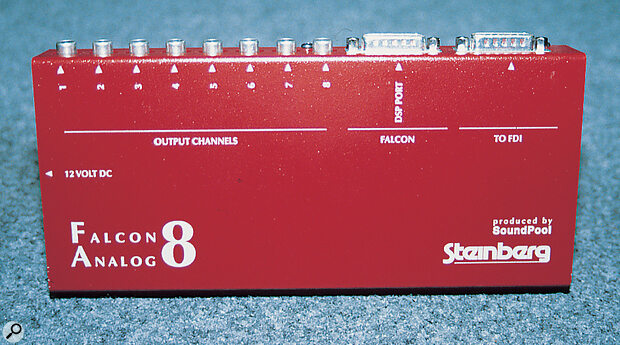 Many of you have probably read reviews of products such as Steinberg's Cubase Audio for the Falcon, and considered whether or not this is an avenue you'd like to explore. In my first column, some five issues ago, I looked at the current state of play in the Falcon market, but only glanced at what you actually need to 'go digital'. Perhaps it's time to look at this a little more closely... 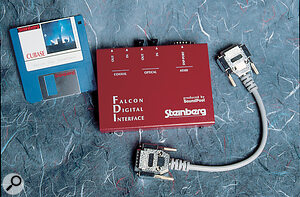 Digital recording is not new; there have been multitrack digital recorders from Sony and Mitsubishi for some years, followed not so long ago by budget 8‑track machines from Tascam and Alesis. Audio quality has improved over the years to the point where playback from, say, an Alesis ADAT is pretty well on a par with a high quality CD player.

However, all such units use tape as the recording medium, which removes one of the main advantages of digital recording; the random access nature of a hard disk. You want to hear the 16th bar of the guitar part? Just point to the on‑screen representation and click on the Play icon. Such flexibility is impossible with a tape‑based system.

The Atari Falcon is custom‑built for direct‑to‑disk recording. The inclusion of a Digital Signal Processor, or DSP, was as forward‑thinking as the in‑built MIDI sockets on the original ST. The big question is, what do you need to buy in order to have a fully‑operational direct‑to‑disk system? Costs from here on will be based on Cubase Audio, simply because it is the only integrated MIDI/digital audio sequencer currently available for the Falcon, although EMagic's Notator Logic Audio will follow shortly. At each stage, we'll look at the optimum purchase and suitable cheaper alternatives. 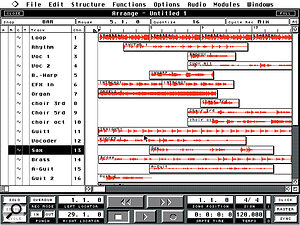 First up is the computer itself, a monitor, and the Cubase Audio software. The program will run on a 4Mb Falcon, although Steinberg, and Emagic, it appears, strongly recommend 14Mb of memory. The reason for this is that the program holds as much data as possible in memory, rather than writing to and reading from the hard drive all the time. A 14Mb machine costs around £1,300 without an internal hard disk; on a tight budget, the external SCSI drive can be used for the digital audio data, the programs and associated files, although you are certainly better off having a small internal IDE hard disk of 60 or 85Mb for the non‑digital audio files. This has two benefits; it ensures that a serious crash on the SCSI drive leaves your applications and song files intact, and it prevents the main digital audio disk from becoming fragmented, a problem that reduces performance. A small IDE disk should cost you between £100 and £200.

As you are probably aware, Cubase requires a screen with at least 640 by 400 pixels. On an ST, this limits you to a high‑resolution, mono monitor, such as Atari's SM124/5 or SM144/6, and such a unit can certainly also be used on a Falcon. However, if you want colour — the small audio waveform icons on parts are red, and there is every indication that Cubase Audio 2 will make more use of colour — then you'll need either an SVGA or multi‑sync monitor. The cheapest decent one of these costs around £200.

Then there's the software. The current retail price of Cubase Audio is £799, and although there isn't a fixed upgrade price, if you have version three of the program you can expect to pay around £450 when you trade in your old version for Audio.

Cubase Audio will not record to the Falcon's internal IDE disk; you have to buy an external SCSI drive. The question is, what capacity? As a rule of thumb, 5Mb of hard disk storage space gives you one 'track minute' of digital audio, so 100Mb equates to 20 track minutes. This may sound like a lot, but remember that this is in track minutes; if you're recording eight tracks of continuous music, a whopping great 40Mb of storage will disappear each minute! My advice is simple — buy the biggest hard disk your budget can afford.

No matter how large the hard disk is, sooner or later it will be filled. While this is an obvious comment, it means that you do have to consider what you'll do when this happens before you reach zero hour — or should that be zero data space!

Steinberg has a small interface called the FDI (Falcon Digital Interface), which connects up to a DAT machine, and with which you can save the contents of your SCSI drive. The current retail price is £399, and it's worth noting that the interface includes a digital input, so you can download existing data from your DAT machine. If you don't already own such a beast, you're going to have to find at least £500 for a reasonable DAT recorder.

The Falcon has two problems with its audio outputs; quality and quantity. Though the computer is capable of handling eight tracks of CD‑quality digital audio, all you have on the rear panel is a stereo 3.5mm jack socket. Cubase Audio does offer you various digital effects in its current eight‑track guise, and MIDI MixerMaps to control effects send, return and output pan. However, unless you're simply creating jingles, the chances are that you'll need individual outputs. To this end, Steinberg has designed the FA8, which boasts eight independent outputs, and can be used in conjunction with the FDI. Price is yet to be confirmed, but the indications are that it will be around £450‑500.

If you already own Cubase and have a mono monitor, then you can get a full system, including a 14Mb Falcon, FDI, FA8 and a hard drive for between £3000 and £3500, depending on the capacity of the hard disk. If you're starting from scratch, you'll have to add about £500 onto these figures, plus the cost of a suitable DAT machine.

Expensive? Not really, especially when you consider that a 16‑track version of the software is shortly to be released, made possible by some clever DSP code and data compression. Audio quality is slightly reduced, and the digital effects are inaccessible, but you do get a 16‑track digital recorder, an internal 16:8:2 mixing desk, and digital input/output. Such a system on any other platform will cost you over £10,000.

As previously mentioned, various alterations need to be carried out on the Falcon, including a clock circuit modification, removal of the bass boost, and changing of the input level from microphone to line. For this reason, I would strongly advise that you buy the entire package from a single retailer — both Digital Village (Tel: 081 440 3440) and System Solutions (Tel: 081 693 3355) currently provide such a service. Be prepared to haggle...

Are there any Hybrid Arts MIDITrack sequencer users still out there? If so, you may be pleasantly surprised to find out that you can still upgrade your program. The software side of Hybrid Arts took on the name of Barefoot Software when the company split, and both SMPTETrack and EditTrack are currently up to version 7.10, nicknamed 'Platinum'. For the paltry sum of £69, you can upgrade to the latest version. EditTrack Gold can still be bought for just £49 — and at this price it's an absolute steal, with 64 tracks, visual editors, and the most rock‑solid timing of any sequencer. If you want to buy SMPTETrack Platinum complete, it'll set you back just £199. For more information, call Digital Village on 081 440 3440.