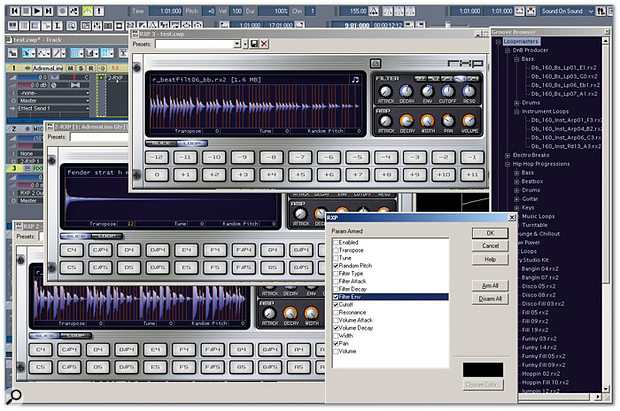 Now that the RXP REX-file player is bundled with the Producer Edition of Sonar 5, the creative possibilities of REX files have really opened up for Sonar users. We take a tour around RXP and discuss its features and uses.

S onar users have enjoyed the ability to import, export, create and edit ' Acid ised' loops since version 1.0 of the program. The Acid isation process was first introduced in Sonic Foundry's Acid program (subsequently acquired by Sony), and offered the unique ability to time-stretch and pitch-shift digital audio with reasonable — and sometimes outstanding — sound quality. In version 4.0, Sonar added the ability to change pan, pitch, and level for each 'slice' in an Acid ised file.

However, another time-stretching file format — the REX file, developed by Propellerhead software — remained out of reach to Sonar users until recently. (There has always been the workaround of 'Rewiring' a program that supports REX files, such as Propellerheads' Reason, with Sonar, but this isn't the same as native support.) Fortunately, Sonar 5 Producer Edition now bundles the RXP REX-file player, designed by René Ceballos of RGC Audio, thus opening up this alternative looping protocol to Sonar users. (Note that RXP is not included in Sonar Studio Edition.)

The most common tool for REX-file creation is Propellerheads' Recycle program (currently at version 2.1), but many sample libraries are available in REX format if you don't want to have to make your own. You bring in a WAV or AIFF file, then create 'slices' at each transient. This is a semi-automated process, but it generally requires some manual editing as well, to optimise the slice points. Ideally, each slice should have a discrete sound: a kick drum, kick + snare combination sound, hi-hat hit, and so on.

When you save the sliced REX file, a MIDI file that triggers each slice is bundled with it. When you bring a REX file into a host program, either a MIDI track will be created automatically, containing the MIDI portion of the REX file, or you'll need to somehow drag or import the MIDI portion into a MIDI track. Sonar 's RXP player uses the 'drag and drop into track' option.

If you search on ' RXP ' in Sonar's Help file, you'll find... nothing. Instead, bring the RXP player window to the top, click anywhere within the instrument itself, then hit function key F1 to see the Help file.

Although you can use the Insert / Soft Synths command, I don't recommend this, as it makes available only a sub-set of the RXP 's parameter-automation options (we'll discuss this in depth later). Instead, do the following:

1. Create an audio track and a MIDI track.

4. In the MIDI track's drop-down menu, select RXP 1 as the MIDI output.

Note that this insertion technique works with many soft synths. If you find you can't arm instrument parameters for automation using the standard Insert command, try it instead (see screen above).

When you load a REX file into the RXP player, remember that you're loading both digital audio slices and a MIDI file.

The RXP loaded into Sonar 5. The insertion into the audio track's FX Bin is circled in red. The companion MIDI track's output has been assigned to the RXP (circled in yellow). The Load button (circled in blue) allows REX files to be loaded. 1. Click on the RXP 's Load button, and navigate to the desired file.

2. The first time you load a REX file during a project, a balloon will remind you that the file contains a MIDI pattern, and point to the note symbol to the lower left of the Load button.

3. Drag the symbol into the MIDI track where you want the MIDI file to begin (see screen, right).

An alternative way to load REX files is via the RXP 's virtual LCD. If nothing is currently loaded, you'll see a strip that says 'Empty (Click here to browse grooves)'. Otherwise, you'll see the name of the currently loaded file, and its size. In either case, if you click in it a Groove Browser appears. This accesses content located in C:\Program Files\Cakewalk\Shared DXi\RXP\Contents. There's also a User folder in the Contents folder, where you can store your own favourite REX files.

One Sonar feature that's particularly useful with REX files is the ability to create MIDI groove clips. This means that you needn't laboriously copy and paste the MIDI file to cover the length of the section where you want the REX file to play back. Simply convert the MIDI file into a MIDI groove clip, then click and drag the clip's right edge to the right, thus 'rolling out' the clip and creating as many 'iterations' as you like. The clip's corners change from right angles to rounded corners, to indicate its groovy status.

There are several edits you can do in the RXP 's LCD window, without turning to its other controls. We'll cover the latter shortly.

Upon loading, the REX file waveform appears in the RXP's waveform view window. You can now drag the companion MIDI file into the MIDI track whose output feeds the RXP.

Still on the fence about whether you want Sonar 5 or not? Find out for yourself with the web demo.

This version of Sonar Producer Edition 5.0.1 has several limitations, as detailed on the Cakewalk web site. You can't save files, put data on the Windows clipboard, export audio, Acid files, videos, or MIDI groove clips, or bounce to clips or tracks. There are several other limitations too, which are basically designed to allow you to work with the Sonar 5 demo but not really preserve the results. Furthermore, several instruments and plug-ins aren't included.

However, you do get trial versions of 11 Sonitus Direct X plug-ins, the Cyclone and Dreamstation DXi2 synths, the TTS1 DXi (although it stops functioning after 10 minutes and beeps every 10 seconds), the Pentagon I and PSYN II DXis, an SFZ Soundfont sample player, and eight Cakewalk MFX MIDI plug-ins. There's also the option of downloading a variety of content, including templates, to make it easier to evaluate the system. (Note that you need Direct X 9 installed on your computer for the demo to work.) For more info, as well as details about downloading, visit http://www.cakewalk.com/Support/kb/kb2005298.asp.

These controls, found to the right of the 'LCD', affect all slices globally; in other words, you can't edit individual slices, as you can with the Dr. REX module in Reason. Note that double-clicking any control restores it to its default setting.

This section includes a multi-mode filter and associated envelope, the latter being re-triggered with every slice. As with the amplitude-editing options, any processing affects all slices globally. 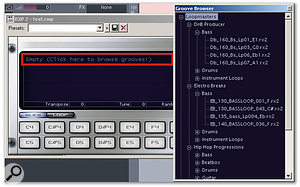 Click in the area highlighted in red to call up the Groove Browser. This shows the content that was included with Sonar 5 Producer Edition, as well as any REX files you've put in the User folder.

Again, as with the amplitude controls, double-clicking on a control resets it to the default position.

When you insert the RXP, by going Insert / Soft Synth, automation options (using MIDI track envelopes) are limited to reverse (Continuous Controller 1), pan (CC 10), expression (CC 11) and volume (CC 7). However, expression and volume seem to do the same thing and pan appears to have no real effect. Reverse, however, is pretty cool. It's switched so that values of 64 or below don't reverse slices but values above 64 do. Even better, you can do this in real time! In the Console view with Sonar 5 Producer Edition, you could set up Continuous Controller 1 on a fader.

Fortunately, when you insert the RXP manually into the FX Bin, as mentioned at the beginning of this article, you can access virtually all relevant parameters via either real-time control (tweak the RXP knobs) or MIDI envelopes. Here's how to set up for real-time control. 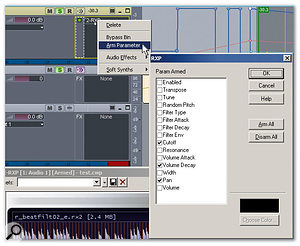 3. Tick the parameters for which you want to record automation.

6. As the sequence plays, move the knobs that correspond to the parameters you selected.

7. On playback, the knobs will re-create your moves.

1. Right-click on the audio track where the RXP is inserted and go Envelopes / Create Track Envelope / RXP.

2. Tick the boxes that correspond to the envelopes you want to create.

4. The envelopes you requested show up in the track.

5. Edit the envelopes as desired.

If you're automating using this method, bear in mind that Reverse is not available as an automatable parameter. Instead, you need to add CC1 messages in the MIDI track driving the RXP.

Do we really need two time-stretch protocols? Yes, because they're quite different. Acid isation uses DSP-based stretching, sample removal and crossfading. REX files cut a piece of digital audio into slices, then vary when those are triggered. The REX process's main use of DSP is to synthesize a decay when gaps appear between slices, which happens when playing back a file at a slower tempo. With percussive sounds, REX files have the potential for higher fidelity, as the sound is essentially unaltered, except for the decay effect mentioned above. However, sustained sounds don't lend themselves to the REX process, as they can't be sliced without causing discontinuities in the sound. Acid isation's ability to crossfade covers up discontinuities in sustained sounds and delivers far smoother results.

When altering pitch, both are somewhat compromised, and they work best for time-stretching. With either one, fidelity is better when speeding up compared to slowing down.

We've just about finished our guided tour of the RXP, but there are a couple more important aspects of the device to discuss: Slice and Loop modes (as selected with two buttons just below the left side of the LCD window), and how they relate to the 24-strong pad section along the bottom of the RXP.

This mode is handy for a variety of purposes, one of which is vocals. You can throw together strings of words or phrases, bring them into Recycle and slice each word individually. After saving the file and bringing it into the RXP player, you can then 'play' the words with the pads. (This recalls Sonar 's Cyclone DXi instrument; however, RXP offers eight more pads, which may be important in the case of vocal phrasing.)

In Loop mode, clicking on a pad plays the loop through once. However, each pad transposes the loop by a certain amount, starting at -12 semitones and going up to +11 semitones. Note that the tempo doesn't change; we're dealing with pitch transposition only. As with Slice mode, the pads can still be triggered by MIDI notes, although triggering starts with MIDI note C1 for pad number one and ends with MIDI note B3 for pad number 24.

It's Not Just About REX

Although the RXP player is optimised for REX files, it also accommodates other file types. I loaded up a WAV file of a bass note, looped at the end for use with samplers and, surprisingly, I was able to play it like a sampler in Slice mode, with different pads playing back different pitches. The RXP even recognised and played back the loop, and of course I could warp the sound with the onboard filter, amplitude and tuning controls. Granted, anyone who has Sonar 5 Producer Edition probably already has a sampler, or could use the Cyclone DXi to do much the same thing. But as a quick playback engine for samples, RXP is undeniably useful. It will also load AIFF, OGG and WAV files without loop points (they're treated as a single sample, as there's no slice info) and imports SFZ-format files too. Don't have any SFZ samples to try out? You might if you own Cakewalk's Dimension or Dimension Pro synth. Look around in the Dimension 's Multisample files folder and you'll find some SFZ files suitable for experimentation.