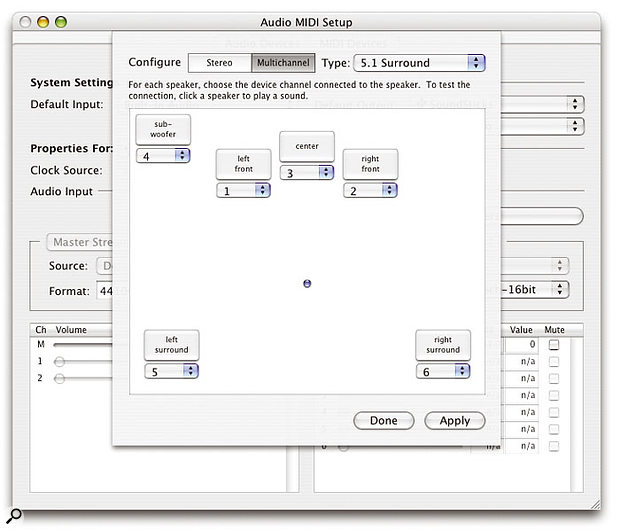 Multi-channel speaker configurations are easy to work with in Mac OS 10.3's second version of the Audio MIDI Setup utility.

There's plenty to investigate in this month's Apple Notes, from the Windows version of iTunes to the latest major update to OS X.

This month I've been trying to fall in love with a significant other who doesn't respond in the way I really desire. I'm talking, of course, about the 17-inch Powerbook. This tempestuous relationship had a rocky start when the brand new 17-inch model I was testing unexpectedly died and had to be returned within the first few days of our affair, although I'm happy to report its replacement is still healthy as I type this column!

From an aesthetic point of view, the 17-inch Powerbook is indeed beautiful, but I have to confess that, after spending some time with it, I realised it isn't the Powerbook for me. Compared to the 15-inch model, the 17-inch is considerably larger and heavier, and while the larger size is due, of course, to the use of a larger screen, the screen itself has a relatively low resolution of 1440 x 900. While this might not sound too bad, consider that this resolution is only 160 pixels horizontally and 56 vertically bigger than the 15-inch screens, and that in the Windows world it's not uncommon for 14- and 15-inch laptops to have similar (if not higher) resolutions. It's one reason why I think the 15-inch is perhaps better value — not to mention more portable — now that it features the Aluminium styling of its bigger brother.

Looking at actual performance, I found that the new 1.33GHz 17-inch model did offer improvements when compared with the first-generation 17-inch model. Running Logic, I was able to use 32 mono Platinumverb instances (compared to the 28 Mike Watkinson reported when reviewing the older model in this year's July issue) and 20 stereo instances. With Nuendo 2, I was able to run 20 (stereo) Reverb A plug-ins with the CPU meter at 68 percent before the signal started breaking up, and 23 instances before red lights began to appear. While these results aren't too bad on face value, I happened to be researching PC laptops featuring Intel's Centrino technology at the same time I was playing with the new 17-inch, and what I found was that a 1.3GHz Centrino laptop offered approximately a third more processing power, and without getting hot — believe me, the back of the 17-inch does get hot.

I only mention my initial Centrino observations to be objective about performance, rather than to offend any die-hard Apple fanatics, because I have to concede that I also spent some time using the 17-inch Powerbook to work with the EXS24 edition of the Vienna Symphonic Library. Running Logic Platinum 6.31, EXS24 MkII and Emagic's new Space Designer convolution reverb, it was, from a usability perspective, a dream system. With a simple USB keyboard and a pair of headphones, I had a perfect setup, and this is the type of situation where I see the 17-inch Powerbook being highly desirable.

New Powerbooks were the big news for Apple last month, of course, while the biggest Apple news this month is the release of Mac OS 10.3, which has been affectionately codenamed Panther, following the previous cat-themed releases of OS X. First announced at Apple's WWDC back in June, Mac OS 10.3 (and 10.3 Server) offer many improvements, and although there aren't really that many headline-grabbing new features on the surface, as a whole the Panther update is very worthwhile.

From the moment you boot up your Mac from the Panther install disc, you'll notice, firstly, that Apple have tweaked the user interface again (title bars of windows now appear in a grey-shaded tone, and menus are less translucent, for example); and secondly, that it's faster. The user interface finally feels as snappy as you would expect (compared with OS 9, for example), with menus, sheets and other elements appearing in far more responsive manner than in previous versions. Part of this is undoubtedly due to optimisations in Quartz Extreme (which allows the graphics hardware of your Mac to accelerate the onscreen graphics by taking the load of the main CPU). Even those with older Macs are reporting noticeable improvements.

To discuss Panther fully will take more than the space available in one column, so this month I'm going to focus on one part of the upgrade that will get less airplay than some of the more prominent features, and that's improvements to audio and MIDI functionality, as illustrated by the Audio MIDI Setup (AMS) utility first introduced in Jaguar.

The Audio MIDI Setup (AMS) utility has been updated in Panther and now, like so many other parts of 10.3, features a brushed-metal interface. To sidetrack the germane issue for just a moment, I personally find the brushed-metal appearance a little bit overpowering, although it's fortunately very easy to edit the application's resources (if you have Apple's developer's tools installed) to remove this. There are a number of freeware utilities that enable you to do the same thing in a more direct way — for example, Metallifizer (www.unsanity.com). However, I'll admit that this point could be considered a little bit pedantic! 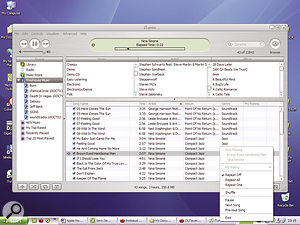 "Hell froze over" is how Apple rather appropriately chose to announce the highly-anticipated Windows version of iTunes on 16th October. I have to confess that this put me in a state of mind where my facial expression would easily have rivalled that of a Cheshire cat. I'm sure I'm not the only Mac user who also works on Windows machines, and if there's one thing I've missed when using Windows it's iTunes, especially since I bought a latest-generation iPod. And while there are many good MP3 players for Windows, for me none are as simple to use and as elegant as iTunes — especially, again, when it comes to handling an iPod.

The thing that surprised me the most about iTunes for Windows is that it really is, well, iTunes for Windows. From my initial inspections, it seems that the functionality and interface (right down to the initial setup assistant) are both identical to the Mac version of the software. iTunes for Windows makes use of the new QuickTime 6.4, which was released alongside the iTunes release, and its installation automatically upgrades your QuickTime installation. This affords the Windows version of iTunes full compatibility with Apple's FairPlay digital rights management technology, and also the AAC codec that offers significant improvements over MP3.

Another pleasant surprise with the Windows iTunes is that it also supports shared playlists over a network from other computers that happen to be running iTunes, whether they're Macs or Windows machines. Apple use 'Rendezvous' on Mac OS X to make this particular magic happen. Rendezvous is based on Zeroconf, a platform-independent networking technology, and it's commendable to see them fully embracing the possibilities. Certainly, it was neat to have access to my iTunes playlists across the network I spend most of my time connected to, the first time I ran iTunes under Windows.

In addition to releasing iTunes for Windows, Apple also unveiled what Steve Jobs described as the second generation of the iTunes Music Store (IMS), which will be offering around 400,000 tracks for download by the end of October. A new agreement with Audible.com means that the IMS now offers 5000 spoken-word titles as well. You can now buy your friends gift vouchers for the IMS, which is great if you're a lazy shopper like me, especially with Christmas looming. There's a host of new sorting options, and even Celebrity Playlists, if you've ever wondered what the celebrities are listening to. I can't say, in all honesty, that it's been giving me sleepless nights!

Waiting For a Bus

Aside from its appearance, Audio MIDI Setup V2 features numerous changes that reflect the internal improvements to Core Audio and MIDI in 10.3. One highlight is the return of the IAC (Inter Application Communication) bus — which allows MIDI data to be sent to and from applications that are running simultaneously — from OMS in OS 9. The IAC bus is represented by the IAC Driver Device on the MIDI Devices page of AMS, and you can double-click its icon to configure parameters such as how many virtual ports are available, and how they're named. 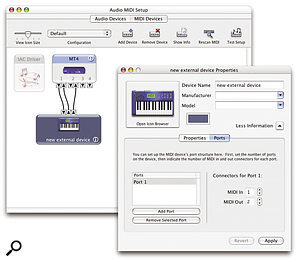 The MIDI Devices page of the Audio MIDI Setup utility offers the ability to configure some of the new Core MIDI features in Panther, such as the IAC buss and multiple port/node routing.Staying on the MIDI page for a moment, it's now possible to configure the MIDI Devices you create to have multiple pairs of input and output ports, and multiple input or output nodes for a single MIDI port, via the new Ports page in the More Information section of a Device's Get Info window (as illustrated). This replaces the 'Expert' information page in the previous version of AMS, which was admittedly useless from the user's perspective. In addition, the Get Info window now allows you to set a colour for the background borders of a MIDI Device. With applications such as Pro Tools and Digital Performer taking full advantage of the studio representation facilities in AMS, these enhancements are very welcome.

On the audio side, the Audio Devices page has been cleaned up a little and now features the ability to set clock sources for devices, plus improved support for multiple-channel speaker configurations (as illustrated in the main screenshot, above).

The pricing structure for Panther is the same as for Jaguar a year ago: a single-license update will cost £99 ($129), a five-license update will be priced at £159 ($199), and if you bought a new Mac after 8th October, or any G5 model (at any time), you're eligible for Apple's Up-To-Date program (contact Apple for details). Finally, if you purchased a boxed version of Jaguar after October 8th, you can buy Panther for just £14 ($19.95).

Next month we'll be venturing deeper into the jungle with Panther, and will be answering the question on every Mac user's lips: just how powerful are the G5s when it comes to music and audio? And you thought the screenwriters of 24 were good at cliffhangers... 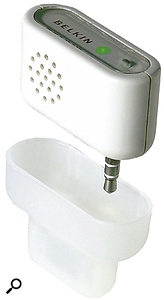 The iPod's system software has been upgraded to version 2.1, which adds, amongst other features, support for new accessories such as Belkin's iPod Voice Recorder. The Voice Recorder includes a small omnidirectional microphone and 16mm speaker and is most interesting, especially since there have been many hacks and details appearing on the web since the release of the third-generation iPods, showing how these devices could support recording.

Wearing my journalist's hat, I'm definitely going to be buying this particular accessory since, as Apple suggests, it will be perfect for interviews.