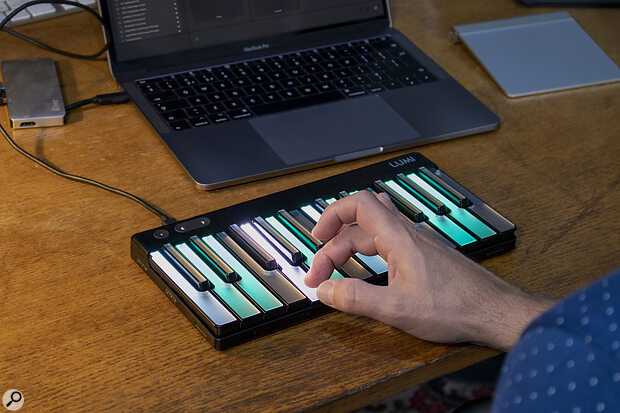 ROLI's campaign to bring MPE (MIDI Polyphonic Expression) into the mainstream continues, with the launch of the LUMI Keys Studio Edition. While the original LUMI Keys was a fairly standard compact MIDI keyboard, with illuminated keys and an accompanying Android/iOS app designed to help improve users' keyboard skills, the Studio Edition ups the stakes significantly, by adding extensive MPE compatibility and more.

Billed as the first-ever controller to incorporate MPE into a traditional keyboard format, each of the Studio Edition's keys can independently respond to and transmit glide (pitch-bend), aftertouch, strike (attack velocity) and lift (release velocity) data. This makes it suitable for controlling the fast-growing range of MPE-compatible software and hardware, including the latest version of Ableton Live and, of course, ROLI's own Equator 2 software instrument.

The light-up keys of the original LUMI Keys are also present, and can be used for training purposes as before, or as a compositional aid, by providing visual identification of scales, chords, inversions and arpeggios.

Not every synth and instrument is MPE-ready yet, of course, but the LUMI Keys Studio Edition will play ball with traditional instruments too. You can either disable MPE altogether, and treat it like a traditional keyboard, or introduce expressivity in stages: one up from traditional 'piano' mode is a polyphonic aftertouch setting, with the next step up introducing per-key pitch bends (full-fat MPE, which includes release velocity, is called '4D Mode').

The LUMI Keys Studio Edition is available to buy now from the ROLI website, and is currently on sale for the very tempting price of £269 (normal price £299). The launch bundle includes the ROLI Studio software, a LUMI Snapcase, three additional ROLI sound packs, and a $50 voucher, redeemable on any ROLI software, including Equator 2.

Click below to see and hear the new MPE controller in action.