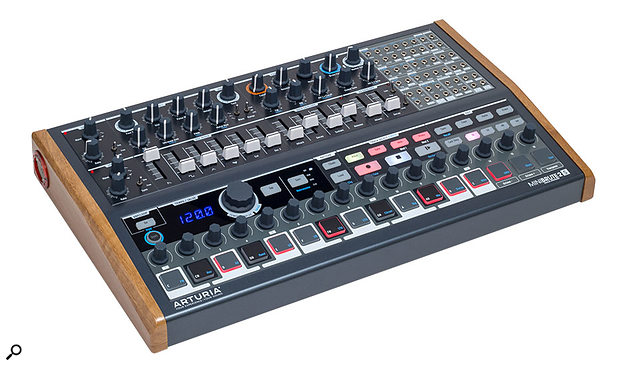 It was only yesterday that Arturia announced their brand new MiniBrute 2 analogue monosynth, now they’re announcing a new, sequencer-driven member of the family. The MiniBrute 2S shares its the signal creation, sound shaping power, and modular capabilities of the MiniBrute 2, but replaces its keyboard with a set of performance pads and an advanced, triple-layer sequencer.

The sequencer has space to save up to 64 sequences, and the ability to chain them together to create flowing performances. What’s more, its three layers allow for the creation of melodic sequences as well as parameter automation for additional musical movement.

Using Mod 1 or Mod 2 on the Sequencer edition, users can create function generators of their choice — an additional LFO, an Envelope Generator, Pitches, Gates, Stepped Voltage sources — and sequence these per-step.

Just like the keyboard-based version, the MiniBrute 2, the MiniBrute 2S features a semi-modular architecture, giving users the chance to rework its internal signal routing by patching into its comprehensive CV/Gate patch bay. The MiniBrute 2S can also take a commanding role in your modular setup, letting you use external modules to affect its sound, or send signals or sequences from the MiniBrute 2S to your Eurorack modules.

The MiniBrute 2S features many of the amazing features that made its predecessor, released in 2012, such a popular instrument, including mixable waveforms, the versatile Steiner-Parker filter, and Brute Factor distortion.

MiniBrute 2S also features the all-new, but as yet still mysterious Arturia Link, an innovation that the company claim will "help unify and democratize your creative environment.” Another announcement is expected tomorrow so perhaps we’ll find out more then. The MiniBrute 2S comes out in March and is expected to cost £599.

Until that time, check out the performance video to see and hear it in action and read our exclusive review in the February issue of SOS, available to subscribers and only £1$1.49.