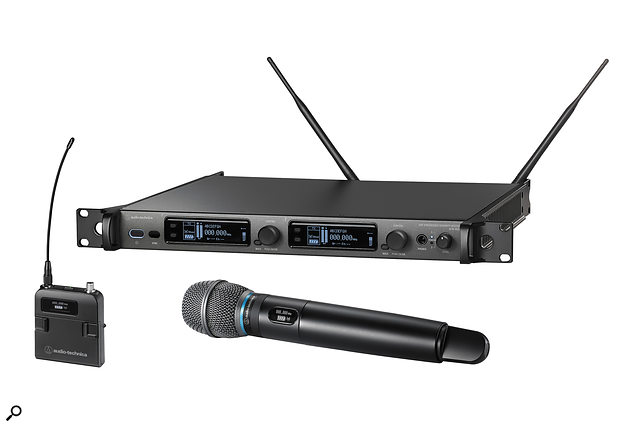 Announced earlier this year, Audio-Technica’s latest updates to their professional wireless systems are now available. Each comprising a receiver unit, body-pack and handheld transmitters and a range of interchangeable mic capsules, the new 3000 Series and 5000 Series feature a number of notable enhancements.

For the fourth-generation 3000 Series, the focus of these updates is on delivering reliable wireless performance in an increasingly cluttered UHF spectrum. The tuning range has been doubled to 60MHz and frequencies are scanned and selected using the receivers then synced with the transmitter via infrared. In addition, the transmitter can be switched to a preset a backup frequency at the push of a button in the event of unexpected interference. Meanwhile, the third-generation 5000 Series features a new receiver with a wider tuning bandwidth of 230MHz (ranging from 470-700 MHz) and the option of balanced XLR or Dante networked audio outputs. In addition to all of the frequency scan, IR sync and backup frequency functionality found in the 3000 Series, the 5000 Series also features remote monitoring and control via software and an antenna cascade output that allows a single pair of antennas to feed up to eight dual-channel receivers.