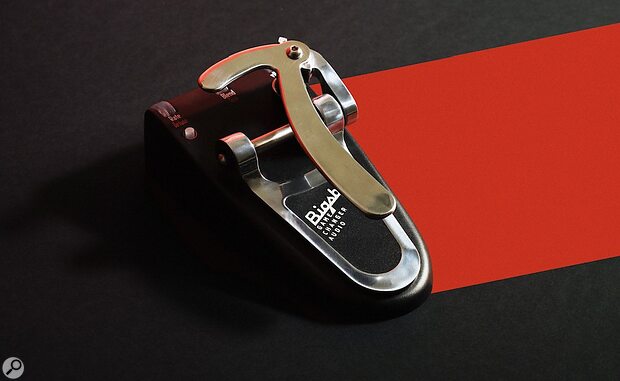 Gamechanger Audio have released the Bigsby Pedal, the latest addition to their range of innovate guitar pedals. Made in collaboration with Fender, the pedal is powered by a SHARC processor, and features a polyphonic pitch-shifting algorithm which Gamechanger say is capable of reproducing the feel and sound of the classic Bigsby tremolo arm, and much more. The design will be instantly recognisable to many guitarists, having been styled around the iconic Bigsby tailpiece.

There are Rate, Blend, Tone and Depth controls available, an Invert switch on the rear panel to change the pitch shift direction, and a Detune parameter to mimic the imperfections and dissonant properties of traditional mechanical string-bending hardware. The pedal is also equipped with an input for an external foot switch which activates a Latching Mode, and an expression output which allows the spring-loaded pedal to control other audio devices. A MIDI input in the form of a 3.5mm type B connector allows all of the parameters to be controlled by MIDI CC, and provides users with the ability to store and recall presets via Program Change messages. The pedal also responds to Clock sync, allowing the Rate parameter to lock to a specific tempo.

The pedal is always on, with the algorithm designed to ensure that transitions between the dry and pitched signals are as smooth as possible. Due to the effect being operated via a foot switch, Gamechanger say that the pedal allows players to create strumming patterns and bend combinations that simply would not be possible with a traditional tremolo system.

The Bigsby Pedal is available now, priced at 313 Euros.