Perhaps the most intriguing feature of the latest Nord Piano is the co-called ‘Virtual Hammer Action Technology’ that sets out to simulate the movement of the hammers in a grand piano. According to Nord, this captures the characteristics with “exceptional dynamics and breathtaking level of authenticity.” This action is then exploited with a ‘Triple Sensor keybed’ which allows key movements to be determined with greater precision, say its makers. The intention is to create a keyboard action that handles dynamic playing with great control at any velocity level. 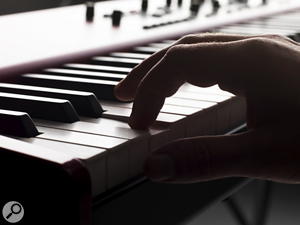 The practical benefits of the Virtual Hammer Action Technology are that you can produce a new note without lifting the key completely. This allows for smoother repetitions as the tone is not completely dampened between the strokes, similar to fluent transitions of a Grand Piano. The extended triggering range makes both top and bottom triggering possible, resulting in amazing control when playing percussively as well as pianissimo with the keys half-pressed down. The Virtual Hammer Action Technology also includes velocity sensitive release, which is designed to dynamically dampen the sound based on how quickly you release the key.

The keys have also been given a textured faux-ivory surface, providing authentic piano touch and feel, it is claimed. 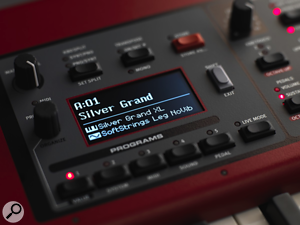 The Nord Piano 3 features 1 GB of memory dedicated to the exclusive sounds from the Nord Piano Library, with an ever expanding library filled with sampled acoustic and electric instruments. The Factory Bank features six Grand Pianos, five Upright Pianos, 11 Electric Pianos, Clavinet and Harpsichords. Replacing the sounds in your Nord Piano 3 is simply a matter of dragging and dropping files in the Nord Sound Manager for Mac and Windows.

The Sample Synth section in the Nord Piano 3 has 256 MB memory dedicated to the Nord Sample Library 2.0 - the company’s essential selection of high quality sampled sounds from a wide range of genres including the exclusively licensed sounds of the Mellotron and Chamberlin.

The Nord Piano 3 is due to arrive in the UK in May 2016 with pricing to be announced.