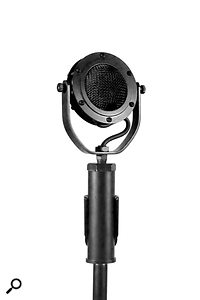 Boutique mic makers Ear Trumpet Labs have announced that their most popular mic, the Edwina — which we reviewed in 2013 —  is getting a stealthy makeover for a limited run.

Designed in collaboration with Dobro player Josh Swift, the new Dark Edwina is Darth Vader meets steampunk and we’re pretty taken with it. Like the original Edwina, its evil twin is a large diaphragm capacitor mic designed specifically for feedback rejection in demanding live settings.

The finish is a thin but hard-wearing black ceramic finish on metal applied in a process called Cerakote. The reason the mic looks ‘tactical’ is that this finish is primarily used in the customisation of firearms, so we’d expect it to be super rugged.

Hugh Robjohns praised the original mic’s “smooth but detailed tonal balance” in his review, and Ear Trumpet Labs say the mic is suitable for vocals, acoustic instruments and drum overheads but also works well in the studio as a recording mic.

The Dark Edwina is available now and costs $625.

Josh Swift tells the story behind the mic in this video: