EV have announced the release of their first battery-powered loudspeaker, the EVERSE 8. The portable device boasts a high SPL capability, full-bandwidth coverage, an on-board mixer and effects, and also features wireless control and audio streaming.

The EVERSE 8 is a compact and lightweight device, and has been designed with ease of lifting and transportation in mind whilst still upholding EV’s reputation for durability. The polypropylene enclosure and included weatherised input cover allows the speaker to meet the IP43 rating, meaning it is classed as water-resistant for splashes and light rain when running on battery power and utilising Bluetooth streaming.

There is a built-in four channel mixer, with the first two inputs accepting microphone or line-level inputs via a pair of XLR/TRS combo sockets (and also capable of providing 48V phantom power), and channels three and four accessible via either a 3.5mm stereo mini-jack connector, or wirelessly via Bluetooth. 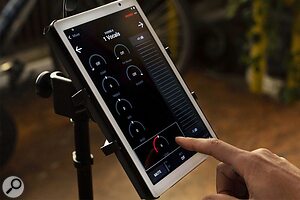 The speaker's mixing functions can be controlled remotely via the EV QuickSmart Mobile app. DSP is provided by EV’s sibling brand Dynacord, and the EVERSE 8 is equipped with effects processing as well as feedback suppression and audio ducking. All of the audio, effects, and mix functions can be controlled remotely with the EV QuickSmart Mobile app, which runs on both Android and iOS-based mobile devices.

The speaker is powered by a custom high-capacity lithium-ion battery pack, which offers up to 12 hours of operation at a moderate output (or 6 hours at maximum output), and can be removed without the use of tools. There is also protection circuitry in place which will prevent the battery from depleting to such a low voltage that it can no longer be recharged, after being stored for long periods of time, for example.

An integrated 12V DC port provides a power source from the devices battery, offering a convenient way to power a wireless microphone system, and there is an optional tray for mounting EV’s own RE3 or R300 wireless receivers on top of the EVERSE 8. A charging port for keeping mobile devices topped up is also included. 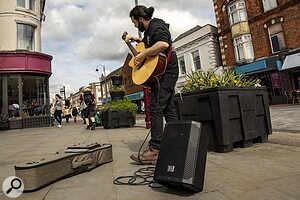 The EVERSE 8's compact format and water-resistant rating make it ideal for outdoor applications such as busking.The EVERSE 8 can be mounted on a tripod to allow a longer throw, whilst a 30° angle on the bottom edge of the cabinet allows for some additional upwards projection when being used on the floor. A 55° angle along the cabinets long side also allows the speaker to be turned onto its side and used as a wedge monitor. A pair of speakers can also be used as part of a stereo setup, with Bluetooth audio streaming providing a wireless solution.

The built-in amplifier is rated at 400W, and the device is capable of a maximum SPL of 121dB (measured at 1m using broadband pink noise at maximum output). Frequency response between -3dB points is quoted as 60Hz to 20kHz. The EVERSE 8 measures 400 x 275 x 272mm, and weighs 7.6kg.