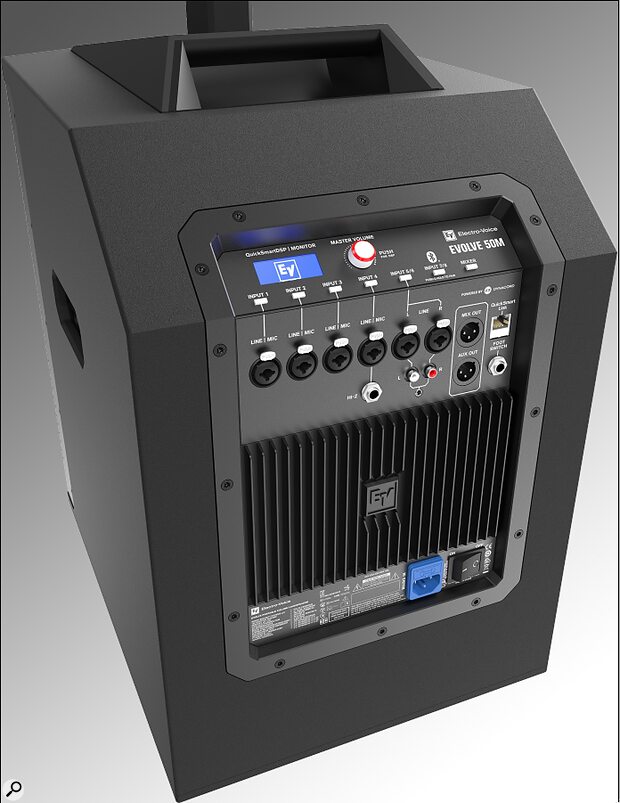 So, like the 50, this new compact line array sports eight 3.5-inch drivers in its column section, and a 12-inch woofer in the base unit (for more info about the speaker side of things, read our 2018 review here). The input section has been massively improved, however, and now sports four mic inputs (one of which can also act as a DI input), a stereo line-input channel, and a stereo Bluetooth input. Internal DSPs handle processing and effects (which include two internal aux effects for things like reverb and delay, plus global three-band and graphic EQs), and you can control all the functions either using the screen and encoder, or with E-V's QuickSmart phone/tablet app.

The network port labelled QuickSmart Link is worthy of examination, because it massively expands the 50M's potential uses. With two Evolve 50Ms linked together via Ethernet, you not only get a proper stereo system, but the mixer sections of each unit will be combined, allowing you to accommodate up to eight microphone signals (or six microphones and two instrument DIs), two stereo line signals and two Bluetooth streams, all without an external mixer.

Electro-Voice's new Evolve 50M is available in either black or white, and will sell for around £1900 including VAT.