Published 2/9/10
Computer, controller and groovebox in one!

Unity Audio have just sent us a press release about a curious new product from French outfit Feeltune. Called the Rhizome, this unusual device is probably best described as a cross between a computer, a MIDI controller and a groovebox.

We’ll kick things off with the computer side of things: the Rhizome runs Windows XPE, an embedded (optimised) version of XP that has been tweaked specifically to work with the Rhizome. It’s a good choice of operating system, given that many PC musicians are still finding it the leanest and most stable Microsoft OS, and that its well-developed nature means it should be compatible with most VST effects and instruments. It has an Intel Core 2 Duo processor, with each core running at just over 2GHz, 2GB RAM, and a 250GB hard drive, which should be ample for running most soft-synths and sample-based instruments. 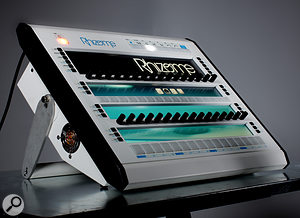 Where the specs get a little less conventional is with the built-in screens: there are four in total, each with a horizontal resolution of 1440 pixels, and all but one of them 128 pixels tall (the other being 250 pixels tall). The displays are flanked by rows of buttons and rotary encoders, the idea being that the screen shows you what parameter you’re tweaking, and the encoder next to that part of the screen tweaks it. The larger display (the one at the top of the unit) can be seen showing a piano roll in some of the demonstration videos (below), and Feeltune say that notes can be input using one of the rows of push buttons as a step sequencer. An external monitor can be connected to the unit, for those occasions when more screen real-estate is required, or, alternatively, any plug-ins hosted by the Rhizome can have their parameters adjusted from another computer, via a network.

The Rhizome has a built-in audio interface, with two inputs and eight outputs. The two inputs can be used either for processing live audio or for sampling, while the eight outs mean you can send different mixes to different destinations (to the front-of-house system, stage monitors and a recorder, for example). Six of the outputs appear on line-out jacks, while the last two are meant for plugging in a set of headphones. There are also two MIDI inputs and outputs, so you can use the Rhizome to control external synths, or augment the Rhizome’s control capabilities with another MIDI controller (such as a keyboard). And rounding off the I/O complement are four USB ports and two PS/2 ports, for connecting USB MIDI controllers, dongles, or a mouse and keyboard.

Software-wise, the Rhizome features a 64-channel, eight-bus virtual mixer. Each channel and bus has a built-in EQ, compressor and stereo widening effect, and can also host up to three VST effects of your choosing. The mixer has three aux buses and one master bus, and all bus routing is freely configurable.

Two samplers are built into the Rhizome: the Drum Sampler, a simple affair designed for building up rhythm parts, and the PGM Sampler, which has more complex synthesis and modulation options for creating your own instruments. Both are fully featured, and allow you to record audio (via the two line ins), adjust trim and loop points, and normalise samples.

No price was available at the time of writing, though we do know that the first units are due to be shipping around October. And if the wealth of features listed above has left you a little confused, don’t worry: we’ll be reviewing the Rhizome in SOS as soon as we can get our hands on one!