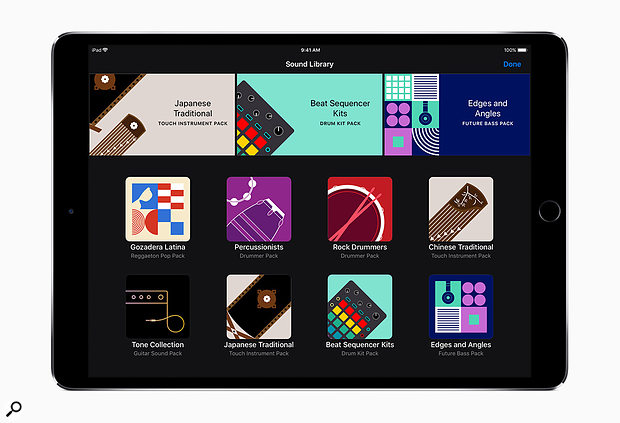 Garageband for iOS comes free with every iPhone and iPad, making it one of the most widely owned pieces of recording software on the planet. And its latest incarnation, version 2.3, is a significant update that makes it a more serious music creation tool than ever before.

In terms of pro features, GarageBand for iOS now allows you record 24 bit audio, something that has not, until now, been possible. Also version 2.3 gives Audio Unit developers the option to use full-size user interfaces within GarageBand. Moog Music are the first to take advantage of this with their exemplary Model 15 app. You can now load this directly from GarageBand. 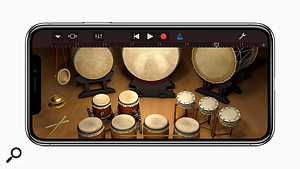 Logic Remote also receives an update supporting iPhone X. The key new feature here is that Chord Strips have been added to the iPhone interface — a feature previously reserved for the iPad version.

The big new headline feature in GarageBand for iOS 2.3 is the introduction of the GarageBand Sound Library. With an interface reminiscent of the App Store or iBooks Store, the GarageBand Sound LIbrary is a repository of constantly updated content that can be downloaded into GarageBand, and it’s all free. This means that people who are only casual users of GarageBand needn’t use up all their storage, while heavier users can install, or uninstall, as much content as they like.

Next up is the inclusion of the new, but very familiar, Beat Sequencer inspired by the classic drum machines of yesteryear. With 16 steps per view and up to 64 steps per pattern, this represents another way of inputting drums in your GarageBand projects. This also means that with Logic integrations, you’ll be able now to start your productions on the Beat Sequencer and pull that directly into a Logic Pro X session. You can also record played patterns into your project and adjust them on the fly with randomisation settings, a Chance control, Note Repeat and by adjusting the loop length on a per-track basis.

Apple have included a suite of three new Asian Touch Instruments. Joining the Pipa and Erhu are digital representations of the traditional Japanese Koto and Taiko instruments. Also, from the Chinese tradition is the stringed Guzheng instrument. What’s nice here is that once you learn to play one or other of the Guzheng or Koto, you can play the other. Strumming, plucking and tremolo effects are all available. For the Taiko, the centre of the drums sound boomy and resonant, while the edges produce woodier tones. Place two fingers in the centre of any drum to make a beat and finger spacing controls the tempo of the rhythm.