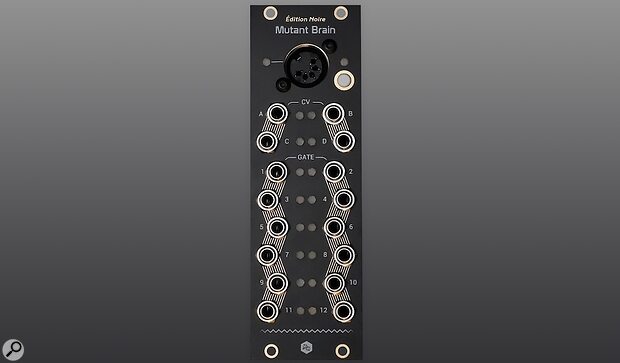 Erica Synths have announced that they will be taking over the manufacturing and sales of several of Hexinverter Électronique’s Eurorack modules after the company’s founder announced that they would have to cease production due to supply chain issues. The first module to be re-released by Erica Synths is the Mutant Brain, with the Mindphaser and Mutant Machine both expected to follow later this year.

The Mutant Brain is an 8HP module which allows Eurorack systems to be connected to MIDI gear, housing a five-pin DIN MIDI input connector along with a total of 16 configurable outputs. There are four CV outputs and 12 Gate/Trigger outputs, allowing modular systems to receive triggers, gates, clock divisions, and sync signals from MIDI controllers or instruments, as well as velocity information, sequencer transport controls, LFOs, and more.

The module has been designed with live and studio performance in mind, and aims to avoid complex menu-diving interfaces and wasted panel space whilst offering a more versatile solution than ‘auto-learn’ MIDI interfaces which users may find to be limiting due to the increasing complexity of modern modular setups.

A web-based Mutant Brain Surgery utility allows users to assign functions to each of the module’s outputs, which can then be sent to the Mutant Brain via a MIDI SysEx file, where the configuration will be stored for subsequent use.